A loop around Disentis

On the second day of the year I could finally do a little hike.

My sister lives in the Surselva valley, not far away from Disentis. They have some touristy infrastructure. You can take an aerial cabelway up into the mountains and then there are further ski lifts. However, climate change brings warmer temperatures and therefore less snow. All the skiing infrastructure is located around 5900 feet and above. The responsible for the resort claims, that they have enough snow. If you speak with the locals, you could gain another impression. This year, snow came in January. It is supposed to come in November.

My sister claims, that the ski lifts are located to low and therefore they face problems. Disentis is not a premier destination in Switzerland. People who can afford ski holidays in Switzerland usually go to more prominent destinations such as Flims, St. Moritz, somewhere in the Valais or Lenzerheide, where also Mr. Roger Federer has a holiday home. But most of the tourists go to Austria anyways. Half the price compared to Switzerland, locals in Austria are twice as friendly. Some destinations in Switzerland are doomed. Arosa looks like standing still since the early 70ties. Building permissions must have been extremely easy to obtain in some point of time. The town looks just ugly. Near Disentis there is Sedrun, also not extremely pretty. There is a mountain pass to go to Andermatt, the ski resorts are joined. In Andermatt, an investor from Egypt has promised to invest close to 2 billion. Mr Samih Sawiris is a nice guy for sure, the question is, if he has lived for some weeks in Andermatt.

The town used to live from the Swiss army. They used to have huge installations and training grounds, one of the four most important strategical bunkers in Switzerland is still there. A datacenter, where they plan to have headquarters in times of war. Theoretically, this bunker is a national secret. However, the army asked the authorities in Andermatt, if they have a use for the warm water the army produces. The protocols of the meetings are not secret.

Andermatt is located deep down in a mountain valley. You either have fog or cold wind. Sometimes the wind blows away the fog. And the pass street over the Gotthard mountain crosses through Andermatt. If the weather is nice you can be sure to hear more traffic noises, especially from motorcycles as it is somehow fun to drive over the passes. The term Kawasaki-syndrome in medical language describes a serious illness but here it is also used to describe the increase in organs available for transplantation on sunny days in springtime.

There is not a single successful resort development in the European alps. Towns like St. Moritz were successful in the past, because they grew slow and sustainable. Mr Sawiris wants to build a copy of St. Moritz in Andermatt. Just look at the surrounding mountains and you can guess. Of course, I wish Mr Sawiris every success in the world, especially if he finds ways to setup his resort in a sustainable way regarding the environment… Sawiris also brings jobs to the canton of Uri.

The locals in Disentis were not especially happy about the snow situation. They are paid by the hour to work for the ski lifts – no work, no payment. Most of these workers do this over winter only. In their normal life, they are mountain farmers and live from subsidies from the government. They don’t earn much but they work extremely hard. Most people would prefer not to do such an insane job – you work 16 hours a day and you can’t just take a day off – the goats can’t wait another day and must be feed twice a day. My sister and her husband both have jobs outside of agriculture and higher educations. Somehow rad for their living location.

I start at 4190 feet but must first move down some 400. From the kitchen of my sister’s house you can see the dogs in Disentis. To go there, you need 40 minutes as there is a giant trench or a valley (where one of the Rhines flows through). Just outside of their tiny town I can spot up to 4 chamois grazing in the sun. The Surselva is known for deer and the hunting season is a must for every self-respecting man over the age of 14 or so… The season in 2016 was during 21 days and the hunters managed to down some 10’000 animals in the canton of Graubünden. Two hunters fell to death as the terrain in the mountains can be dangerous. And there are rumors of other incidents I don’t like to repeat here. But it has something to do with the reason you should wear orange during hunting season.

I did this route several times now, since my sister lives there for some 10 years. Most of the times I was with other people and couldn’t stretch my legs. This time I could and I climbed extremely fast upwards. My rule of thumb is to use half of the time they indicate on the signs. It was quiet in the forest, there was no wind. You could hear the squirrels rustling around. On top of the first mountain I was greeted by other alpinists. They were from Austria and they did carry the usual alpine stuff. Huge packs, heavy boots. But there was snow in the path and they were either in bad shape or scared, or both.

I had just a pair of Cascadias and I was much quicker. I worked with my poles to give me additional protection from sliding. It wasn’t a problem. I got a little concerned when I had to cross a frozen river. 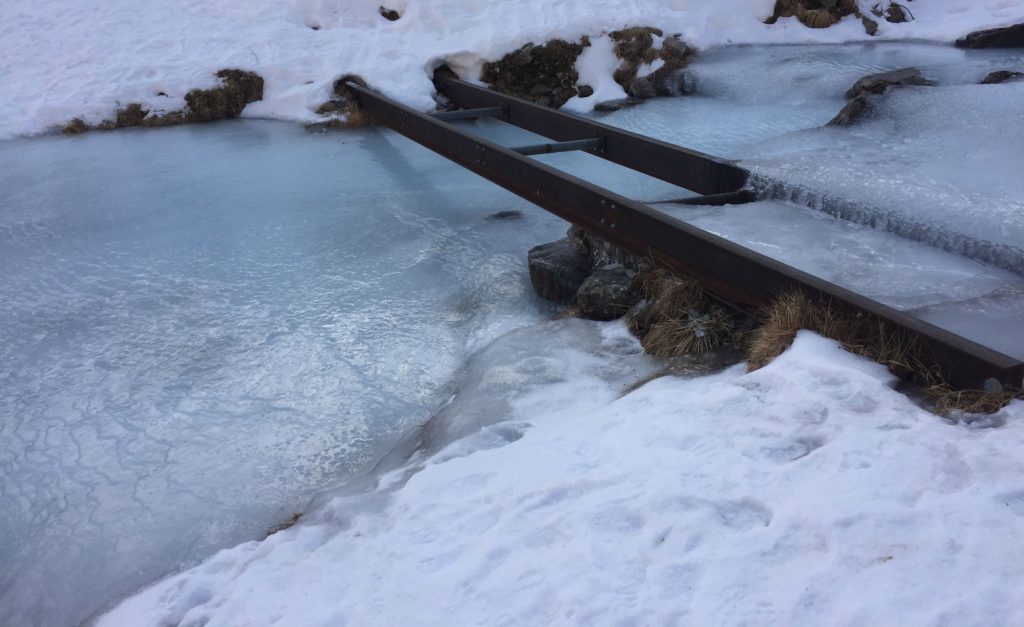 They remove the bridges in winter, assuming snow and avalanches, so I had to walk over ice – also this bridge gets some kind of boards in summer time. Shortly after, I reached the mountain end of the aerial cableway. They have a restaurant there and I considered eating something, also in solidarity with the hard-working farmers. Unfortunately, you could smell the restaurant before you could see it. I can’t stand the smell of frying oil. Therefore, no solidarity and I began to lose height again. I followed an educational path about the forest, most of the things I didn’t know. I always believed the pines grow much faster. A 3-foot pine is about thirty years old! Also, I didn’t know that Pines can be bend to the ground by snow in the winter until they reach a certain thickness. And so on. After five hours, I was back at my sister’s house. I couldn’t believe that I just did 15 miles with such an elevation chance. My feet hurt.

Unfortunately, I get sick when I’m there. This time, it was the second time and it’s frightening not to know why. One theory is, that the air in the mountains is to clean for me :-). When I look out of my room window, I see a huge chimney. It is no longer in use and under protection as a historic site, but maybe it’s all psychosomatic. And there is a mayor access road to the city right in front of my window. With artificial hanging space for the bats. And an art installation underneath.

Notable Accomplishments: Had fun, was fast, learned about the forest.