I found myself in a hotel in Hemberg and I was the only guest. I chatted with the host in the morning.

He even offered more food like scrambled eggs but I wasn’t in eating much. The room costs 80 Francs or 80 $ as the currencies are on par for the moment. For Switzerland, this is a steal. 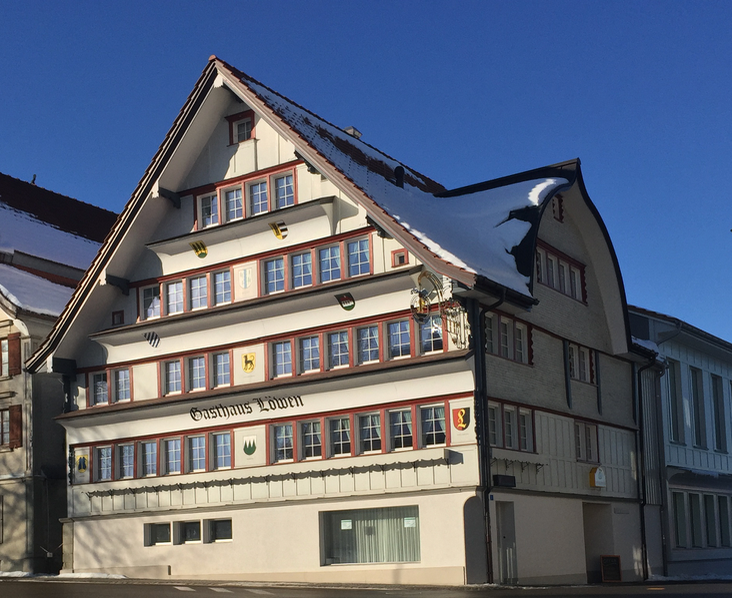 The Hotel in Hemberg

He told me about his attempt to the Greina, a must if you are in Switzerland or Europe. Unfortunately, he was too early in the year and they had snow. My biggest concern was the weather: If it would get too warm the snow would melt and I would have a hard time hiking. From Hemberg I went down to St. Peterzell again. 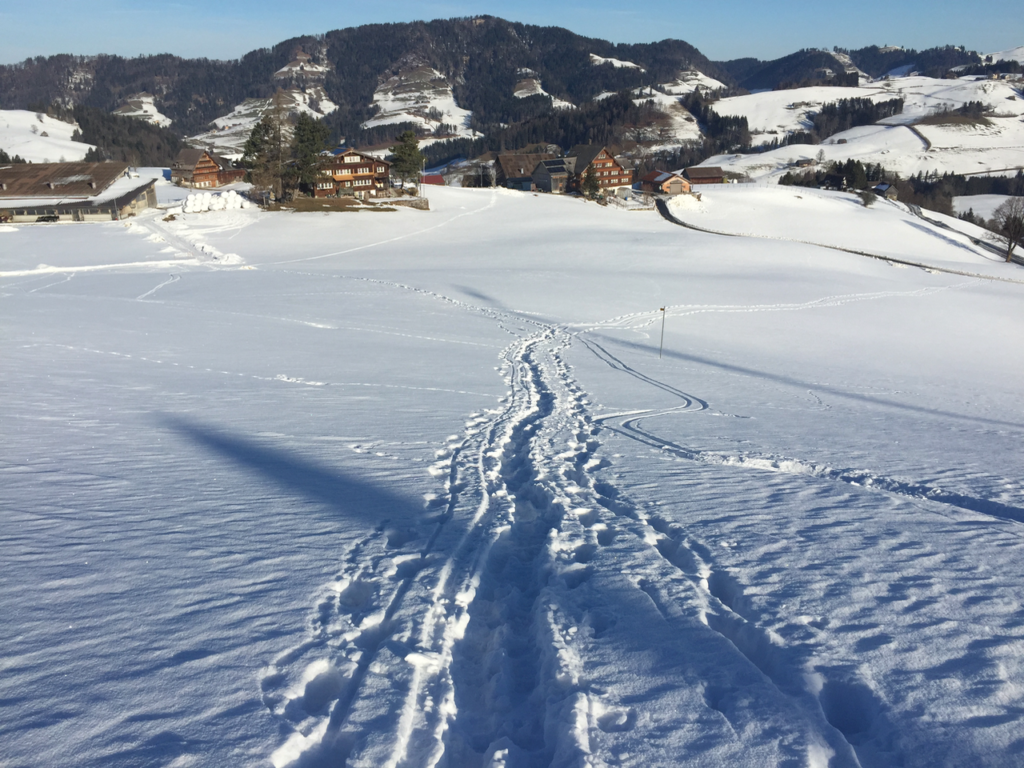 The path down to St Peterzell

I didn’t feel the need to climb up the steep hill I did already yesterday (before I looped) but my options were not great. I just didn’t want to do what I already did yesterday so I took a huge detour through a valley. I saw some people with cross-country skis and I followed their tracks on a road. When I was younger a so-called stone-cut on the cross-country skis was a must have, so these guys got a natural dirt cut. The valley is like lost. Nobody around I just pass a stable with Scottish highland cattle. Our farmers try everything, so you can see South American Alpacas or Australian Ostrich when hiking through the countryside. They even experiment with American Buffalos (while the European Buffalo gets reintroduced in his natural habitat in Germany and there are plans to do the same in Switzerland).

The path gets narrow and finally I stand in front of a hill. Just one person used the path in the last days as you could tell by the footsteps in the snow. The view is clear, the sky blue and I don’t want to turn around. It’s time to walk in fresh snow sometimes up to my knees. I don’t even get cold feet. 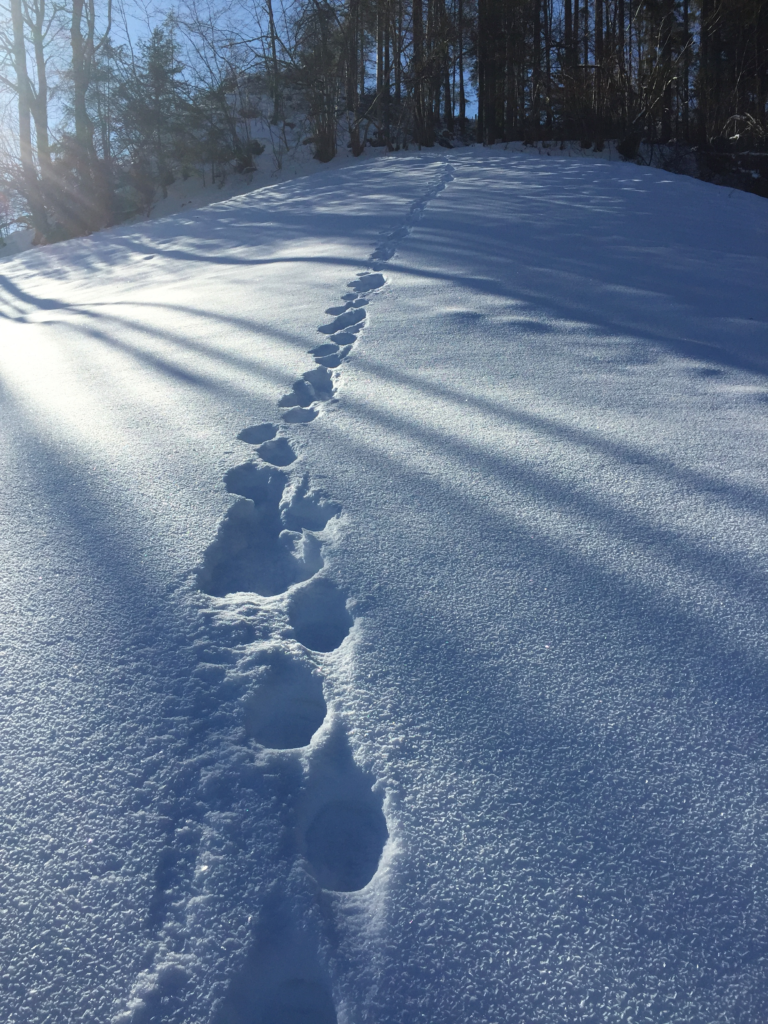 The landscape is lovely and after half a mile I am on solid ground again. Not even the dog stresses me anymore. I just continue walking and as he stands deliberately in my way I move to the side as a last concession. I swear, I would have taken my pools out if he chanced the side again. There are more holiday homes and parking lots where couples get ready to do snow shoe tours. I don’t get it. For what do you need snow shoes? I feel quick enough in my Cascadias although I follow the snow shoe paths occasionally. Up and down the sliding paths. 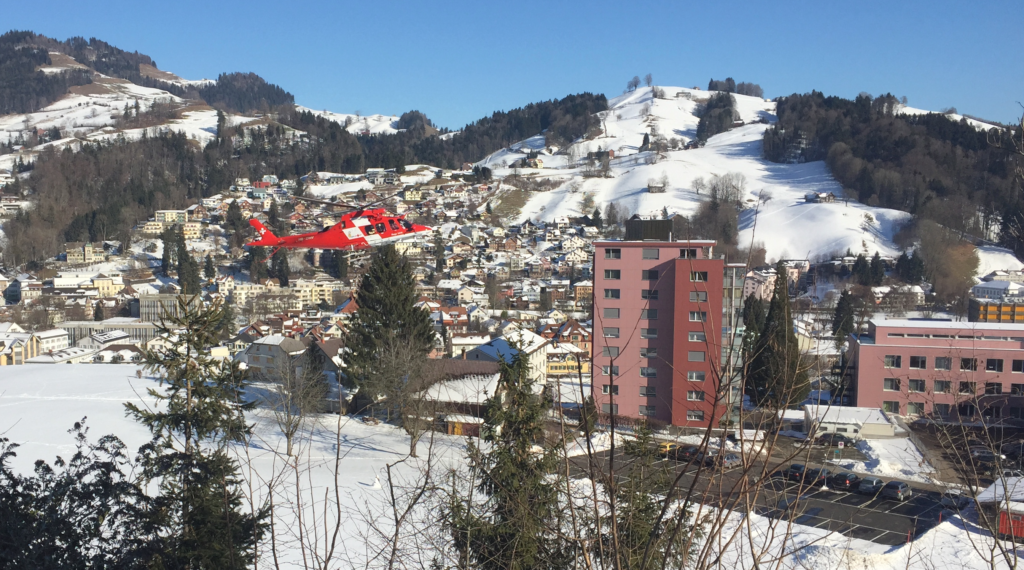 One of the best SAR Systems on the planet

I reach Wattwil, where a SAR helicopter from REGA delivers an unhappy skier to the hospital. It’s Sunday and I hear helicopters the entire day. There is sometimes a debate about whether folks call these helicopters out of comfort considerations. Most of the bills are covered by the health insurances companies, or if you have a job, by the insurance of your employer. Both things are mandatory by the law in Switzerland. You can get an additional patron status for 30 bucks a year. By doing so, you are automatically insured worldwide. They may not come and get you in Aleppo or Mosul but if you develop a medical condition let’s say in Bali, they have special ambulance jets and they will fly you back to Switzerland. And they pay for SAR activities worldwide. It’s an amazing system with zero costs for the taxpayer but they have enough financial means to buy tailor made helicopters. There is even a research project of instrument flight for helicopters in Switzerland. This would mean they can get you at all weather conditions around the clock. And they also fly your cattle.

From Wattwil I have again to get up in the mountains. It looks crazy from the opposing hills, but I’m sure I will find my way. The snow gets deeper and I can see the prints of newer Lowa boots. Again, I share the way with sleigh riders. I catch the hikers with the Lowa boots soon afterwards.

In Switzerland hiking in trail runners is sometimes considered dangerous. However, I did more than 50 miles by now and had no problems. I’m not sure if this boot hikers could follow my pace.

After Wattwil I shot for St. Gallenkappel, where my phone dies again in the cold. Before I reach the town I saw a sign that made me happy: Schmerikon. This town lies on the lake of Zurich. There is a railway line. They have a store on the train station. I don’t need more. I just try to reach it in daylight. Which I do at 6:30 pm. Soon I am in the train back home.

Notable Accomplishments: Solid in road walking, got no longer stressed out about the dogs, reached Schmerikon in daylight. NO PAIN!

previousLake to lake: Arbon – Schmerikon 1/2
nextI should have done this earlier