I should have done this earlier

A small step for humanity, a big step for me. During the last weeks, I tried to increase my running mileage. The half marathon route was getting more and more boring. That’s why I ended up getting some height in it – and expanding it.

There is just one catch with this. The height is gained over just half a mile and it is so steep that I feared for my old bones when descending it and having all kinds of traction problems when ascending. The ice in the winter was not helpful. But there was no real alternative. If I try to do height elsewhere I would have to run through the city and I am too poor to own descent road running shoes. I just have trail runners and I don’t want to grind them down on asphalt. So, I find myself in front of the computer to find new routes. It’s not easy while my mileage kept increasing.

As I run more than a half marathon I had also to change my nutrition routine. To run a half marathon without food and water in the morning was no problem but I found myself getting hungry when nearing 30k or 19 miles. I even did run the exact same route twice. Once with food and once without. I may sound simple but it has quite an impact on me. Sports food is expensive. Mayor brands contain things I don’t like (like Palm oil).

Then there is the problem of transport. I tried a lot of things. Running backpacks never sat right. Running belts from Asics choke you or they bounce. You can’t wash them so they stink. My equipment budget is not endless. Nothing helped until I blasted more than 200 $ on a Salomon running vest. I had to use self-defense: Retail here is horrible and of course they sold me a 2015 model for the price of a 2017. If you feel bored and have too much money you want to get rid of, try Jelmoli in Zurich – buying stuff there has the same satisfaction factor as flushing money down the toilet. Pay more, get less and wait 15 minutes or longer for an incompetent vendor. The kind that confuses the size m with m for men. I talked the vendor in gifting me two of these flexible Salomon bottles, claiming they were included (which may not even be true). They cost 60 $ alone here and I made sure, I got the better variant. No, I do not feel guilty.

These bottles feel really strange to touch, Mr Newberry warns you even from the nipple effect. I don’t get it. Take two sips and the bottle folds enough to disappear inside the pocket.

Together with an additional blather I have now 2.5-liter capacity. And this is necessary. The vest sits perfect, you can wash it and they even thought something when designing it (and they improve it every year). You can store your drinking hose snug. There is enough place for a jacket and food. It even has a pocket for keys and for Kleenex (I like to blow my nose in style, you know).

Encouraged by the massive improvements additional nutrition gave me, I started to think about marathon distance. I always wanted to run a marathon with a security margin. I don’t want to crawl and I don’t want to end in an ambulance.

Again, it was time to find a route. I am picky, no road walk, no traffic, nice scenery but no snow in February. Exit points and the list goes on and on. Oh, and not too much height, as I am lazy. So why not run along the Rhine?

The forecast predicted rain the entire week, except on Monday. I did my 18 miles on Saturday, my watch claimed that a recovery time of 2 days was necessary. Of course, my watch is always right, it even predicts your power level after 5 minutes of running. It tells you how much you are lacking in percentage. Why listen to your body, if you have it on display?

It’s like the sports drink. The most prominent Swiss marathoner, Viktor Röthlin, promotes it and it prevents your muscles from getting fatigued, thanks to its formula. If it wouldn’t be true, they wouldn’t write it on the packing…

So, it’s Monday. I hop in the train, getting stared at in my running shorts and my serious looking vest. What can I do? I still have no friends that are ready to support me on a marathon on less than 12 hours’ notice. It would require them to drive out with a car or a bike and then wait for me for some hours. I am still not sure if I can make it and it would embarrass me to have somebody waiting in the woods for nothing.

I start in the picturesque town of Bülach. Forget Luzern, Interlaken or St Moritz. Bülach is the place to be. As usual, the dogs are not educated. At least one is so small that he has problems keeping up with me. The next one is a monster and his owner sits down herself so she can hold it. I do one mile extra before reaching the Rhine. God bless modern navigation technology and my routine position checks.

One of the most beautiful parts of the Rhine in Switzerland

On the Rhine, it is smooth sailing most of the time. Lots of up and downs. I run on dirt roads and on small paths. Sometimes I must watch every step-in order to prevent me falling down the board and into the Rhine. My ankles are stable. I can set my foots on tree roots without loosing balance. Also after hours of running. I eat my power shots and I drink Mr Röthlins wonder juice. And I run. I even eat and run at the same time. I never feel slow and even after 20 miles I must brake from time to time.

I hiked this route before and sometimes I remember how long I had for some sections. These problems you will not face when running. Just think at something else and five minutes later it is done. 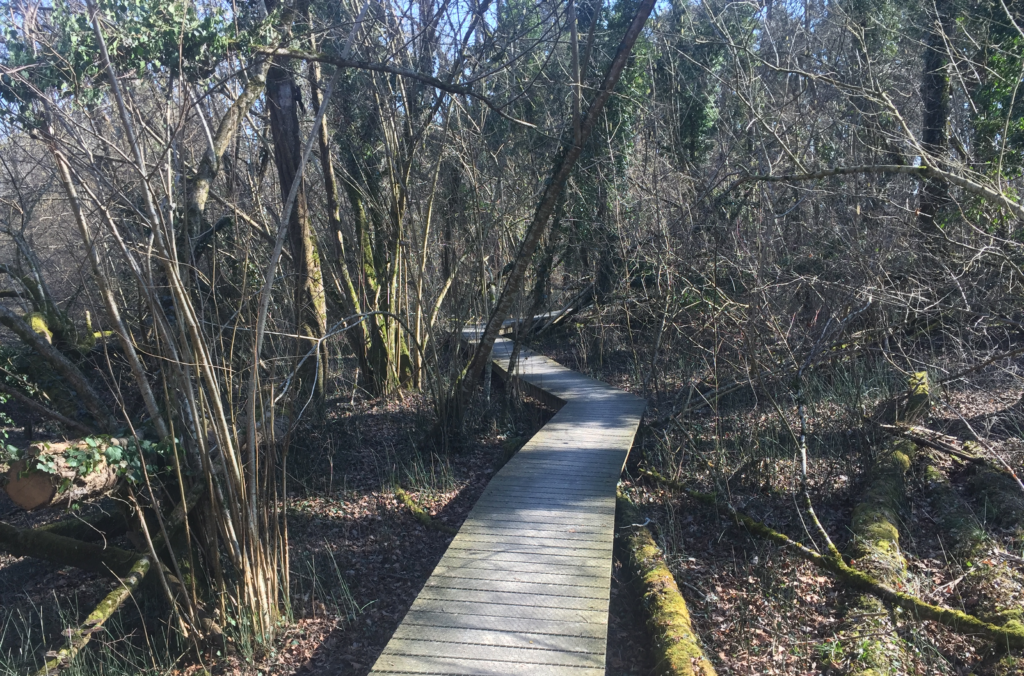 Soon enough I pass the Rhinefall and my watch shows 27 miles. I did run a Marathon. Just to be sure I run into Schaffhausen, getting 28 miles.

You can always do more. There are enough hipsters on Youtube who can give you the impression, that everything under 100 miles ultra-running is for hobbyists and weekend warriors (they will not tell you this directly but you know, their lifestyle…). I guess a marathon gives you somehow a basis, also for serious hiking. Until now I just found too many excuses for not attempting it. Now I feel more confident when crossing hills.