Up to the mountain tops 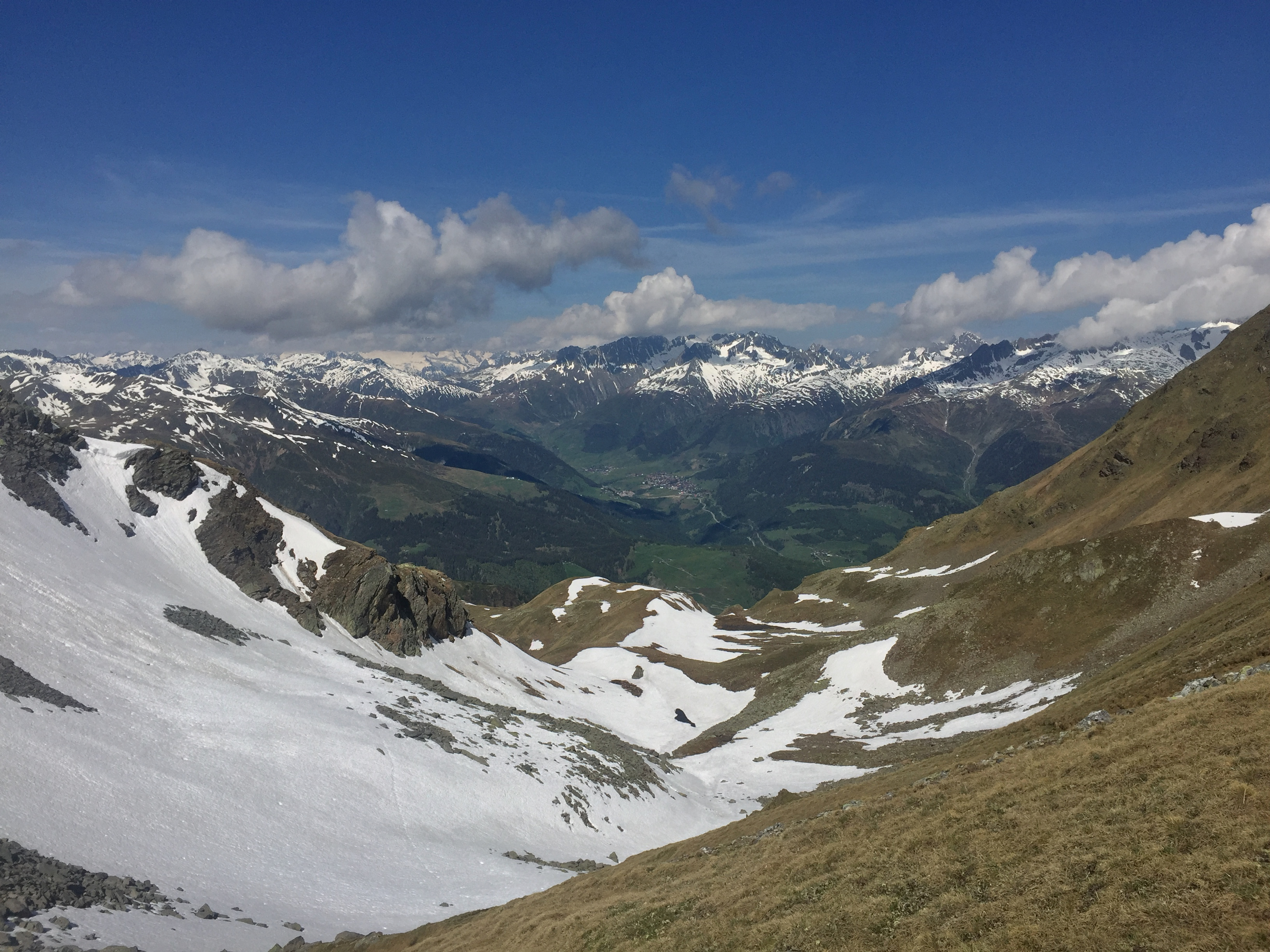 It’s a prolonged weekend in Switzerland and so I have the opportunity to run. In the mountains.

My sister and her husband sometimes still don’t feel comfortable with my desire to run for hours but I explain them what I want to do and they are supportive. So in the morning at six I sneak out of their house. Mompé Medel is on 1304 meters or 4278 feet but first I have to change the valley. So I start with going up 650 feet and down the same amount. Yesterday I bought real grippy shoes: Salomon Speedcross. They are not useful for walking. Equipped with Salomons lacing system they are incredibly small anyways. On hard surfaces like concrete they are noisey. But they grip like they were nailed to the ground. In Curaglia I start my ascent. It will never stop until I reach 9180 feet. It rained the day before so the air is fresh. Everything is fresh, including my legs. No problems at all.

This is wolf territory: People saw single wolves in this valley and at the same time there are a lot of farmers herding sheeps and goats. The farmers are worried. They changed the way they let their sheeps graze. For me, this means that I could potentially come across sheep dogs. Already there were accidents, in Germany a shepherd dog killed a woman this week. I rely on my pepper spray and my poles. There are no problems with dogs the entire day. The wolf population is still closely monitored in Switzerland. Every single wolf gets identified by his DNA. When a wolf kills too many sheep, permission is given to shoot him during a limited amount of time. However, there are wolves who go away. Currently, there is a permission to shoot an individual wolf with the name M75. He must be a sporty guy and his whereabouts are unclear. They think he is in Germany but he did kill sheep all over eastern Switzerland. There are no reported bear sightings at the moment in this region. However, one bear was seen in the canton of Bern last week. It was quite a thing, because the last bear in the canton of Bern was seen 190 years ago. I always hope to see both species. Unfortunately I didn’t see them the entire day. 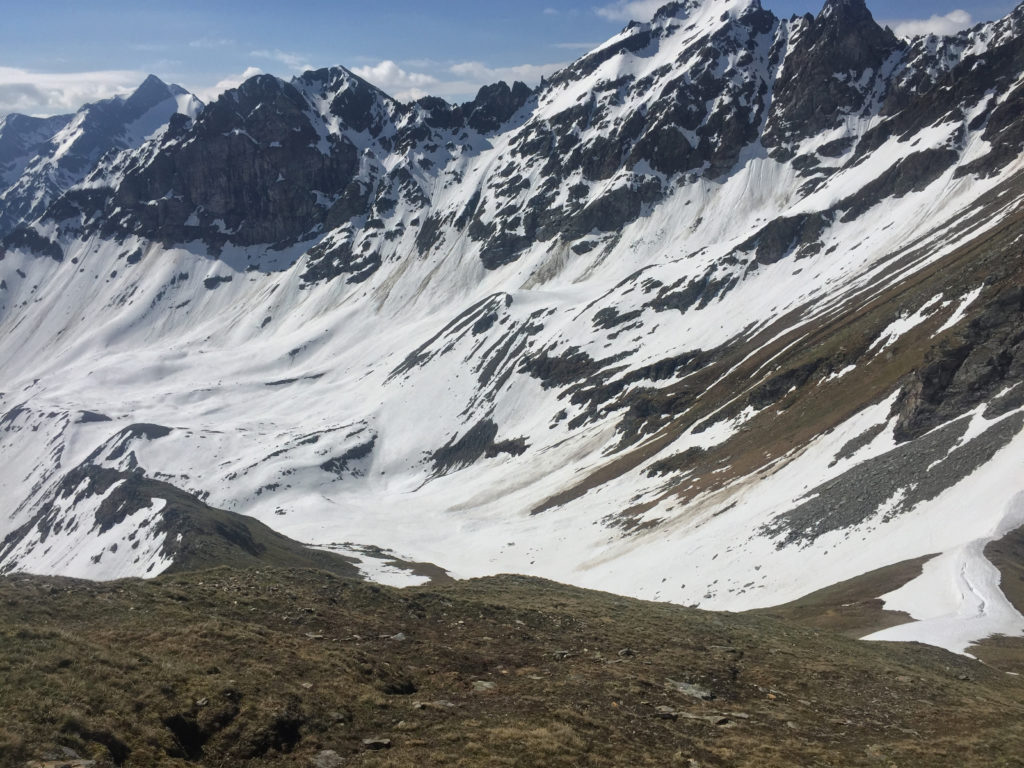 I use my poles to climb. Because of the height I breath with a high cadence but I don’t have problems. I can climb and climb. Actually my climbing abilities surprises me. I take big steps, something you shouldn’t do when climbing but I like to fly through the landscape, even when this means to eat the height. A chamois crosses my path less than 12 yards away. At more than 6500 feet the surface is still heavy corroded, cow pads are everywhere. The deer retreats to higher altitudes in summer, to move out of the heat in the valleys. There is deer poop clearly visible. Snow melt wasn’t long ago as the vegetation lays still flat. Soon I have to cross the first snow field. The snow isn’t even slushy. It is like foam. One step and I sink in knee deep. I need another strategy to cross the snow fields. However there is not much snow and I can run around it. I see many Marmots but not one human soul.

Unfortunately I run out of luck pretty soon. There is small snow patch but the terrain is steep. The snow is harder at this altitude than it was before. I have to cross less than 15 yards of snow but I decide not to do it. One unsure step and I would slide down 100 feet on snow and into sharp rocks. I don’t carry self arresting equipment. The snow field is located in a rock field. I have no other choice than to carefully walk down on one side cross the snow patch where it is flat and climb up on the other side. It is worth it. Soon enough I reach the highest point of my pre planned marathon route at 8530 feet above sea level.

There is no way forward at this point. The way is buried under 5 feet of snow. It is not safe, not even with snowshoes because there are huge cracks in the snow. I decide to try to reach a peak instead. The Piz Muraun is 9500 feet high. Although there is no way, it seems doable from this point. The forecast predicts rain and thunderstorms in just 4 to 5 hours and I am well above tree line. Again I climb up avoiding more snow patches. I can see the peak with its cross but I can’t reach it. There is snow and a stone wall, too dangerous. So I take some pictures and start the descent. Through the rock fields I can’t use my poles so I carry them in braveheart style on the outside of my vest. I fly down the mountain but I am still surprised how much it goes down.

Again, the warning whistles of the marmots bring the stone fields to life. The snow melting feeds a somehow dramatic waterfall. I can understand why some people spend every minute in this kind of rugged terrain. Some would say that it is breathtaking. Somebody cleaned the way with a motorized scythe in Curaglia. I can tell, because it is not possible to move that much dirt with a simple cord trimmer. It is noon, the farmers have moved their cattle to the fields. The cows are skinny – skinnier than those at my normal stomping grounds around the lake of Zurich. I have to pass several cow fields. The cows stare at me. I decide to do a last ascend of 1300 feet.

Meanwhile I am on the trails since 7 hours and I didn’t eat enough. My watch tells me that I used 3000 cal and I drank 2,5 liters of a long energy beverage. Did try another one (Sponser) but it is extremely sweet. I did lose 5.5 pounds in weight.

I am super happy about this trip. My knees did not hurt on the next day. This was phenomenal given the amount of descending and the steepness of the trails. I spent the next day inside the house but was lucky enough to spot a Golden eagle with the binoculars of my sister. They tell me, that the eagle was responsible for the loss of two lambs – but the same farmer fed his sheep power food, they then developed too much proteins and therefore additional 10 lambs died.