Wolf watching in the Calanda: Day 1 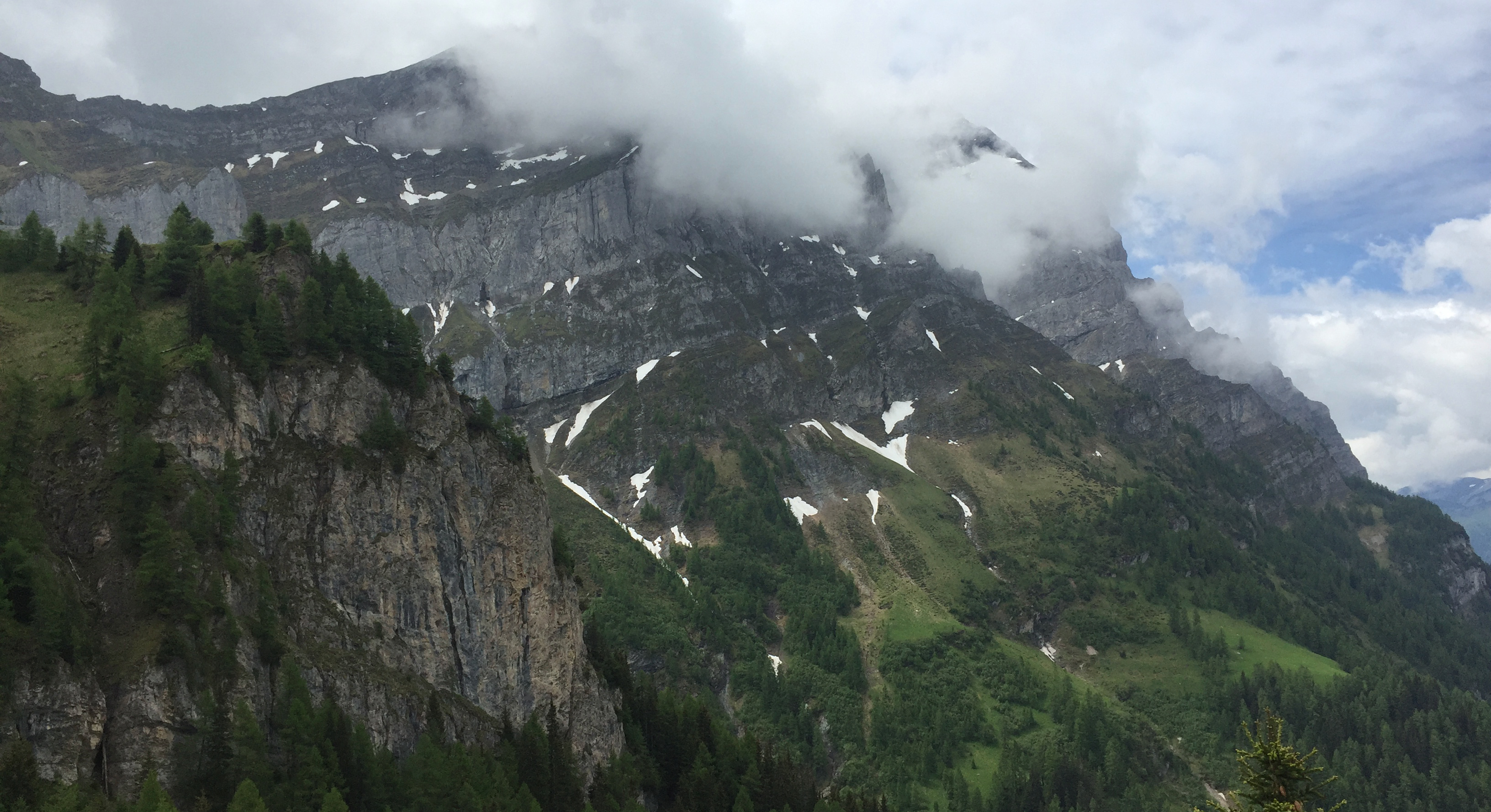 As I am tired of the lake of Zurich I wanted something else. It needed still to be near, so the train fees would not be too expensive and I did not lose too much of my precious weekend time. Therefore I went to the Calanda. Side effect: There is a wolfpack living there.

So I start by taking the second train in the morning. I wanted to take the first one but I got into panic that I forgot my phone and turned around just to find my phone in my backpack. So I miss the first train just by one minute. Railway police is arresting an intoxicated youngster. When moving that early in the morning to the main train station of Zurich usually you see a lot of party people. However, they are all much slower and sometimes they can hardly walk straight. I can reach my pepper spray even when it is stored away in my backpack.

And my legs are somehow trained. I did the last marathon on Wednesday afternoon. I had to check out the new green marathon route in Zurich. They promised that the route is now fully marked. It isn’t and one side of the city it isn’t green at all. Where it is somehow green, it is boring. There was an association founded just to maintain the route. They are sponsored by On running. A clever way to get new running shoes from a hipster brand. I lose a lot of time in finding out where to go.

I was in Landquart before 8 am. This town has some industry and it is located on 563 m or 1847 feet of height. I start to climb up to the Alp Salaz on 1774 m or 5882 feet of height. Being an equipment freak I bought new poles the day before. Of course they have a catch: They can only be adjusted to 125 cm which may be short for me and they have just one telescoping element. So they can’t become short. They have however the trigger shark system as they are intended for nordic walking and they are lightweight. They can be swung easily and controlled just by the thumb. They are fixed to the hands between the thumb and the index finger. It feels weird for the first five miles and I am afraid that it generates too much pressure to the bones of my hands. It doesn’t and my confidence in this system grows over the weekend. It is so much better than the loops of ordinary trekking poles.

The paths are not extremely spectacular up to this alp but it makes sense that the real estate agent of family wolf has suggested them this habitat as their new home. The forest is open jet full of hideouts. The only sheep herd I saw during the morning is guarded by a human shepherd. I spot a road deer buck but no human soul.

Once the path leads to a dirt road there are cheaters. Men who like to eat and drink a lot but wear the latest in full battle gear for mountain bike races. There is a little bump, located near the pedals of their bike. I need to concentrate in order to not laugh out loud. It’s like going hiking in a palanquin but still wearing Lone Peaks.

There are tons of cows. Some herds are held in a mother cow system. Thereby the mothers are allowed to graze with their calves. However, it makes them aggressive and there are deadly accidents. I will have to pass through a lot of cows on the second day. The sky was full of clouds, there was rain predicted. It never rained the entire day. From the alp I descend to Vättis on 940 m or 3038 feet of height. I will easily do the double amount of height than last Saturday but at least I will know afterwards what my knees will hold out. 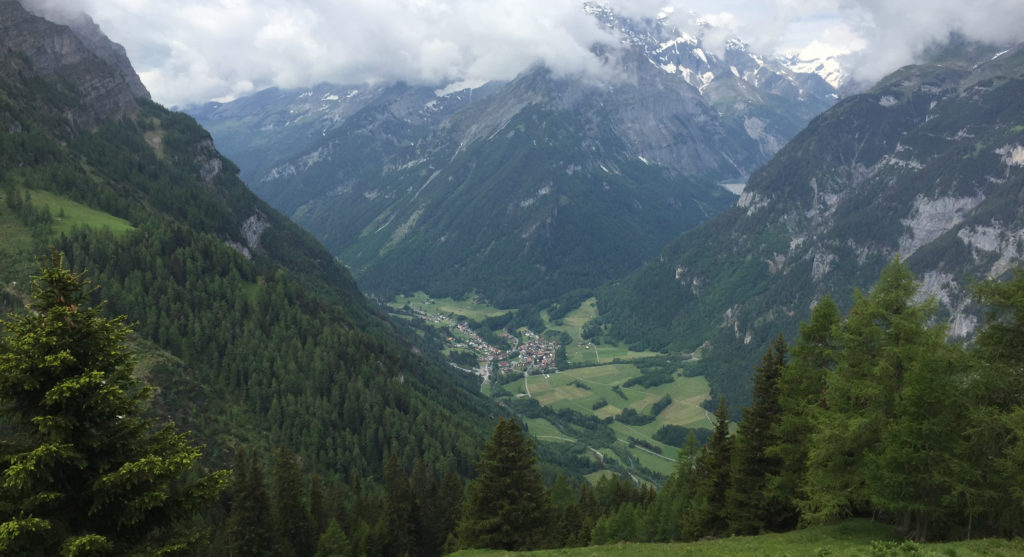 Vättis, had to go down

So I start to descend. Suddenly I see something running above me. I my wild fantasies I see a bushy tail and black legs. But the thing is too far away to be identified. It runs like a dog, maybe? I face other problems: The  streams are still full of snow and the terrain is really steep. I can’t afford to slip as I would found myself in rocks that are hundreds of feet vertical. You would be lucky if you could alarm emergency services yourself after a fall over this kind of cliffs. 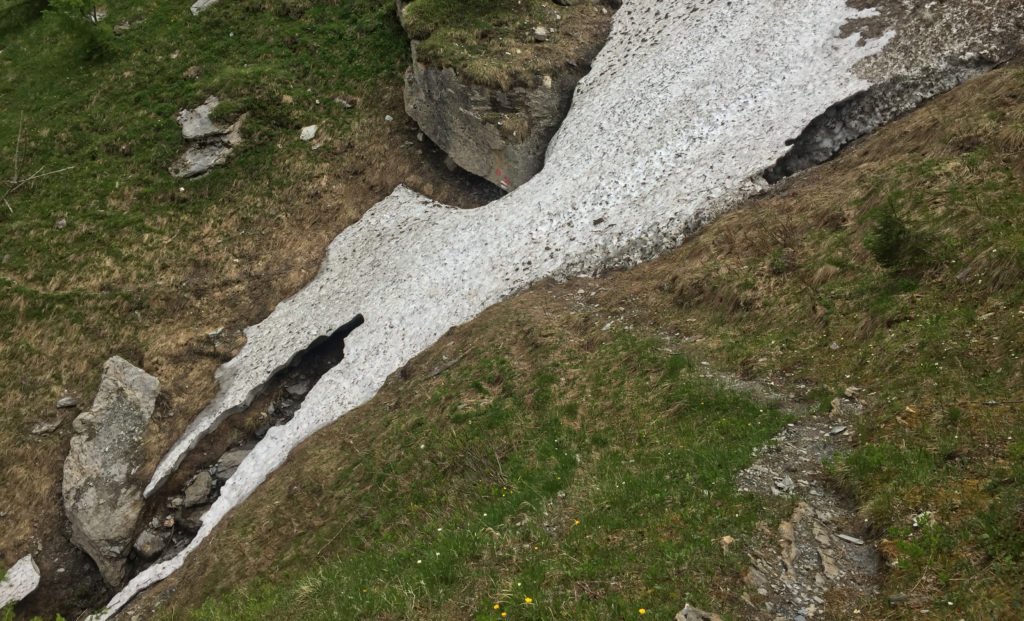 Under the snow is a tunnel and you don’t know if the snow will hold your weight. So I crossed in the down left corner…

On the first yet to cross downstream I am greeted by something furry. I clap my hands and the marmot turns around, looks at me and then slowly disappears under a rock. I can’t cross over the snow as it is too steep. So I walk down on the side until I find a gap. Shortly after being back on the way I see a familiar animal. It’s a chamois. Maybe it’s the same as before? We play hide and seek during an hour.

Shortly afterwards I reached the town of Vättis. It’s somehow famous because they saw the wolf in the middle of the town. Unfortunately it is not really a town, more a street with some houses. Even a human could cross the town within 2 minutes. As I come from the east I have to cross the town to the west and this takes nearly 20 minutes. The entire valley is full with holiday homes and agriculture.

There is a car from the organization chwolf.org. They offer excursions into wolf territory. Two days for 180 bucks. They stay overnight on the Kunkelspass. That’s where I am heading too. The forest near the street is ideal to hide. Steep with thick brush. Even the most fanatic hunter would have a hard time to follow a wolf in this landscape (that’s why they failed to shoot one some years ago). I reach the pass without problems, it is not so high up over the valley.

The pass itself was used since roman times. The usual suspects and bikers sun their fat bellies. The pass is just 1357 m or 4452 feet high. I head up to 2073 m or 6801 feet. The way up there is somehow steep. I don’t see a human soul but a female black grouse. Unfortunately I lost some time in navigating my way down to Vättis around the snow and it is already 5pm. Dozens of marmots watch out above the timberline. Some run, others see me coming and decide that I am not a threat. In the distance a big bird is gliding in circles. I believe it is again a golden eagle. I have to follow the height for some miles. Sometimes I have to cross sloped flagstones but I never slide. My Lone Peaks are like glued to the surface. I lose and find the way again.

Nobody is around at 5pm on this altitude. Two hours later I reach a hut and I decide to stay there during the night. If you are new to Switzerland but not filthy rich I don’t recommend to stay in this huts. They have their own culture and are organized by the Swiss Alpine Club SAC. They provide their own romantic and you pay for the event. If you are not a member of the SAC it sets you back 70 bucks. You are forced to sleep with dozens of others in a tiny room, there is no shower and collective eating. The plumbing of the toilets is somehow primitive, although they experiment with modern techniques to get rid of the waste in some huts. They have also their own way of hiking. When I enter the hut through the shoe room I am amazed by the other shoes: No trail runners but super duty leather boots. The heavier, the better. I don’t recommend this shoes unless you plan some snowfield crossings with crampons. There is no way I could walk 28 miles with such shoes and doing this height.

There is a caretaker team in this huts. They cock and they serve the booze. You can drink as much as you like. This adds to the sleeping pleasure for those who like to go to bed earlier. This particular hut is 100 years old and the toilets smell just like that. 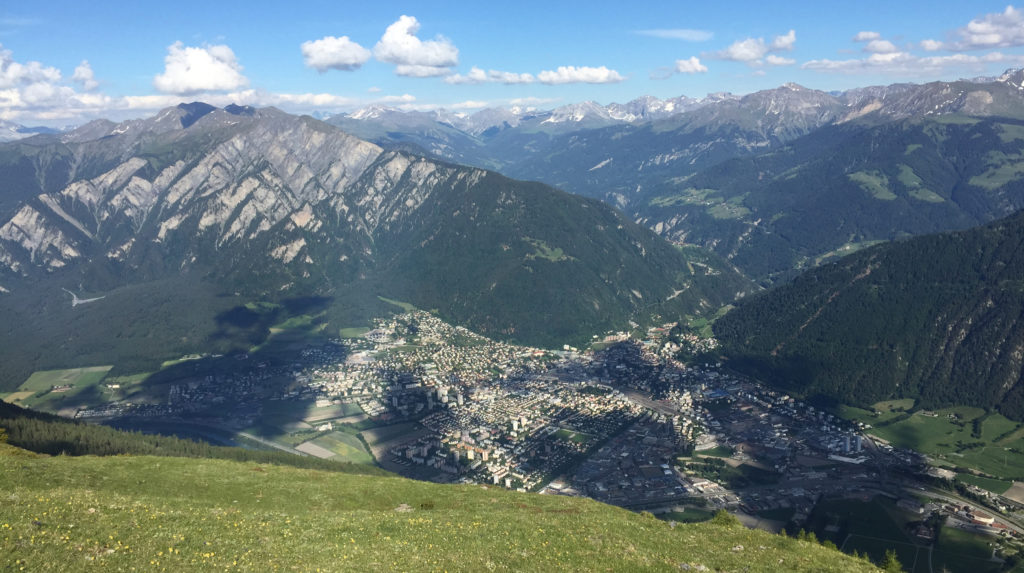 Chur from near the hut

Of course during the night I can’t sleep because everybody is snoring, others speak together and need half an hour to explain to each other how to use earplugs. My neighbor heckles the entire night. If you enter the room and others are already sleeping, make sure to have a powerful torch and point it to the others, apparently this is part of the etiquette in Switzerland. I swear to leave this place asap in the morning.