It is no longer cool to indicate your mileage. Since somebody ruined the expression you don’t even claim to be a thru-hiker anymore. Even if you are. Instead you claim to be a long-distance hiker. However, I still try to figure out how many miles I would need to do on any given trail to end it within a certain timeframe.

All my current trails were either under 5 feet of snow or I suspected them to be flooded. The water reached 30 centimeters higher in Saint-Ursane than the day I was there three weeks ago. The water flew into the old city and flooded more houses. I paused last weekend because of my right shin. It worked out great. The entire week I could really walk fast on the way to the office. It’s all cobblestone or asphalt. Plus, flat stone inside the main railway station. I bought road running shoes specifically because of my way to work.

By now I know several ways around the lake. Down by the lake and up on the mountains. I did several running excursions during 2017. I ran from my flat up to the Rigi or down to the remotest place on lake Zurich. My marathon route crossed to Sihlwald or even the lake next to lake Zurich. By now I know where the nicer spots are around lake. There are few and in between there is a lot of road walking and asphalt.

At the same time, I need to test equipment, all kinds of shoes and so on. And my own fitness. I did only one marathon this year. So, I have no clue. At the moment I don’t have even shoes to test. I know that I will never take these Salomon’s somewhere. I can walk in them, so I didn’t put them in the trash so far. Walking around the lake is a little bit far. It will take some time.

My phone wakes me up at four o’clock. Unfortunately, the floor of my room makes all kinds of sounds when you move and in the room under my room other people sleep. I prepared everything the day before, but I still need to move. I have no guilty conscience. They jell at their teenage daughters, often accompanied by heavy slurs. If they are allowed to wake me up with their questionable educational methods several times a week, I can have my revenge on four o’clock Sunday morning.

I leave the house half an hour later. I don’t have to go to the railway station, so I am absolutely sure to meet nobody in the city. I meet a lady in her fifties however in the Werenbachtobel. It is a narrow way there. She is on a bike but has seen the shine of my headlamp before I saw her. I forget to switch my headlamp to red light, but I practice it afterwards. Always try to treat other people like yourself would like to be treated.

Another lady overtakes me running. She carries a gun, for self-protection I assume. This means she is either a police officer, she has a special permit which is given just to a handful of people every year or she carries this gun illegally. She has a hard time to pass me as I still hike faster than other people run. Shortly afterwards I lose the way in the darkness. Doesn’t matter I reach the town of Forch from another side.

I hike to the railway station as I have business to do. I know even where all the public toilets are around the lake and where it is free to use them. I see a lot of deer – they never move or run away. And blowdowns. We are still in Switzerland, they have cleared all the ways since the storms Evi and Burglinde hit two weeks ago but sometimes the forest has lost a lot of trees. Huge pines apparently break near the ground while other trees manage to damage the soil while tearing out their roots. 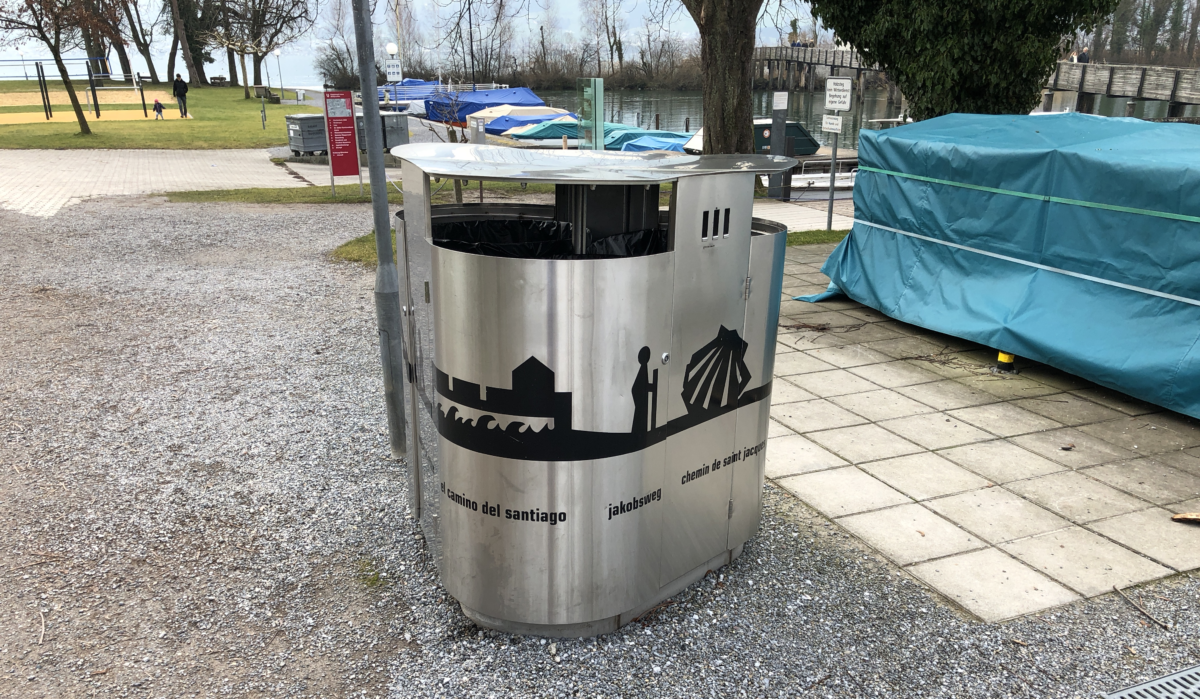 It’s hard to find a trail in Switzerland that isn’t on the camino de santiago. In Rapperswil they use this fact to improve the style of their trashbins.

The hike down to Rapperswil is uneventful. I hike without gloves. Thanks to newest smartphone tech I can snap some decent pictures. This hike is something for folks who like to see run down farmhouses in an untidy setup, cows walking in the mud and new cars. After all you walk along some of the richest towns worldwide. Tina Turner, Roger Federer and so on have houses here. Rapperswil has an Instagram account with the name I love Rapperswil. It must be hard to find enough things to take pictures of in such a small city. I do a little break and of we go. 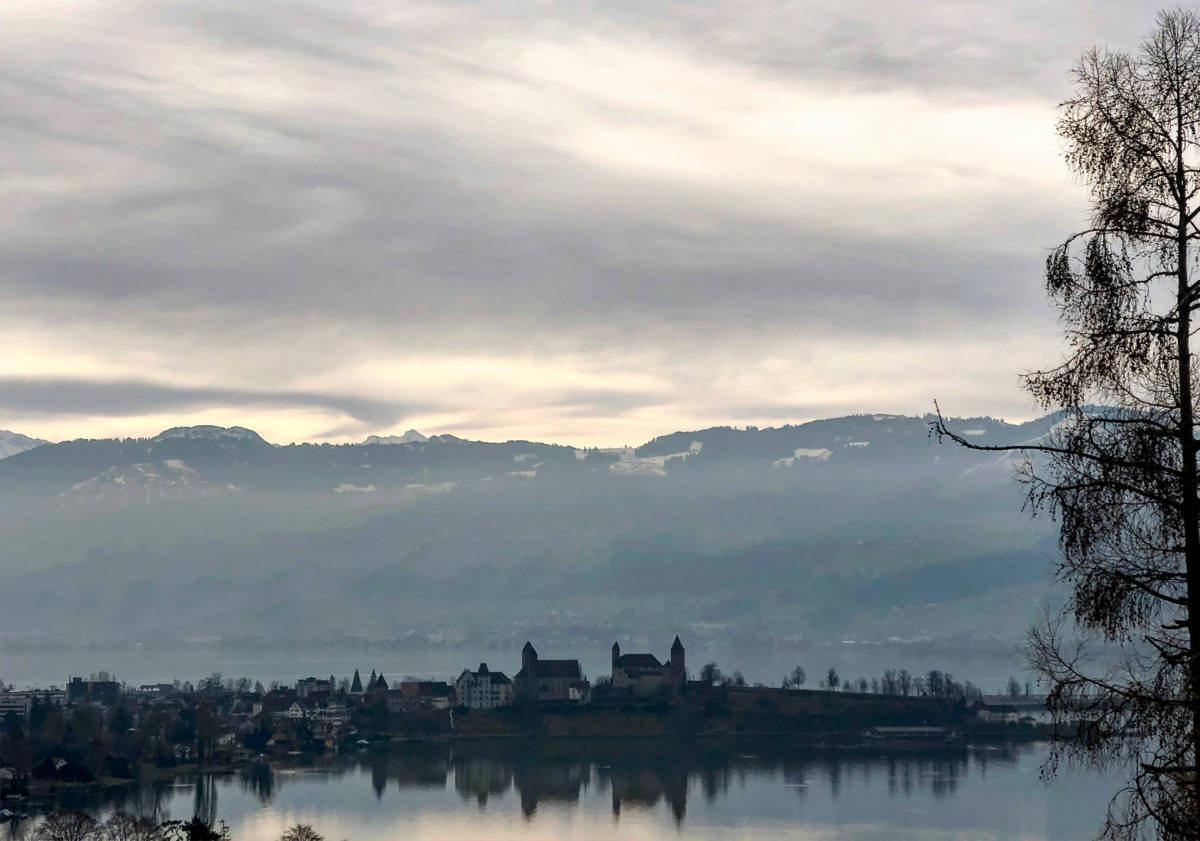 Folks do their Sunday stroll others ride their horses. In Freienbach they have a Carnival parade. More expensive cars and brand-new housing complexes. Extremely cheap built, they search for tenants. Two years ago, it was difficult to find something, now they have simply built to many new apartments. It would be lied to say my right shin doesn’t complain. It starts to do so however after 26 miles only. The pain remains bearable.

A little hill after 40 miles is good for the moral

In Sihlbrug a couple overtakes me. At first glance they seem to be ultra-runners. Their equipment is spot on, they wear Salomon wests and Gore jackets. They have even some kind of partner look. Something seems however out of place. As I climb I realize it: They are not runners, they just like to dress like runners. I overtake them at least three times.

The girl changes her shirt suddenly I look in another direction, but I can’t wait until Lady Wouldliketobearunner has changed. I think they are still busy with new year’s resolutions. I wish them the best luck ever. 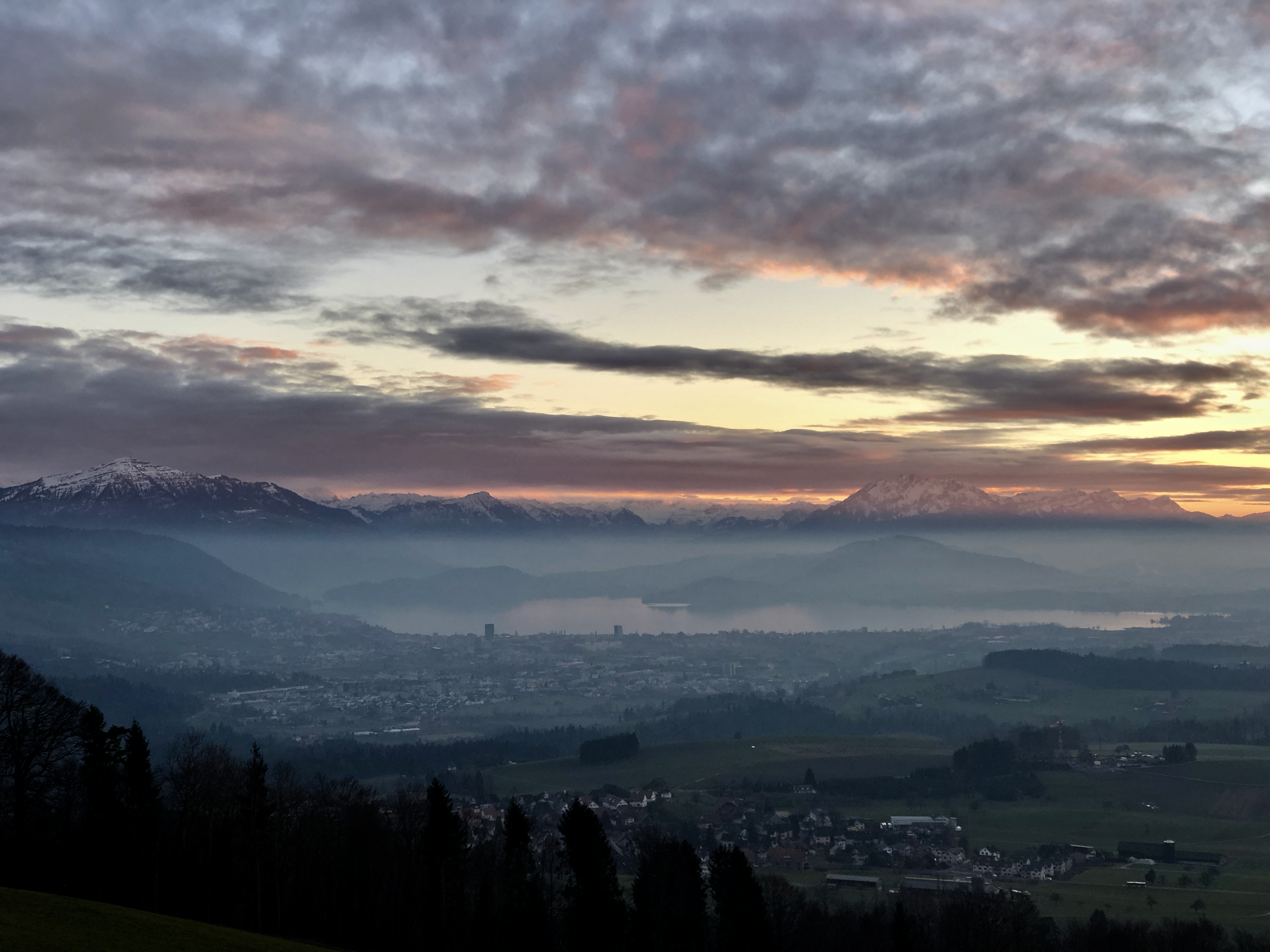 Time to get the headlamp out again and hike on for additional four hours. Thankfully my host has prepared dinner at home. His girlfriend is a real funny person. While they watch a broadcast about animal rights she talks about how she is looking forward to Ramadan. She claims to be Muslima, but she is as much Muslima as I am catholic. She usually eats pork during Ramadan, that is her Ramadan special. I am happy with my 16 hours stroll. It would be more than FKT pace on the AT. If I can hold this pace for just 40 days I would beat the FKT on the AT by far. And I have no pain whatsoever the next day although I walked for hours on concrete and asphalt. I managed to do 2300 m or 7500 ft in elevation change.