While the temperatures in Zurich have moved upwards, all my trails are still buried under snow. The Jura Crest Trail would hit Mont Tendre and it would be 1670 m. At least 1 m of snow. Nothing I could do. The Trans Swiss Trail, I also walked where ever possible, next would be Sörenberg, a winter resort, at least 2 m of snow. After an extensive search I decided to takle lake Geneva. 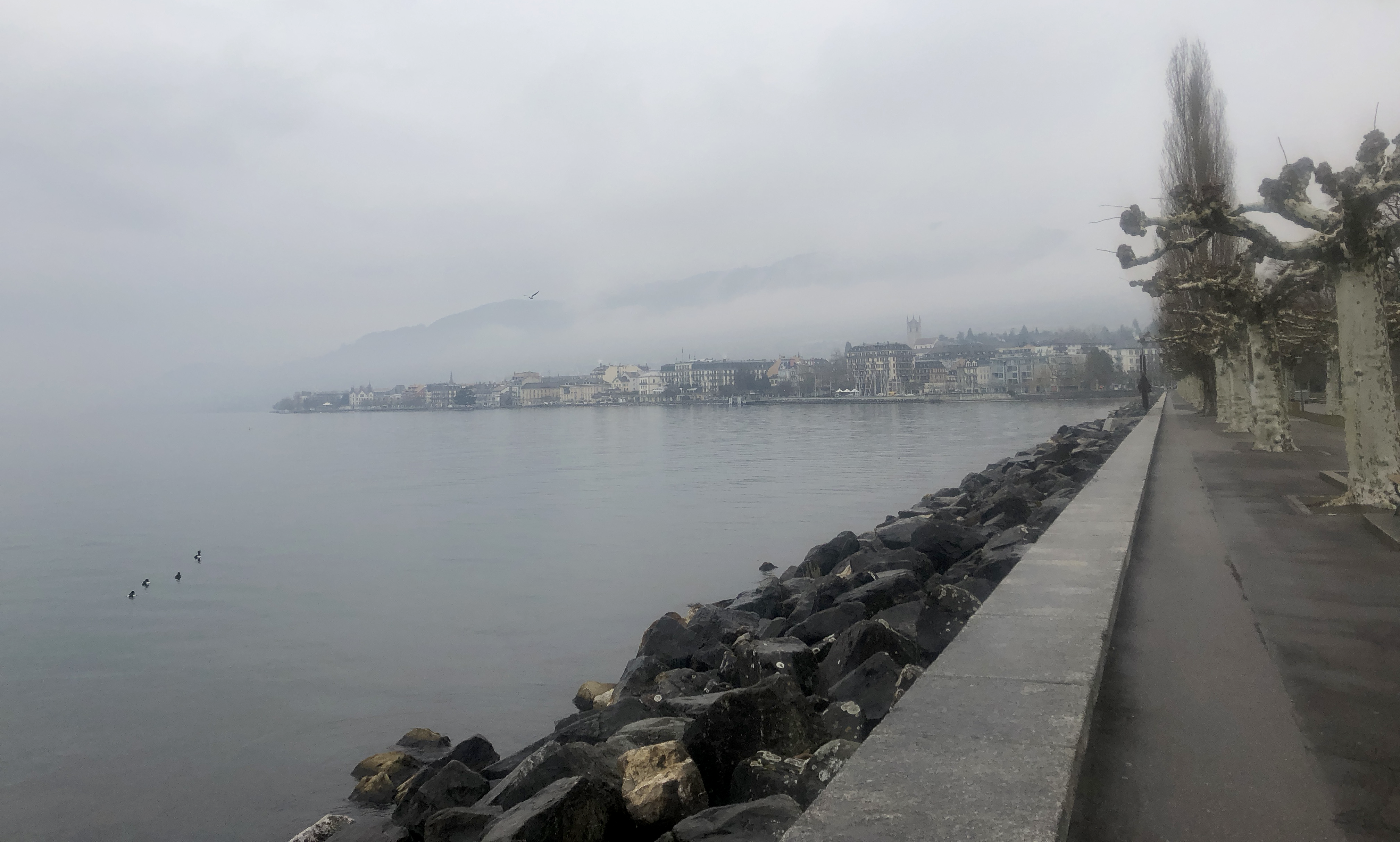 We are in Switzerland, the weather is what it is. For long-distance hiking, this is not as bad as it seems.

Theoretically, the distance between Montreux and Geneva could be within reach. However, this would require some 16 hours of time and this means to stay in Geneva over night. Along the lakes in Switzerland you can expect a lot of concrete and asphalt, so I took Hokas, as they have the best dampening of all my shoes. Railways bring me to Montreux for 40 bucks. On most of the route there is still snow, at least you can spot the wildlife better. I count 4 foxes, all of them west from Berne.

I know Montreux somehow as I have spent one night there last year. They must have a massive budget for their lake side ways and parks. Everything is neat and nice, they even have some exhibitions of nicely crafted art all over the place. Just after Montreux there is a short road walk but nothing to be concerned about, as there is enough space on the boardwalks. Several times I have to dodge sweepers who clean up the already reasonably clean road. The next step would be the usage of tooth brushes. 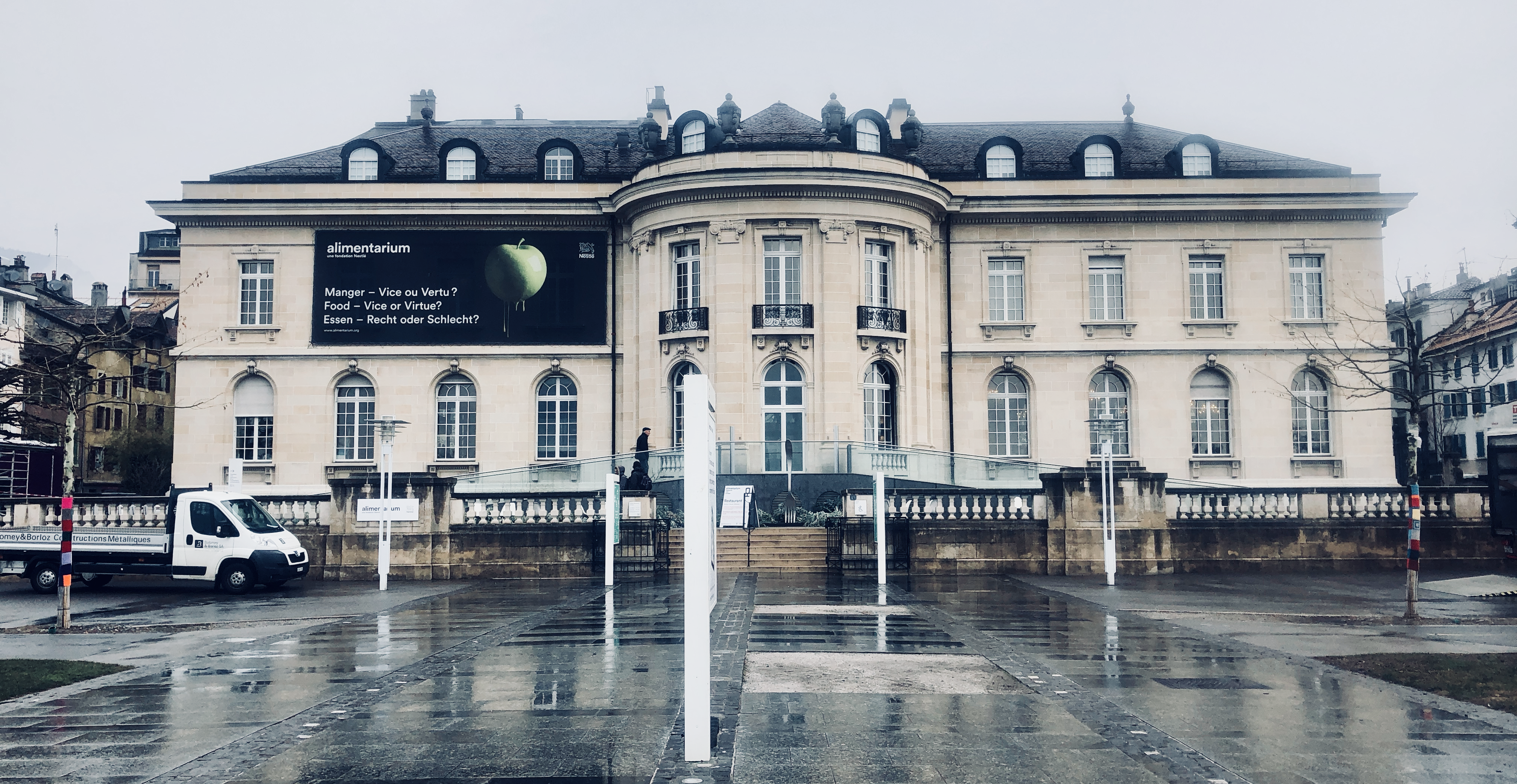 One of many Nestlé buildings along the lake.

It’s time to drop some layers. It is raining but the weather is just right for hiking in the Lavaux. In summer this would be hard to recommend. There is no shade in the vineyards but in order to walk from Montreux westwards you are forced to do it. The Lavaux it self is incredible. Vine is grown here since roman times. Everything looks medieval. Because of the rainy weather there is nobody around. This may well change in summer times, given the number of trash bins along the way. Although it is raining a lot I walk in shorts and towards the evening I test out newly acquired rain pants from inov-8. At just 86 grams they are incredibly light. 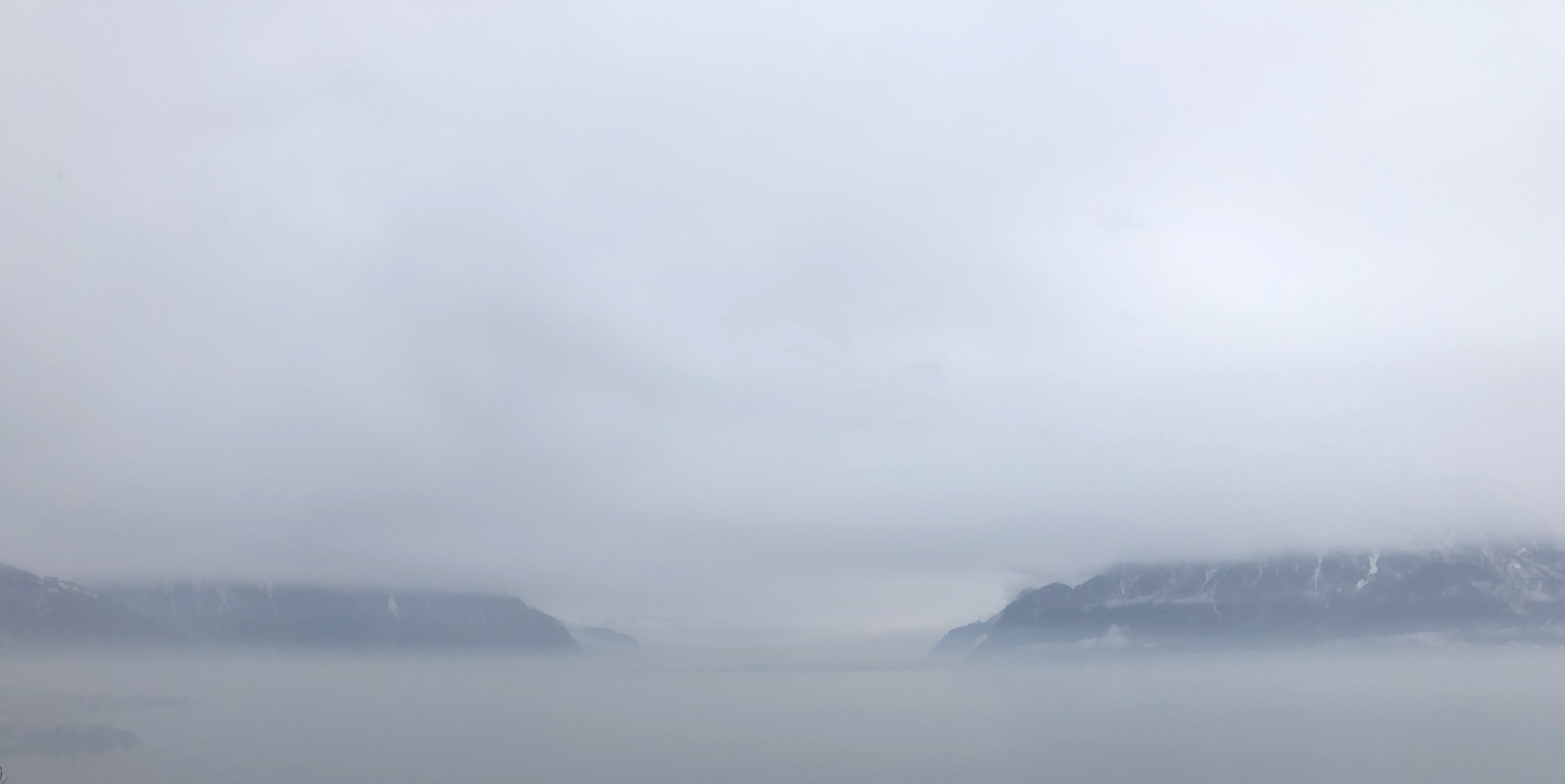 Between the mountains is the beginning of the Valais. Thats where they can’t tell a Fox from a Wolf…

So far Lake Geneva is by far the most beautiful lake I walked along in Switzerland. The landscape is magnificent, the towns are pretty. On lake Constance you can walk along the shores for not even one mile, the entire rest is private and you are forced to admire the back side of all the ugly houses.

On this lake you can walk along for hours or they guide you through nice landscapes. Sometimes the shoreline stretches out so far that not every inch of the land is in use as a picknick place in summer. There are few imposing houses so far and the main roads are bearable in the distance.

Headquarters of Nestlé can be found in Vevey. If you like non-organic industrial food you may have heard from them. If you are just a little bit interested in the ugly side of global food you may even know them better. They have a huge water business which not everybody admires.

At the moment however they put some solar on their hq building, rerouting the trail, which distracts me so I take a wrong way. But I can see their canteen from the road. I wonder what they cook in there. Frozen pizza?

In Lausanne there is  the Olympic museum. Also something not everybody admires. In Switzerland they are trying to built up a new candidature for Olympic games. They tried it in the Grisons and were forced to abandon the plans because of a poll. Now they try to dodge a poll, something you shouldn’t do as a politician in Switzerland. They claim timing reasons, something that weakens their position further. If you can’t foreseen a poll in Switzerland for a project of this size you shouldn’t even think about organizing something of this magnitude. I think they will not stand a change. In Switzerland, people on city level sometimes like to vote about the reconfiguration of a single park or a volume of less than 20 millions.

The yacht harbors grow bigger towards Geneva, so do the sailboats. Several older Beneteaus spend the winter in the water, I think the newer ones were lifted out in fall.

It is called La liberte.

In Morges they have a huge sailboat, or more precise, a galley in the water. I later learn that it originated as a project for the unemployed. Guess what, I could imagine worse things to do than working around this ship.

It is towed far outside to keep away curious swimmers. And it is not far away from the scrapyard as well as it needs renovation and therefore somebody with deep pockets. If you have 600’000 somewhere and a vision what to do with the boat once it is renovated, they are happy to hear from you. By the way it is a historically correct replica of vessels that roamed the lake 400 years ago. 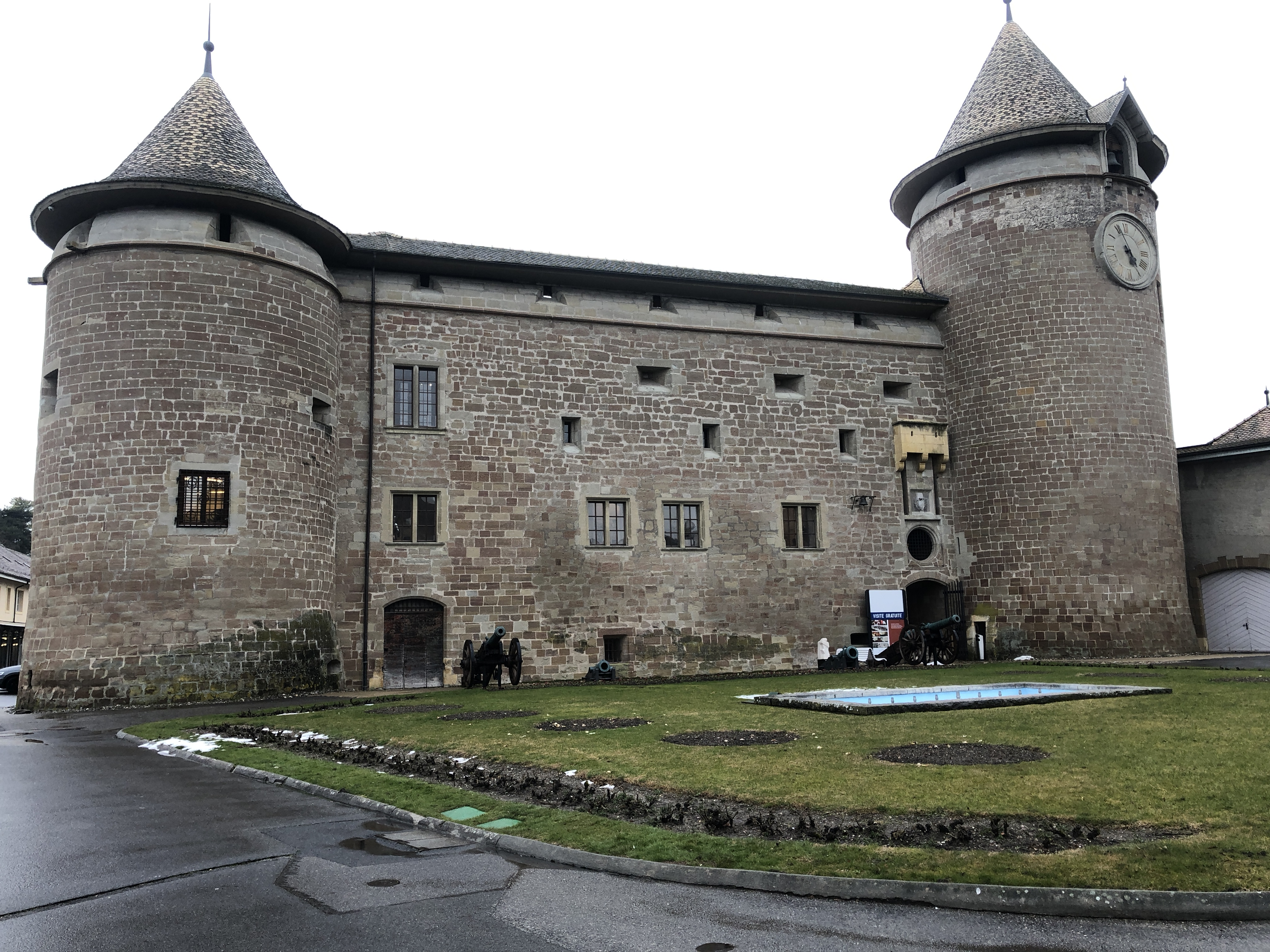 My kind of dwelling 🙂

After 10 hours of walking and covering some 30 miles of trail I hop on the train and return to Zurich. This trip has costed me nearly 100 francs. 15 more such trips and I am more or less out of money for good. 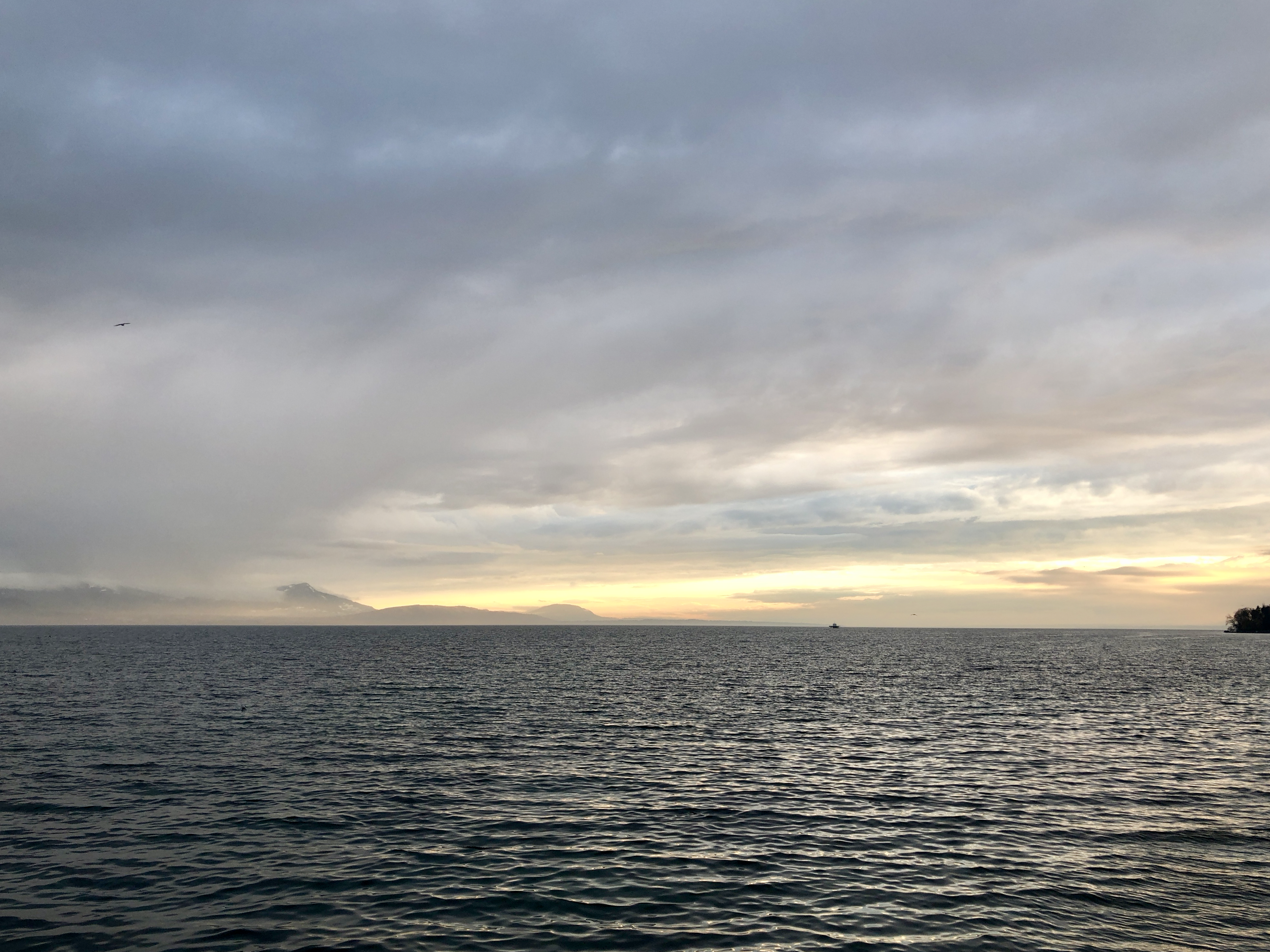 However, one break I had to do today was to call back somebody who has maybe a job for me. This would not be the badest thing in the world. I managed to pay all my taxes but I have to pay again my health insurance and so on.

Calling back wasn’t even that easy. On the lake there were waves but my headphones handled it well. And I was really happy about this call since she even took the time to read my CV. Something extremely rare nowadays.