The weather forecast looks amazing. New shoes are in the mail. My bank account allows it. Why stay at home?

There is just a little piece of trail I need to complete in the southern part of Switzerland. I know this trail since I have done it in the past more than once in sections. Today I will do all of it in one serving. There is however a catch: At this time of the year, there is no boat service crossing the lake in Morcote. I have to swim through the lake or go around with public transport. Which takes more than one and half hour. We will see.

This is an ordinary working day in Switzerland, so no trash-trails on my way to central station. No problems whatsoever during the two hours of train riding. There is even some brandnew high-quality content on the web: Backpackerradio Episode 5. It is hosted by Badger and Chaunce, they lift the level of thru-hiker podcasts by light-years. This episode is even somehow moving: It is about Shailee Basnet, she successfully climbed Mount Everest. More moving than Mount Everest is the side work she and her team have done since in supporting their communities in Nepal. If I had some spare cash I would for sure send it to them, prior than giving it to a shady western NGO with big offices & and huge fundraising costs in the western world.

In Lugano the sun is out, but it is March, so the sun has yet to heat up the landscape like it does in summer. Along the lake, road workers are busy on improving the parks. The temperatures are awesome. I get rid of my rain pants and my jacket before the climb up to Mount San Salvatore. If you do this on a warmer day, the San Salvatore is crowded like Niagara Falls since it has a cablecar up to the top. 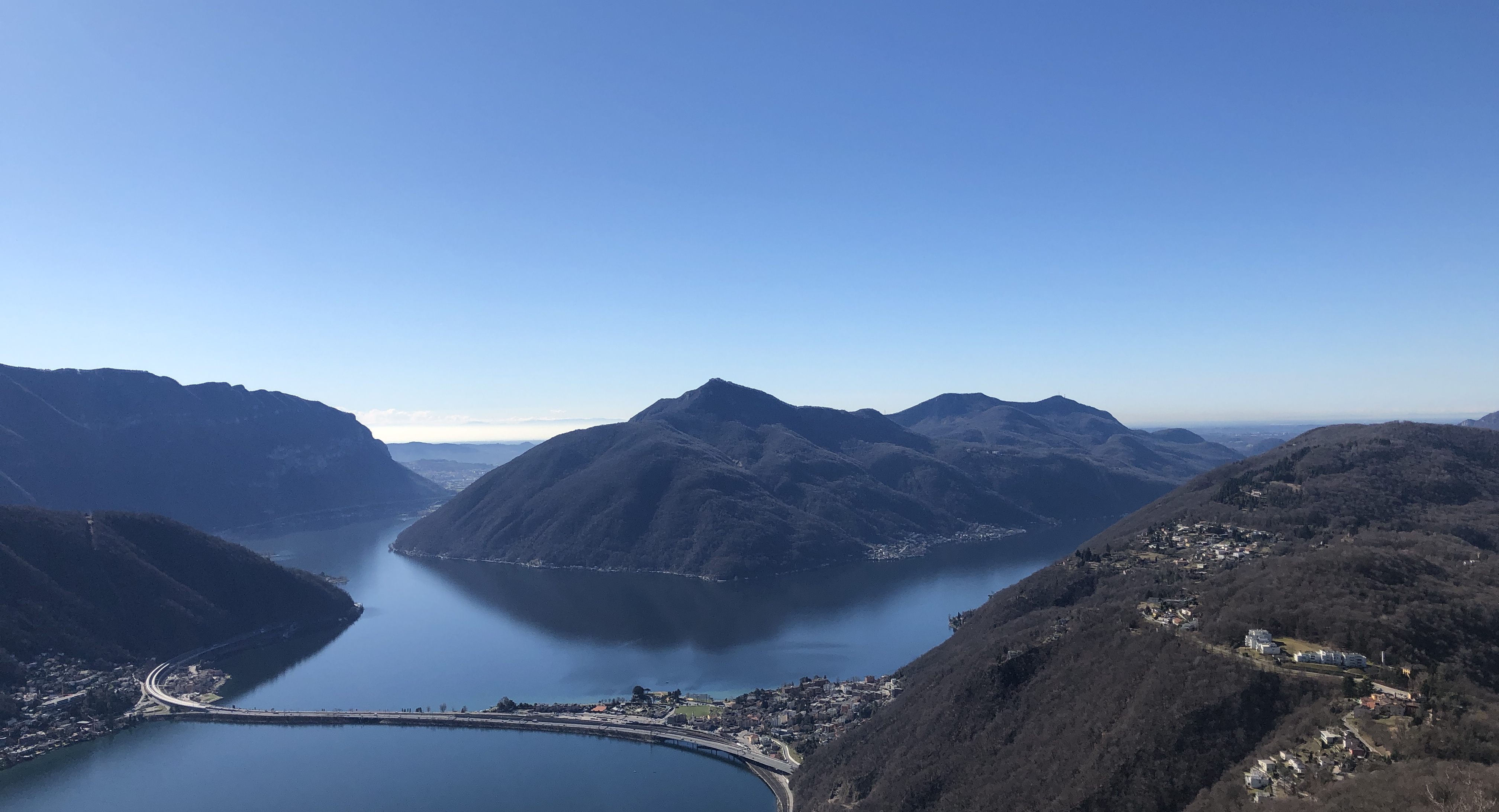 Had to climb the mountain in the middle

Not today. I encounter maybe three or four individuals on top. My climbability is back, I can take long steps from stone to stone again, for hours. The view is breathtaking. It rained last night, so the dust is kept at bay. The Mount Rosa massif is clearly the highest on the horizon. You need glacier gear to climb the Gornerhorn or the Dufourspike how it is called now, since in 1863 apparently renaming of mountains was possible, while we still wait on the renaming of the Aggasizhorn. Dufour was a general but also a co-founder of the Geneva Conventions and the ICRC. He died in 1875 but is still widely regarded as the most influential individual from Switzerland – at least if you don’t care about tennis.

If you follow this part of Lake Lugano , you come to Lake Como. This must be good, as Mr. Nespresso lives there!

I hike with a satisfying speed through the forests and take another way than the one I am used to. The new shoes are much more direct than the Hokas. You feel the ground, but they have also a protective layer against sharp pointed stones. A huge dog sits along the road, he does not move as I pass.

I have to get down to Morcote, along a fence. They have carefully repaired the fence since I was here last time. It is not so much against people but against boar and deer as there is a vineyard. Everybody here fences in their grapes. Most of the time it is done with the help of electric bands. At one place there is a hole in the fence and there is like a path leading there from the inside. This fence spans around a fortress. Since roman times there was always a fortress on this point.

Morcote from the other side

I reach Morcote before midday. In Lugano they estimated 5 hours for this section, I was again much faster than the time indicated on the signs. In Morcote I look out for a boat or maybe I could ask somebody to ferry me over the lake. All boats are still covered in their tarps, even removing such a tarp would take half an hour.

I decide to hike to Melide. The path to Melide must be hard to do in the heat of the summer. From Melide I take the train over the dam to the other side of the Lake. Where I switch to a bus. The bus belongs to the postbus company, they had a scheme going on to get too much money from the public. I arrive in Brusino Arsizio and even spot the house my ex-girlfriend and I jokingly wanted to buy. What we didn’t know then was that Brusino Arsizio had the biggest burglary rate in entire Switzerland (and there was no way we could afford the house anyways).

I am quickly out of Brusino, the height difference to the top of Mount San Giorgio is 800 m or 2600 ft. Doesn’t matter I am up really fast. I don’t have as much water as I would like to but on top there is a hut with an open door. On the inside there are cans of ice tea and Italian orangina. The hut was restored in 1975 for three years but shows deep cracks in the walls. Monte San Giorgio is a world heritage site because of the petrifications found here.

Monte San Salvatore in the middle of the lake

The bad weather has already reached the higher mountains; therefore, I go down towards Mendrisio before the sun sets. Somebody took really good care to the road leading down. It must have been cared for over centuries. They have amazingly set thousands of stones. 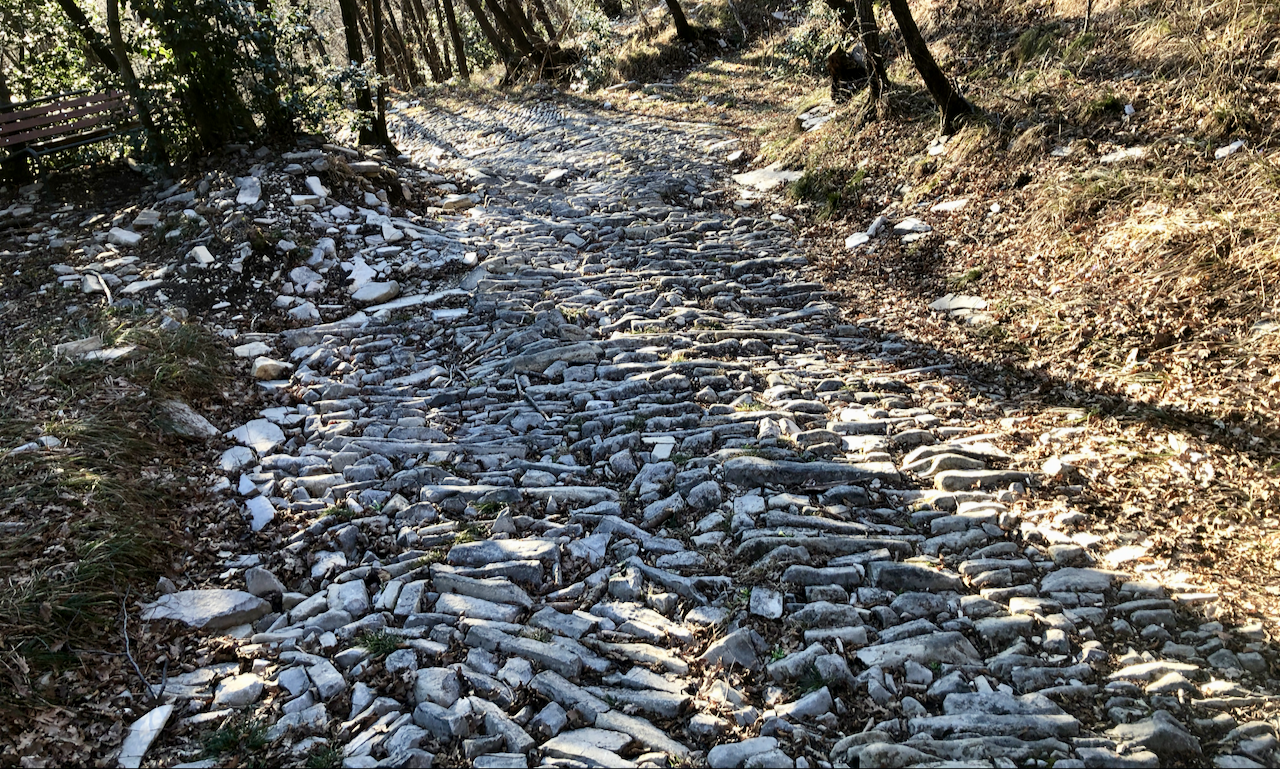