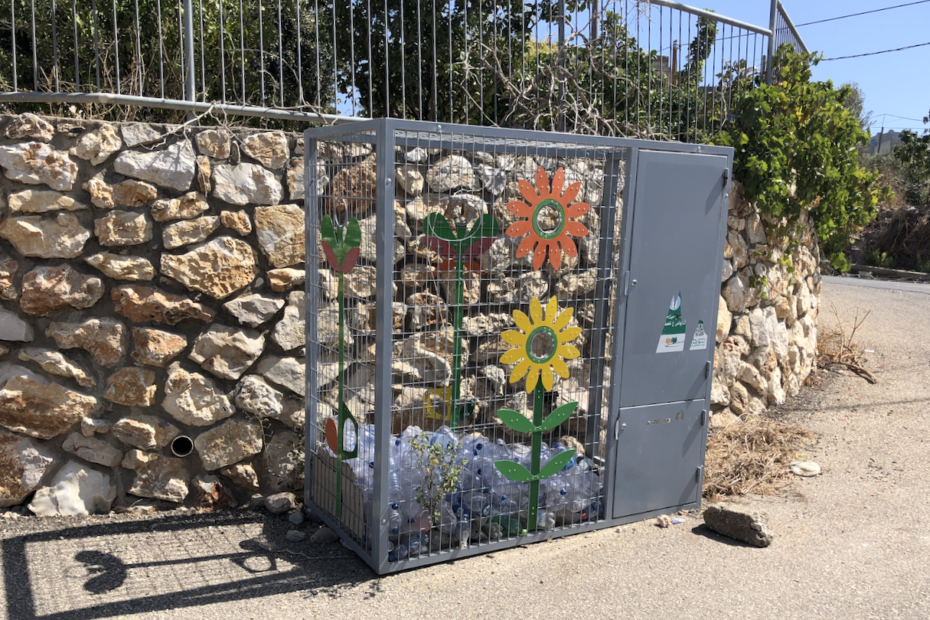 From Jerusalem I went to Arad. In total I walked more than 600 km (370 miles) through Israel but I didn’t venture into the Negev Desert. There you could walk additional 500 km.

Don’t get me wrong: Everybody was extremely nice to me, regardless of their situation. Whether they were orthodox Jews, Palestinians, Druze or Bedouins. Sadly, back in Switzerland, somebody who lives in Israel, explained to me, that currently the Bedouins are treated as the lowest in the hierarchy of the Israeli society. People warned me from the Bedouins but I didn’t experience some unfortunate situations at all.

The reason I didn’t like it was the trash and the heat. Actually the heat has some good effects on the trash. Everything that could stink gets dried out within minutes. If you walk through a cow pasture in Switzerland, there are always flies and odor. In Israel thankfully there is none of them.

But the trash. As northern Europeans sometimes we make fun of the Italians. Everybody went to Cinque Terre once and tells you stories about old freezers in the middle of the forest and the guardia forestale. When I was there, they even had a ceremony to honor the bravest men (I saw no women) of this elite environmental police force.

According to the speeches at this ceremony, they fight relentlessly and with big success against littering and unnecessary pollution. We ate at a restaurant, not even 2 miles away from the freezers in the forest. Also the brave men of the guardia forestale where taking a quick break from their duty. When we sat down, they were already there. When we left, they stayed. It rained and we stayed more than two hours. Sadly, compared to Israel even the south of Italy is well maintained and clean.

I remember visiting Capri, an island in the south. We were greeted by a huge power generator it was located in the middle of the town. Capri was a little bit dirty but they had all this international brands so you could buy your purses and reasonable fashion. Compared to Israel, Capri can serve as a model of a real clean piece of land.

As I was in the US before, where LNT on the trails is a religion and leaving your TP in nature can get you in serious troubles, Israel was really disgusting.

There is a freestanding mountain with now christian churches on top. Vans drove tourists up and down. As I later learned Mt Tabor is mentioned several times in holy books, during the centuries several epic battles for the control of this mountain, sometimes with thousands of soldiers, took place. Like nearly everything else in Israel today it is a pile of trash. I don’t understand why they are so rude to their incredibly significant places.

Sometimes they have simply so much ruins, dating back to roman times, that nobody gives a damn anymore. Roman aqueducts, medieval castles and so on.

At least others are well cared for. Tel Arad is a National Park where close to six millenniums of history are celebrated.

Much bigger than Tel Arad is Caesarea Maritima. More than two millenniums of history can be found here. The history of the place is interlinked with some jewish and biblical history. From the trail some ruins of a crusader fort can be seen. The place is a must for every person interested in history. For LD-hikers like me, there was just a gas station nearby where I got my coke and protein drinks, gearing up for dozens of miles along a sandy beach.

Downtown Tel Aviv is cleaner. They have even cleaning machines from a company called Bucher, made in Switzerland.

Between Tel Aviv and Jerusalem a lot of remembrance sites are located along the trail. For Anne Frank and for Simon Wiesenthal just to name a few. The stone for Simon Wiesenthal is newer, I tried to get rid of the brushes in front of it. Next time I will carry some garden scissors. I think this sites are really important but they should be in Germany and not hidden away in a valley deep in a forest in Israel. While walking back to the trail in Jerusalem I came across a just mildly dirty park created for Raoul Wallenberg. He saved thousands of Jews during the war but vanished just after it in the Sowjetunion.

Just two hours outside of Jerusalem the most spectacular landscape outside the dessert along the INT can be found. Just don’t look to your left when moving SOBO, as you would see the biggest remembrance site for a modern tragedy surrounding Israel. There is a giant wall, with ugly barbed wire on top. You follow this wall for quite some time.

As I wrote earlier, neither the Israeli army nor their Palestinian adversaries will get a price for exemplary conduct along the lines of the Geneva conventions anytime soon.

Earlier in my life I was part of a group who tried to help both sides with so called “non-violent direct actions”. Sometimes we could ease the plight of Palestinians by talking with Israeli soldiers who admitted openly that their checkpoints are just a method to harass the civilian population. Militants don’t showed up at these checkpoints. We also helped to prevent at least one attack on Israeli targets or even civilians by tipping off the authorities about somebody, so they could arrest him in time.

Once I spoke with a father who just got the message that his son was part of a group who blew itself up in Tel Aviv, trying to murder as many Israeli civilians as possible. He told us the history of his son. Apparently his son saved money over years to get his own car. When he could finally afford it, the Israeli military send in a tank who crushed it in the first night. The father didn’t believe in coincidence. Such things can never excuse a horrible bombing but I can feel the desperation surrounding such cruel acts.

After the most spectacular landscape one arrives at the grossest camping spot I saw on my trip. At first sight incredibly beautiful. A historic site with a natural water source, there are trees and so on. I had the entire camping place for myself. Carefully I tried to place my tent as far away from the road as possible. In the forest everything was full of white blooms. Because it rained, the stuff was smelly.

The only solution to the problem of white blooms I can think of, would be to use water instead of TP to clean yourself after going number two. In Israel the ground often is like concrete. Either it is rocky or it is incredibly dry.

I felt really depressed afterwards. Sometimes in Israel you think about how much you are willing to take. Soon afterwards I moved back to Tel Aviv and rescheduled my flight. At this stage of my hike it became apparent, that it is impossible to do night-hiking in the dessert. There are Rangers who stop you. As a guest somewhere I always try to not break rules and regulations.

All in all I am saddened by this experience. Israel spends billions every year for security purposes. Cleaning the landscape is free compared to the costs of the wall but it would make a huge difference. It is even an ideal occasion to bring people from different backgrounds together. Today we clean our trash, tomorrow yours.

There are already such initiatives and even organizations who put adversaries and victims together at one table. Most of them remain friends of each other for life. Sadly, at the moment Israeli politics are in turmoil and angry town leaders threaten to strike. This would also affect the waste disposal.