The weather isn’t great. Actually it is miserable. It rains only once. I don’t care. I stay warm and cozy – thanks to not so cheap running gear. From the head to the toes. The jacket is from Gore Running wear, it shines in a nice silver. Fit isn’t so great. But it is waterproof and with my underwear I don’t sweat. Plus: My phone fits in the pocket.

At 5 o’clock in the morning I take the train to Schaffhausen, a small city near the border to Germany. I walked from my hometown Zurich to Schaffhausen some days ago and I have been in Schaffhausen before. This helped me to find the way to the train station and now it helps me to find the way to the river Rhine. I will follow the Rhine the entire day. Not towards the Netherlands, but towards its source in the alps. The source of the Rhine I once visited with my girlfriend, my sister and her husband. It is just 30 minutes away from a road.

It’s still dark and night when I arrive in Schaffhausen at six o’clock. In the shop, I get a Redbull and a cold coffee from an industrial company. There are no shops open 24 hours in Switzerland and there is no responsible coffee. It is the same older lady in the shop as some days ago. I believe she is happy to have this job. We wish each other a nice day and we do the entire procedure of saluting – in Zurich nobody does this in this kind of shops. Schaffhausen is around 10 % cheaper in living costs than Zurich. Maybe that’s why the people are 20 % more friendly.

The police drive in circles around me. I am the only person in this part of the city. All other train passengers sit on their desks by now. I don’t feel threatened. Like in the US, being white is an advantage. Being dressed like I am is also a huge advantage in Switzerland. They finally realize, that I mean business with walking, when I leave the town. There is nothing great any more in this direction to safeguard for them. And I am leaving their area of responsibility soon.

If you want to become an officer in Switzerland, first of all you have to learn another trade – plumber, gardener, whatever. If you apply for police school, you have to pass a series of tests. You need to be healthy both mentally and physically. You need to pass a German test when in the German part of Switzerland – in your career as an officer, you will have to write a lot and it helps, if you are able to express yourself in written form.

Most applicants fail with this test. You learn how to use your gun. And you train it. Be prepared to undergo an investigation every time you squeeze the trigger in anger. It is simply mandatory – every time an officer opens up, there is an investigation. Police school takes you four years and afterwards you spend additional years in a buddy system, given only light tasks in the beginning. It isn’t cheap to have such a police force.

John Oliver did a brilliant piece about the problems of the forces in the US. Here in Switzerland no officer can change to another local force if caught in acts of misconduct. They get hired by private security companies. No more permit to carry a gun – the same circle through the city every night.

However, in Switzerland they use still rubber bullets for crowd control. In London even the police union is against it. They had it in Northern Ireland and the results were not encouraging. It was ineffective but caused severe injuries and people died. The German police uses more advanced tactics. Instead of shooting you with rubber bullets they come close to you and simply arrest you, if they feel this would improve the situation.

Meanwhile I walk into the German enclave of Büsingen. They are complete encircled by Swiss territory. And it is not easy form them. They try to become a part of Switzerland since the 18th century. There were several attempts to swap land between Germany and Switzerland. So far no one was successful. They theoretically use the Euro currency but it is not in their favor. The town is poor. In Switzerland smashed windows are a rare sight. In Büsingen I spot several windows repaired with plastic foil on the main street. I continue on the northern side of the Rhine. Maybe the other side would be nicer but I don’t care.

Since the start of the walk in Schaffhausen I wear my new rain pants. They are also not cheap. I will wear them only in emergency situations in storms or when walking through snow. So far they are really comfy. I don’t sweat in them.

Soon after Büsingen the path goes into the forest. I drink my Redbull and my coffee. When I’m not on caffeine for more than 20 hours, I get headache. I don’t want headache now.

There is a sign remembering different armies that passed and crossed the Rhine here: The French, Russian and so on. They came by in the 17th century. It was hard for the local population because the 10’000 of men all wanted to eat and needed a lot of wood to keep warm.

The forest is nothing to write about. But I see a lot of small cabins. In the summer time it must be nice out here. Now everything is in winter mode. I see a lot of wild boar traces near the path. Unfortunately I don’t see the actual boars. A young fox disappears in a corn field. And I see impressive German shepherds. The weather is still grey. I don’t see many people. I give everybody the Swiss German salute from Zurich – which goes like this: “Grüezi”. Now the third letter of Grüezi doesn’t even exist in English. And the pronunciation in Swiss German is extremely difficult to achieve even for German speaking people. A person used to speak Swiss German can easily detect somebody from Germany by the way the say “Grüezi”. It is a short form for “salute god” in German.

In Hemishofen I cross the Rhine. Everything is private on the other side. You see the Rhine only in the distance. Somebody recharges his Tesla car. I cross Stein am Rhein. It is a nice old town but I don’t care. A sign on the side of the Rhine reads “Grenzbrigade 6 – die Wacht am Rhein” Something like “Borderbrigade 6, the guard on the Rhine” and it should remember all who pass by for the time during the second world war. However the Swiss army was always joke. Switzerland wasn’t invaded during the war because we did what we did and do best in all the times: We did important business for the Nazis and our arms manufacturing industries were in full swing. The art museum in Zurich got a massive cash injection by the biggest arms dealer Switzerland has ever seen. He managed to resale all the guns he had already sold to the Nazis to some African warlords. Because the war ended the Nazis were no longer interested in those weapons – nobody answered the phone anymore. 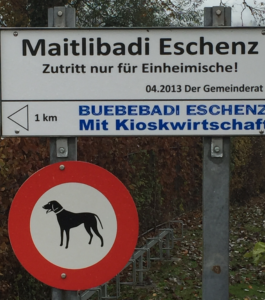 Shortly after I pass the town of Eschenz. It is inhabited since the stone age. They dug out things from 2000 BC. The Romans were also there. They had a wine business going on. Then I see an extremely rude sign: “Only for locals” on one of the few public beaches on the Rhine. What a contrast. Luckily “local” is no legal definition. However I don’t feel extremely local anymore. The sign says “girls bath”, the boys are one km down the stream and they have a restaurant. It would be interesting to know if the segregation is still enforced. And don’t forget: gender is a social construct.

I follow the marked hiking path. Dogs howl in the forest. The hunters have to shoot boars. I pass a ruin from medieval times. Lots of apple farms.

In Steckborn I come by the Bernina plant – in school I learned to handle a sewing machine with a Bernina. It was a mandatory class. They changed it then only a short while ago: Boys and Girls started to have the same curriculum – so the boys had to learn how to sew, the girls how to work with wood.

In Salenstein there are some well-known castles. One belongs to somebody who is still alive but suffers from dementia. The other one is up for sale: His owner got bankrupt and was convicted of fraud. Both castles are hundreds of years old.

After the town of Ebmatingen I come by a real fat Bunker. It was part of the barrier of Kreuzlingen and built before the second world war. It is a joke. The Germans took over the Maginot line in France within days. However the Bunker was still in service until 1995. By this time the Germans could launch a bunker breaking missile. The poor soldiers would have sit in this Bunker like in a shop window or like a Moose in all this horrible hunting movies – except that they would not have been able to flee anywhere.

I pass several nature parks. Some of national and international relevance. A lot of birds pause here on their way to the south. Some may come from Scandinavia on their way to Africa in fall.

Before Kreuzlingen I pass another castle in Gottlieben. It was built in 1251. In 1415 a certain Mr Hus from the now Czech republic was held in this castle – he was later burned to death in Konstanz. This castle is also in private Hands. An opera singer bought it in 1950. It seems she was a nice person as she ended her career in 1974 to be there for her daughter who was ill. She died in 2012, her husband in 2014. The daughter still lives on the property. Such castles are money pits. As they are under federal protection you can’t drive in one single nail and every building work has to be agreed on by the local authorities. And they don’t like to see cheap building materials as everything should last for the next centuries or so.

From Gottlieben to Kreuzlingen the rain gets substantial. I don’t put on my rain trousers again. My not so cheap trouser/tights do the work. In Kreuzlingen on the train station I meet the police again. A mixed patrol: German police combined with forces from Switzerland – regular and border guards. Nobody bothers me or other white persons. All the black ones have to show their passports. Some of them two times within five minutes.

Do I feel safer now? No I don’t. But I am happy never the less: Next time I will walk along the Lake Constance and I will come into the area of the border where a certain Mr Grüninger worked as a police officer in the years 1938 and 1939.