My shins were not so happy after the first full marathon on the first of the year 2018. They still need to recover from my horrible snow shoe experience. On 800 meters above sea level there was still too much snow.

It was scary anyways and I decided to not test my luck another time. Mont Tendre, the next big hill on the Jura Crest trail is 1600 meters. So, I spontaneously decide to do something on lower altitudes. Switzerland Mobility at the moment shows you a lot of winter stuff. However, I am not interested in goofy snow shoe tracks. I try to crush miles, even in winter.

I decide to start another longer route: The Trans Swiss Trail. It starts again in the Jura and ends in Mendrisio. In the morning I get up at 4 and do a three hours train ride. It is still dark as I arrive in Porrentruy (French) or Pruntrut (German). It is a small city that dates back to roman times. Today it has less than 7000 inhabitants. In modern history it is noted publicly for the first time in the year 1136.

As I try to navigate from the railway station to the center of the town I come across some gravestones with Hebrew writing on it. Google later knows that they are not gravestones but the last reminders of a Jewish synagogue. The Jewish congregation in the town does no longer exist. Most Jews simply went to live somewhere else. Some died however in the holocaust during the WWII. They were not deported from Porrentruy but were sadly surprised by the nazis elsewhere, mostly in France.

There are blowdowns, but they have already started to range the wood. A dog comes barking at me. Poles in one hand, spray in the other hand, I yell at him. He tries to attack me from behind. Like a matador I lift the poles in a clear movement. He understands and decides to go back to his owner. His owner lets him from the leash not even two minutes later. He comes back, angrier than before. I spray, he sneezes. I yell at his owner.

She wears an iconic cap from the year 1977. It looks like new, as the sun doesn’t shine here too often. Everything is covered in fog. She pretends to speak only French, I decide to speak only German. She gives me names from an anatomic book. I salute her with a certain finger. She replies in high German. I tell her to take her dog to the leash. So, her cap is not old but from e-Bay and she is a hipster. The kind who asks me, if we have dried our dates at more than 42 degrees celsius as she would like to eat raw vegan stuff only. It was probably warmer in Tunisia where the dates grew but who cares.

My next goal is the river Doubs. In my dreams I imagined a quite river, gentle even in winters time. I even thought that the way along the river should allow for fast hiking. There is just one problem. It is wet. There was a rapid snow melt. So, the Doubs is at least 1 m to high. Everything is flooded. 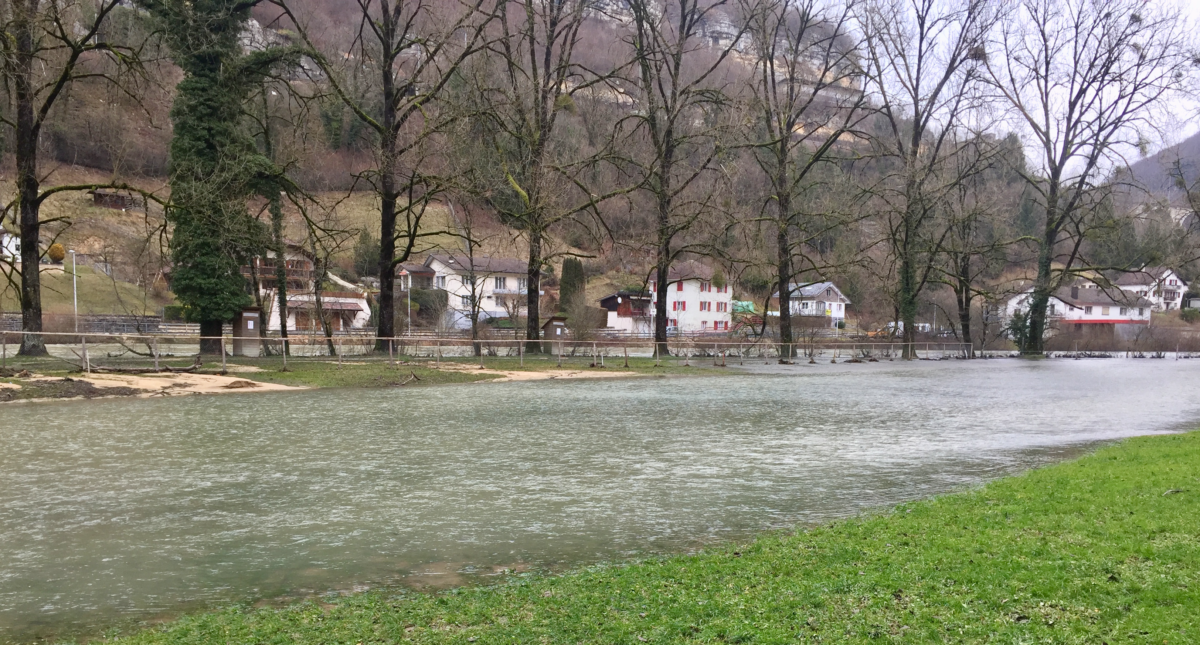 The trail is where these trees are…

I meet the Doubs in St. Ursane, a historical city with less than 700 inhabitants today. They are redoing parts of the City and are asking for donations. It will cost them more than 7 million and you can buy property in the town for less than 50 francs per square meter of developed land. In Zurich it would cost you more than 2700 just for the land. 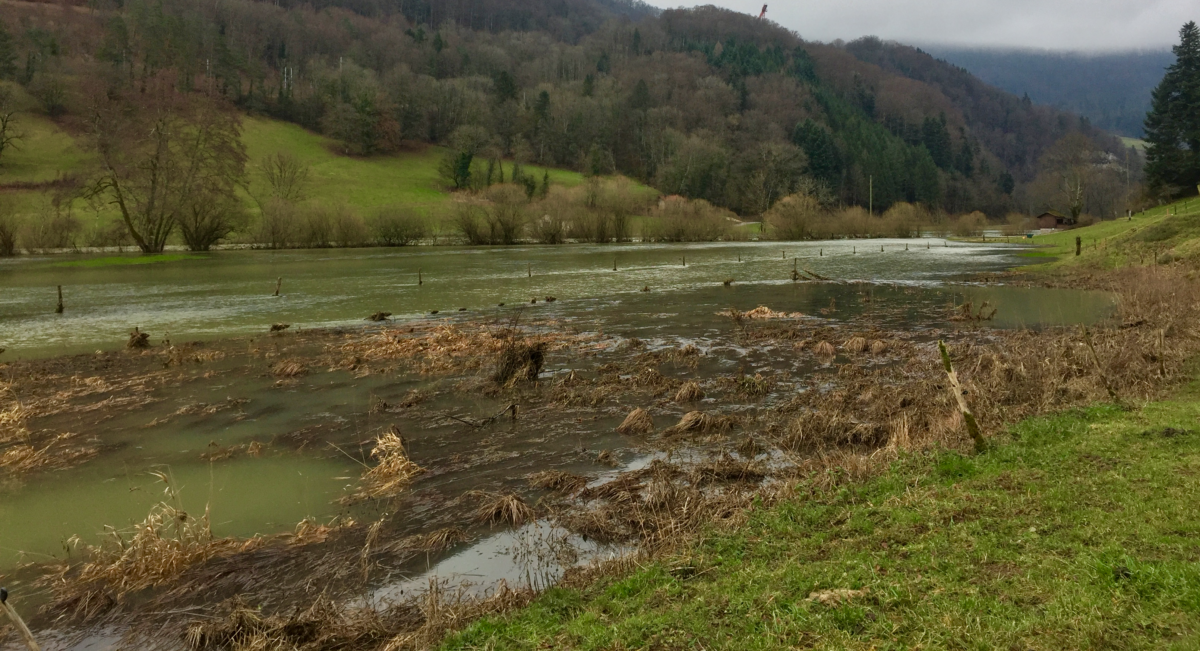 The beauty of today’s software is that you are able to enhance the colors in pictures. Otherwise it would look like reality which would be depressive.

The river went in the houses and they are cleaning them as I pass by. This can’t be true. Of course, the way along the river is inside the river for now. The river has even come over a solid road. It can end up being interesting. There’s no way I would put one foot in the river. In the middle the water flows fast and there’s no way you could stand or walk in there. I don’t know if the river will flow through canyons and if there will be rock faces. Let’s find out. 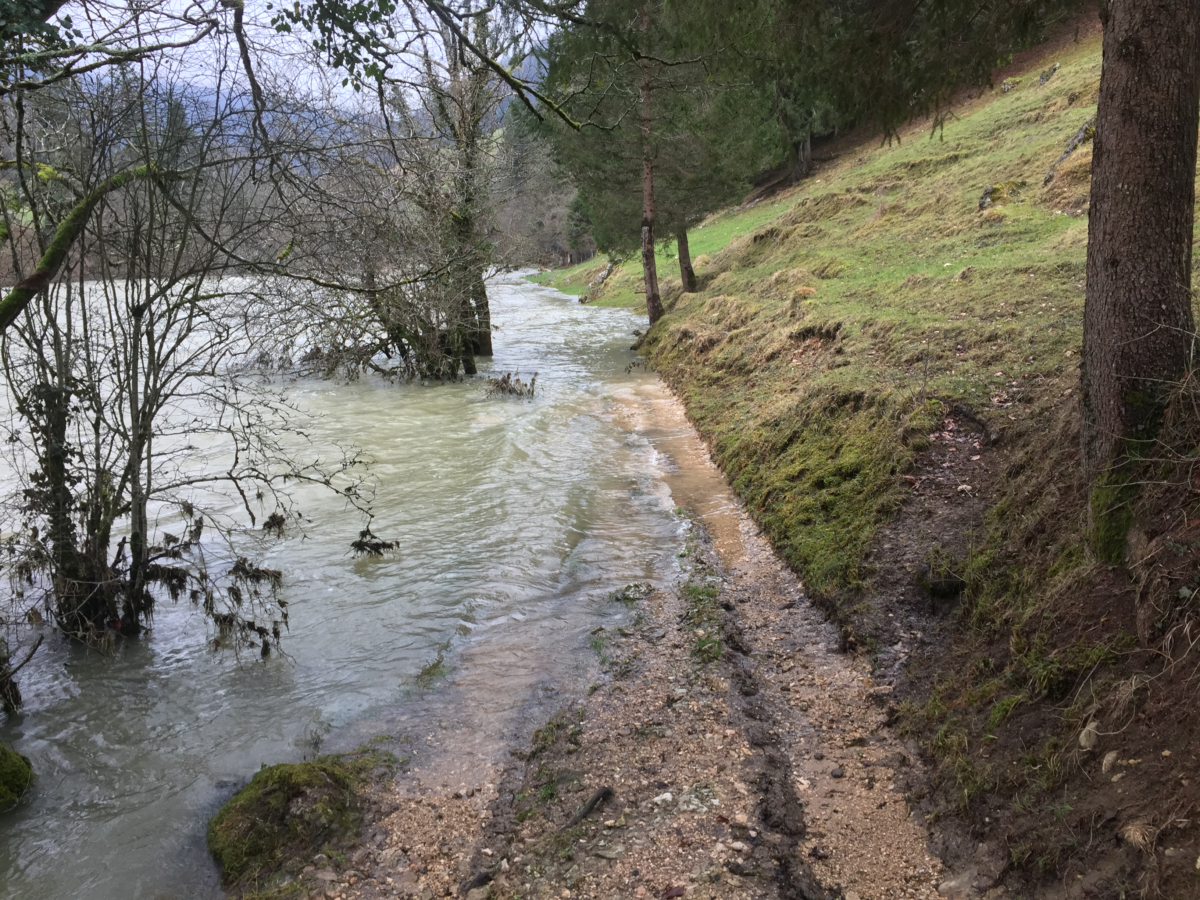 Bushwhacking starts right in the forest…

There is a lot of fresh boar activity going on. Sometimes I have a feeling like I was chasing the boars. They for sure are watching me. There is just nobody around and there is not much going on here. Every piece of land that isn’t forest is a cow patch. Or flooded at the moment. I have to do bushwhacking for hours. Thankfully the river flows along a rock face just once, forcing me to do a massive detour. 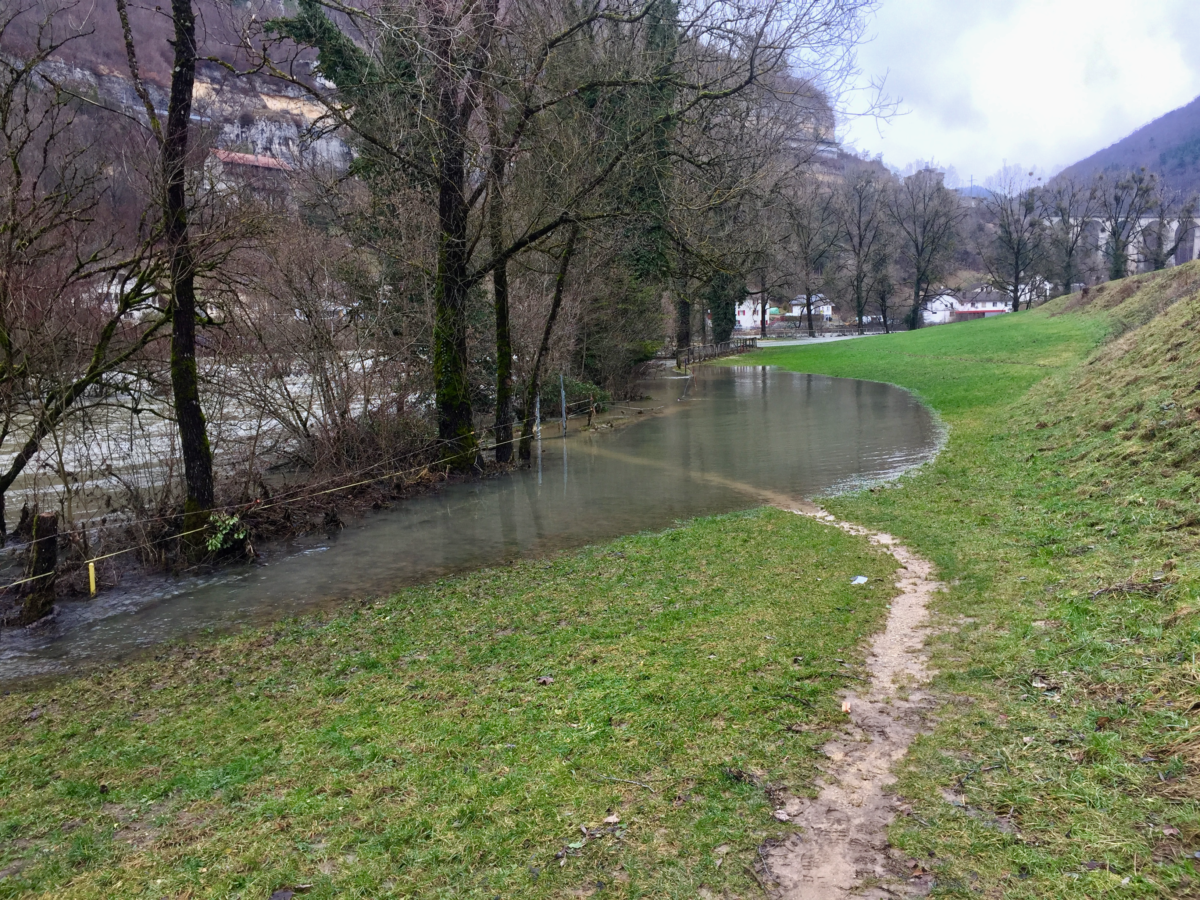 As everything is flooded, side rivers went also out of their banks. Doesn’t matter I can clean my muddy shoes by just walking on forest roads. After 5 minutes or so the water usually disappears, and your feet are warm again.

Unfortunately, the battery of my phone is not happy about my ways I used it. I had this phone for three years now and the battery needs to be replaced. So, I can’t constantly monitor where I am. For once I am lucky and I find out about a bridge over the river just in time to crawl down to the river. The bridge stands in the middle of the river. I have to walk into the river on one side, cross the bridge and then walk out of the river on the other side.

Thankfully I do not sink in. For once I applaud the farmers who did compress the soil over the last 60 years. On the higher parts of my route there is a lot of wind from the east. Thank you Arc’teryx designers for releasing all this fancy wind stopper gear (and thank you parents for providing the funds to buy it).

The map does not look promising as the trail follows the river in canyons and it is getting dark. Last time there was like a snow closure, now there is a water closing. I decide to do more than 2000 ft in height to reach Saignelégier. Again I have to cross a plateau where dogs are barking and the barking comes closer but it is fogy and the wind blows in my direction. The dogs lose my tracks.

In more than 10 hours I did just 26 miles. And I couldn’t enjoy it. Most of it was just stupid bush whacking. But I’ll be back. However as next I have to climb up to Mont Soleil on this trail, that would be again 1200 m. But apparently the snow is hard, and the Mont Soleil is a touristy spot.

And I will hopefully have a newer phone, better legs and the sun will shine and so on…