Panic stroked me. The meteorologist on TV explained how to create an ice-lantern and they were warning from incoming much colder weather. I usually wore my warmer gloves on the way to work but they don’t warm my hands enough. I felt the necessity to get warmer gloves.

My financial horizon turned from being black to dark grey, so I could afford some. They are equipped with Gore-Tex and Pertex. As usual, made in China and with sheep skin. I feel like a lobster when wearing them. They are rated from -1 to -30 degrees Celsius. 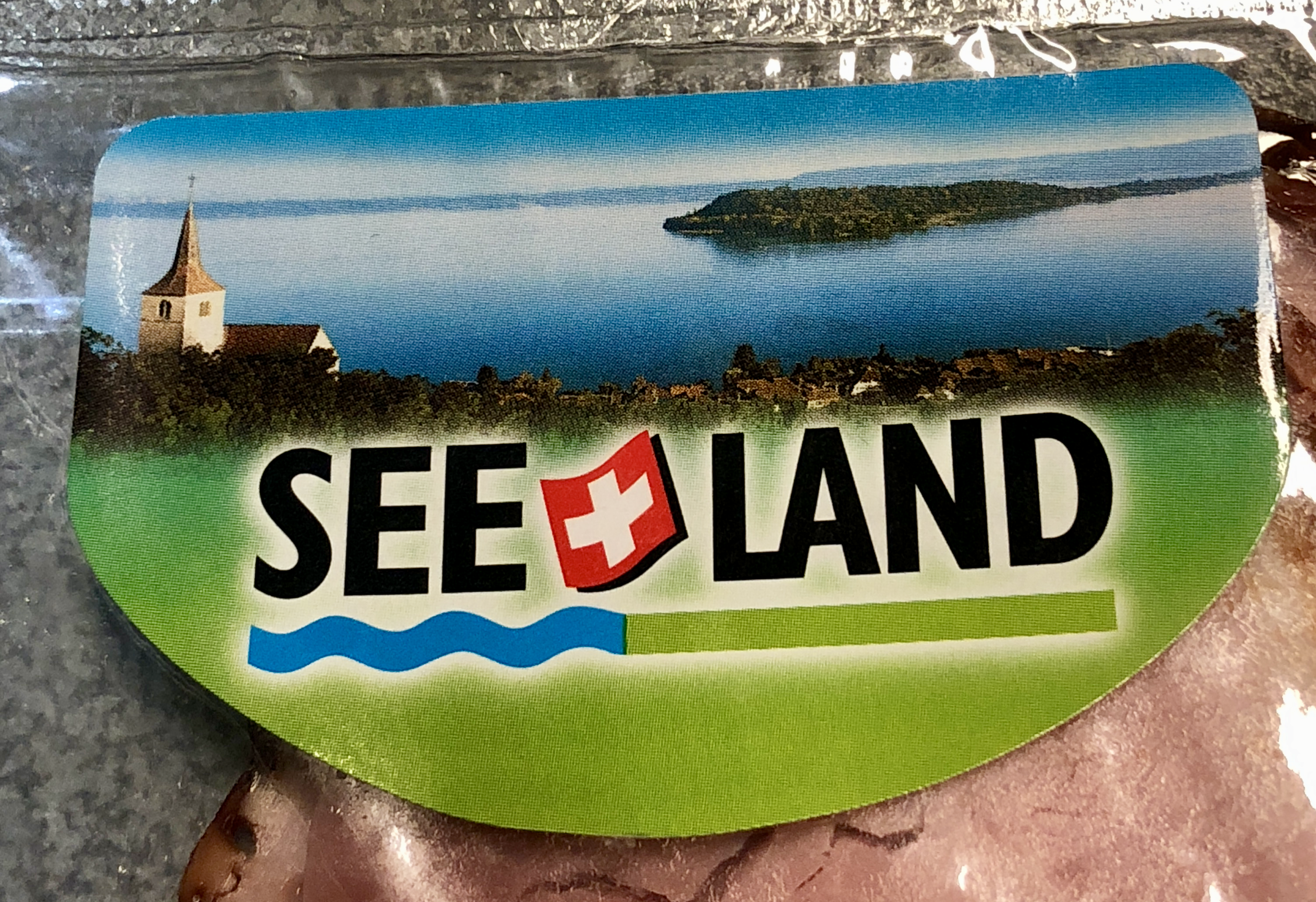 Where I am going today. Although I didn’t pass this lake, as it is lake Biel. And this meat has no organic label at all. Don’t buy it.

As usual I climb out of my bed at 4 in the morning and hike to the train station. Drunken youngsters everywhere, the McDonalds being the hotspots. The McDonalds near the main railway station leaves a trash trail deep into the station. Some people must have an extremely boring life. What exactly is the fascination of going out and littering the streets?

I have to change the train several times. For the last part I have to take a bus. They provide this bus for me only. Nobody else wants to travel from Avenches to Cudrefin before 8 this morning. The bus driver does an excellent job, showing me even a Nespresso plant. You know, the coffee no coffee farmer can afford. Made in Switzerland, it must be excellent. George C. appears in the ads. It must be the best coffee available. A supply chain my neighbors here must like: We cash in, others do the dirty work. I suggest you drink RebelDia coffee instead. For the daily uprising.

Neuchâtel seen from the other side of the lake. Did cross the white mountains in the back some weeks ago.

From Cudrefin you can see Neuchâtel on the other side of the lake. They suggest taking a boat to cross it. Swimming it in January I would only suggest if you did a successful formation as a fighting swimmer like the Germans have it in their army. And good equipment. I have to cross a trailer park. It is, as I found out later, part of the town and at the moment it is like abandoned. I know abandoned camping places with their permanent installed trailers as I cross through them all the times. Still it looks scary and they have 16 pages of rules just for the place. It is not a place for the poor as they have a lot of rules aiming at living cheap.

I sneak through the forest, there is boar activity all over. Boar activity like I have never seen before. There is water in the fields and the boars like it. Soon I climb up Mont Vully.

Mr Agassiz was born somewhere here. He was a scientist but is remembered today as racist idiot. Still there is a peak named after him and they don’t seem to care a lot around here. Sometimes I wish I would be possible to take a grinder on my hikes, but I don’t know why this idea came up right now. 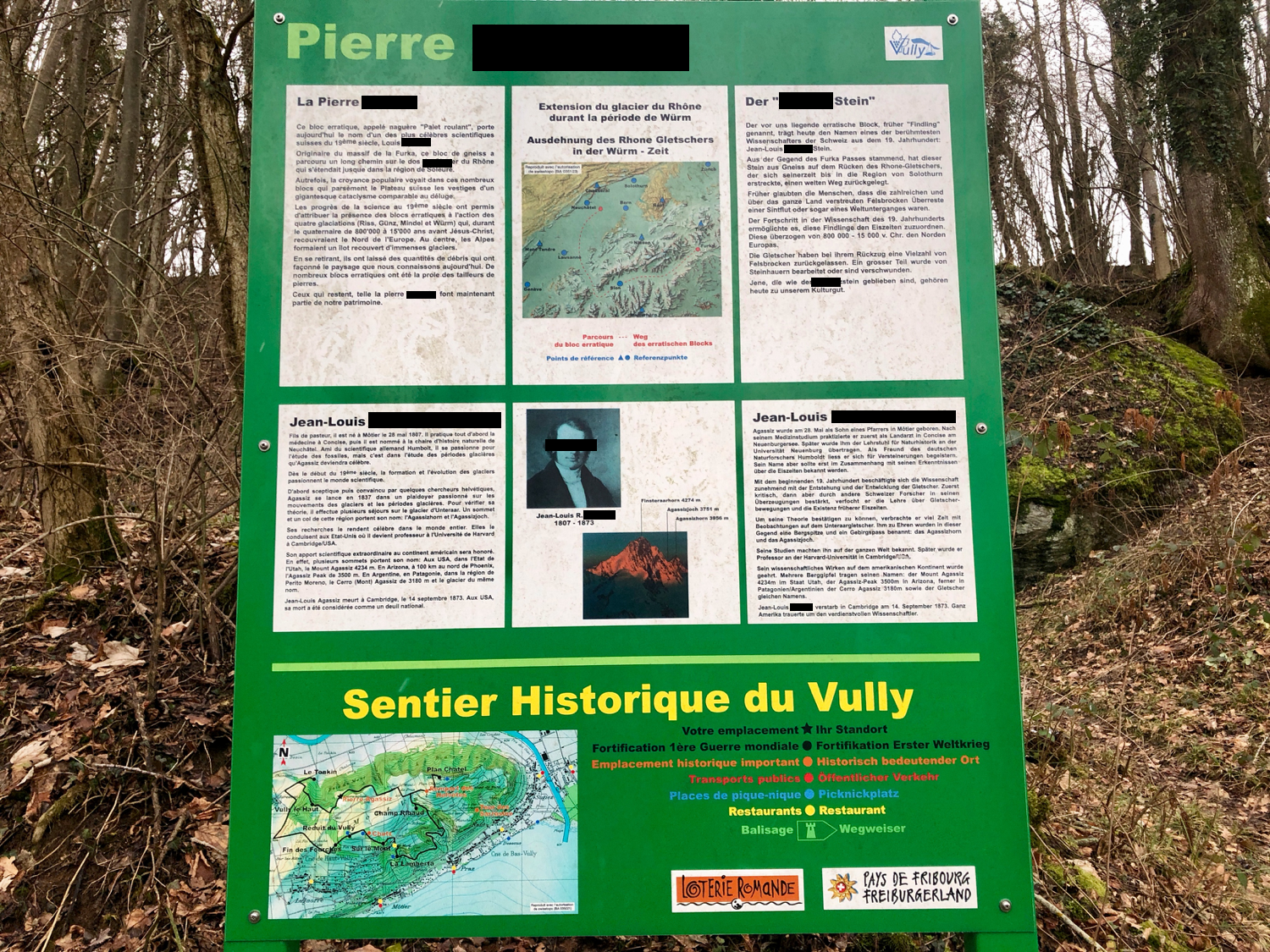 Morons don’t need to be remembered.

Lots of deer and foxes, dog owners are out but all the dogs I see behave friendly. They have even reconstructed part of an old fortification on top of Mount Vully, dating back some 2000 years. The army has constructed fortifications on this hill during the first and the second world war.

A campervan shows up, it is one of these go anywhere campers, designed to drive through rivers. Using it for his purpose is illegal in Switzerland. You can drive around in a gravel pit but that’s it. 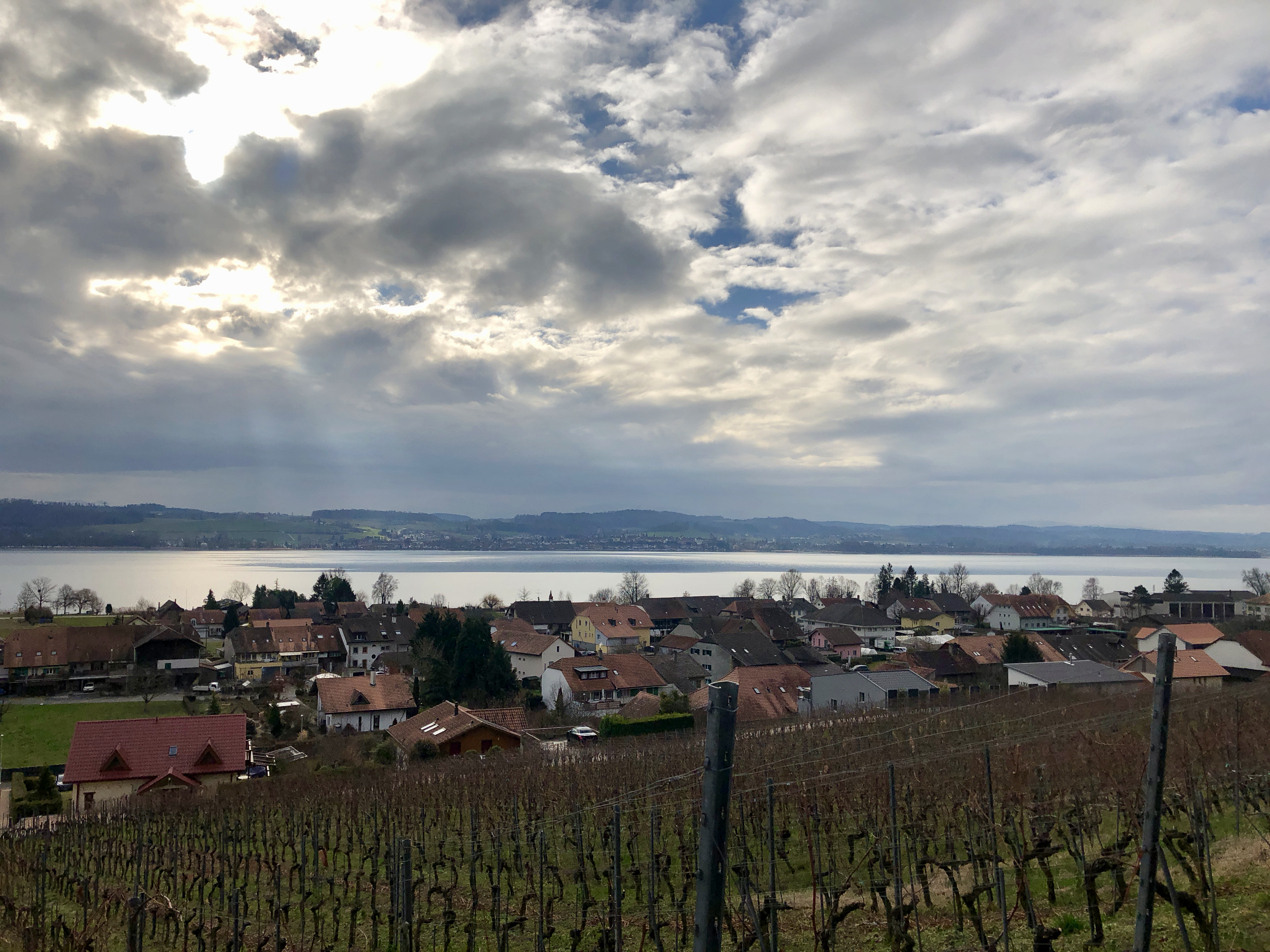 There are wine yards on the other side, if you like hang overs this is the place to be. I cross a town, a Hymer rv is parked next to the way. It is from before 1980. Local youth throws old breath at swans. I hike through the Chablais forest. The path is pure luxury. They have wood chips on all of the path and they seem even to love the boars, even as they do a lot of digging. If I would be a boar I would know where to go. Thick underwood makes it impossible to hunt here. Even the runners are friendly. They say that this forest is great however it is man-made, they planted Italian poplar here in the fifties. To make matches.

Where I came from….

…and where I need to go.

Another camping park an I’m in Murten. They have a medieval old city and they monitor their school children with obvious cameras. I salute the cameras with a common gesture as I have to cross the school campus. Somebody is practicing drumming.

Measures against all kinds of traffic. With the blessing from above. 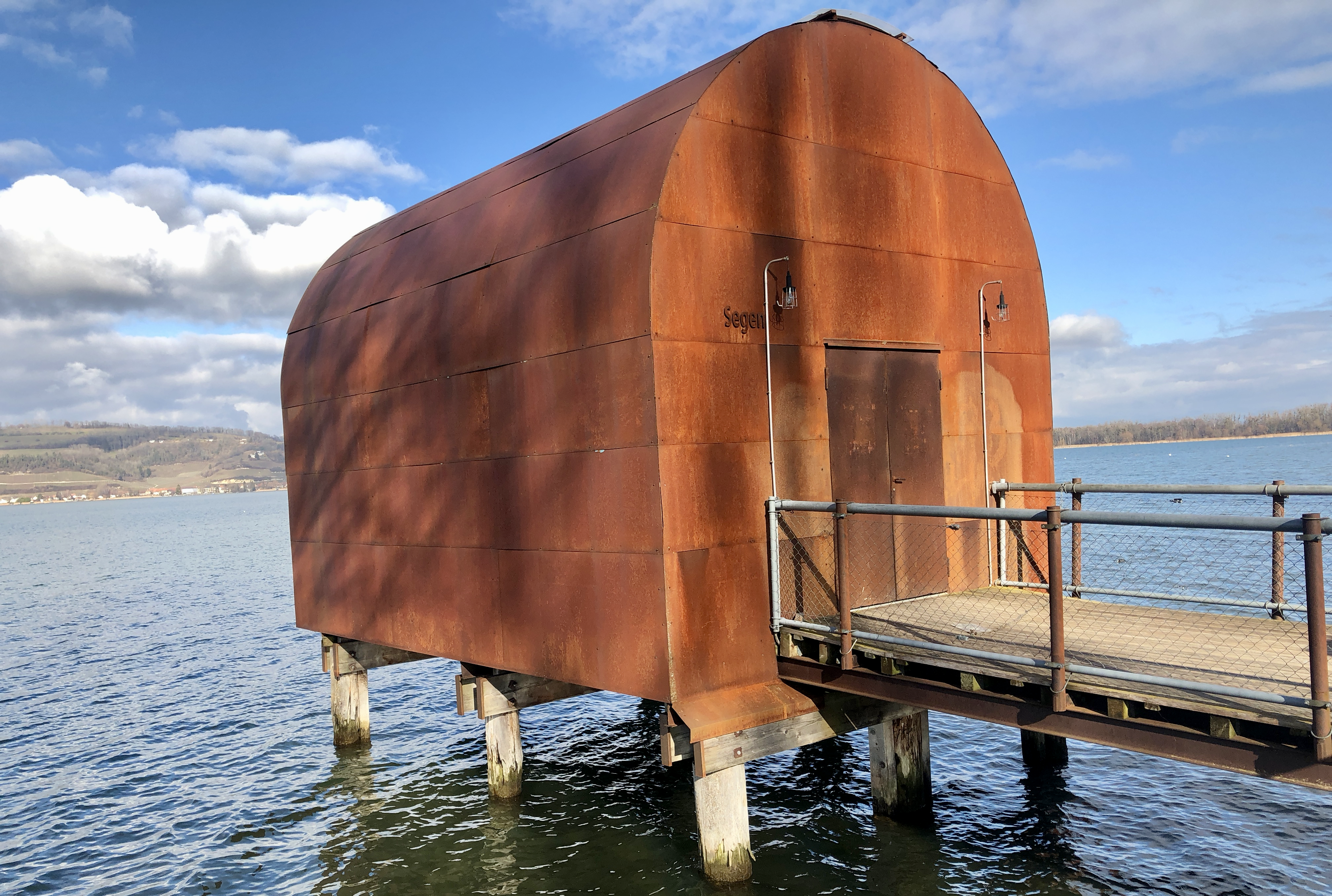 Shed from the Expo02. Was here last time 16 years ago.

Obnoxious houses, the forest reminds me to Verkehrsbegleitgrün. It translates to green accompanying the traffic. It’s just ugly. So are the dirt and gravel roads.

Everything is damp and full of mud. It is January, nobody expected a nice landscape, but these forests are just boring. Except once, where half a mile hasn’t been cleared yet from the blowdowns. It is quite a task to walk around them or to climb over them. 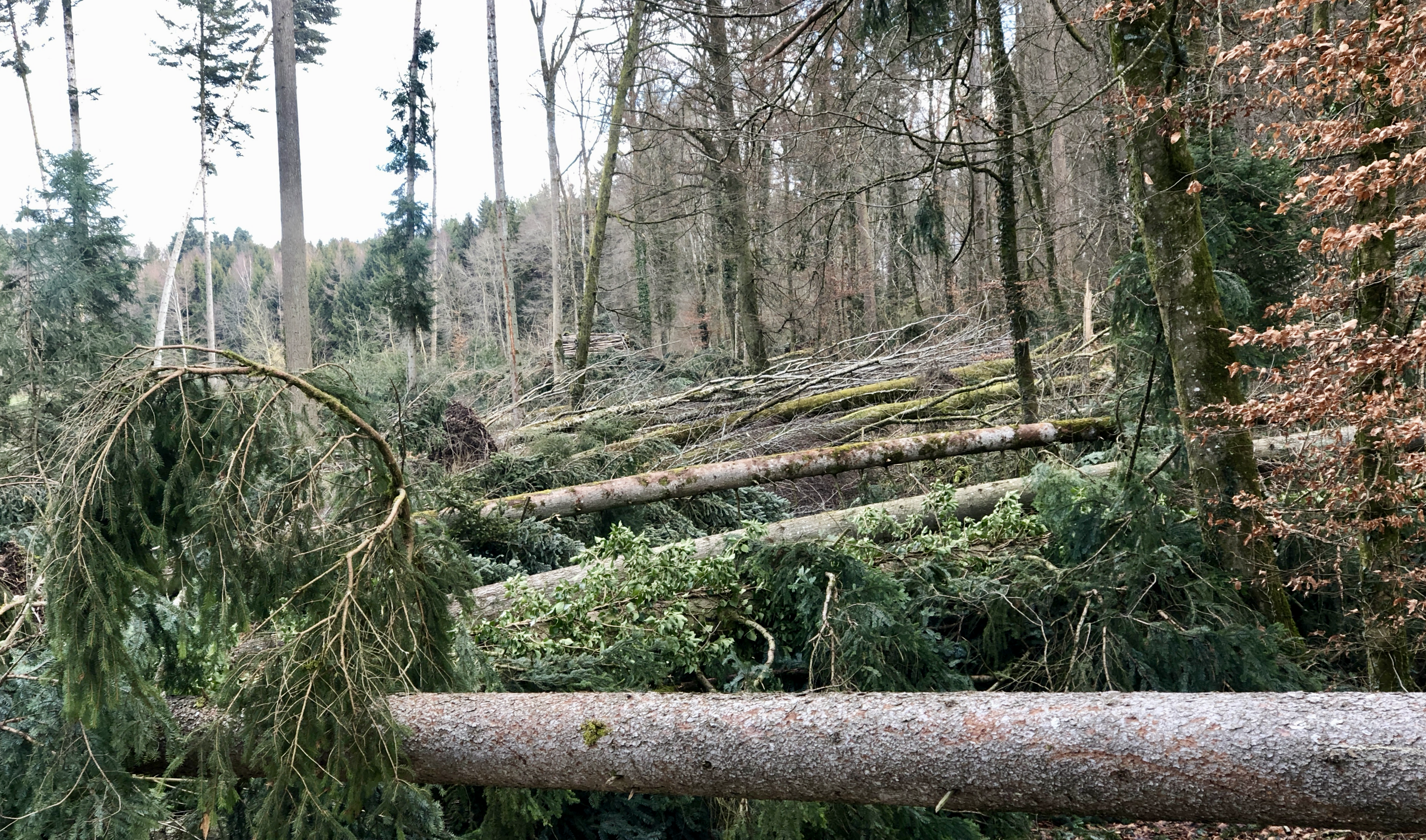 Can you spot the road? 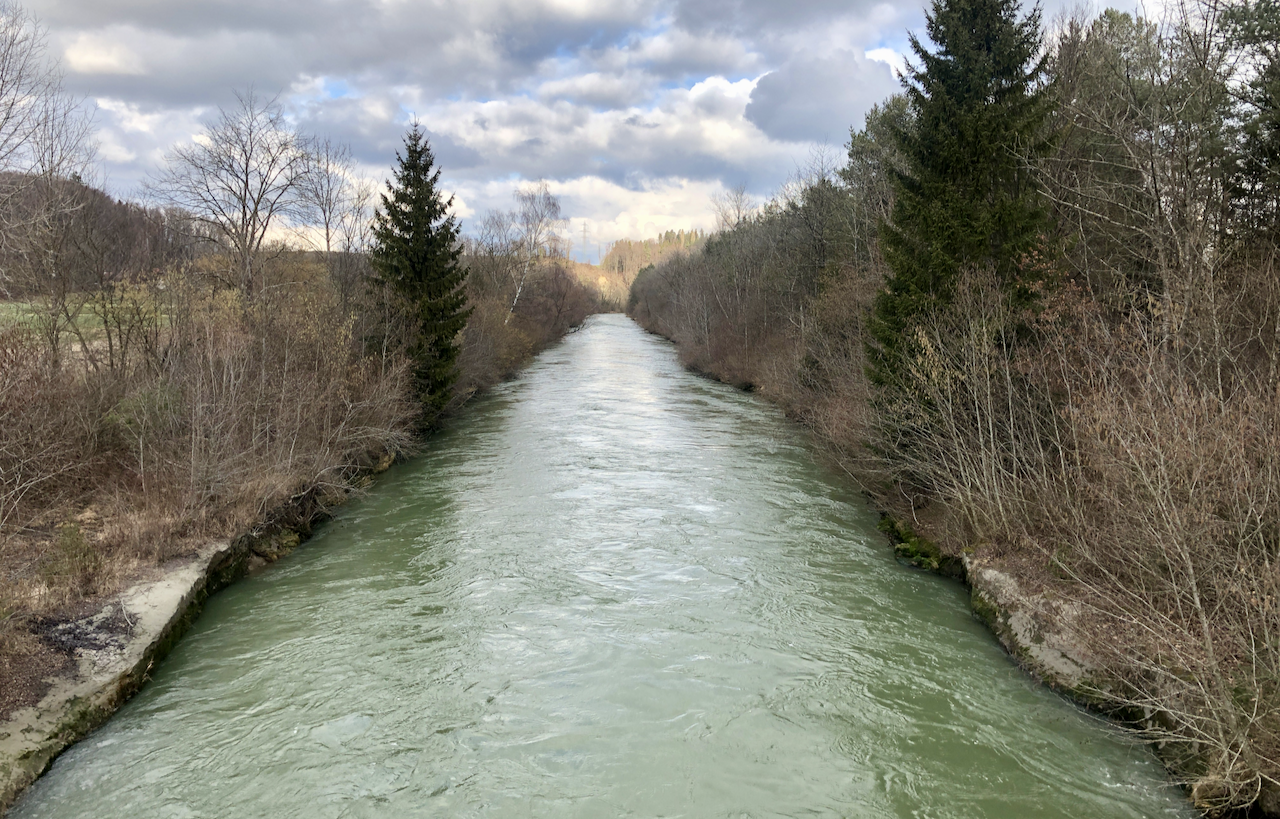 I come across a real trailer park. If you live in a camping park in January in Switzerland, you must be extremely poor. Everything looks run down here. Lots of cars without number plates. Usually normal houses have a lot of trash in the gardens but here people try even to be funny.

This wall is another measure against all kinds of traffic. Several miles long.

My feet hurt. I believe it is from the numerous concrete roads and because of the real bad shoes I have. They don’t fit my feet, but I can’t lace them better. Salomons own lacing system relies on these thin like cables. They cut into the feet if you tighten it too much. People always worry about this thin cable to snap. This would be the lesser problem.

My lobster style gloves are really warm. So warm that I wear them on the hip belt of my pack most of the time. Meanwhile it is 5 o’clock in the evening. The farmers milk their cows sometimes in stables which look like prisons. Most of the cows stand in their own manure some farmers use a motorized snow plow to clean it out.

While most of the day it was sunny, now it is snowing again. Time to end this hike but before I have to hike to the railway station of Bern. I enter the city from Köniz. It is not a pleasant city. They have not a lot of money which compared to Zurich makes things look like cheap. I am more than happy when I finally sit in the train back to Zurich.

I don’t drink enough when the temperatures are so cold. I did just more than 35 miles while drinking less than one liter. Unfortunately, now my options for hiking are running out. There is just not that much stuff I can do without hitting snow right here. I think they do a little bit much of marketing for the Trans Swiss trail. Like for the Te Araroa in New Zealand. They paint it in wonderful colors but everybody that does a thru down there will assure you, that it is one third road walking, sometimes even on bigger roads with small shoulders. I did close to a third of the Trans Swiss Trail now and so far, spectacular is something else. I know that crossing through the alps will be spectacular, but it will only be possible once the snow melted away.