Again, I got up 4 in the morning. I knew it will get extremely cold. It is the Jura after all, well known for being nasty cold in the winter. The forecast predicts temperatures below freezing until lunchtime. Without problems I arrive in Saignelegier.

The catenary of the train produces small flashes when the trains current collector passes humidity. Looking out of the train window brings some memories but the landscape is extremely peaceful. In Saignelégier I pass the building where they have a horse show in August.

An extremely expensive camper van is parked right behind it. I even know the model: It’s a charisma from the manufacturer Concorde. A Rottweiler dog wants to play with my poles. But he is well behaved and shows no aggression. No comparison to one week ago. He even follows the commands of his owner. He doesn’t bark at all and he looks healthy.

Unfortunately, the first three or four miles are on concrete. There are not many people around, but I cross a group of three runners I saw 40 minutes ago. Each one of them carries a vest and a huge bear spray can. Their legs tell me that they are professional runners. I salute them with a bonjour, the typical salutation you use here, they answer with hey.

The wind on the high plains is incredible cold. I breathe through my nose and take my buff up to underneath it. My shades keep the cold wind from my eyes. Unfortunately, my gloves are not up to the job. They are wind stoppers with additional insulation.

I keep pushing. My right shin does great. I cross the same towns I crossed with my parents three weeks ago. Little did I know then that this is the last big adventure in Switzerland. At least that’s what they write about this trail at Switzerland Mobility. I don’t think so. The trail isn’t even a trail at this stage. It is more a collection of forest roads and asphalt. The planers of this trail had a bad day anyways when dealing with this part of trail. The path doesn’t pass the Etang de la Gruère. Although artificial, it is extremely beautiful. 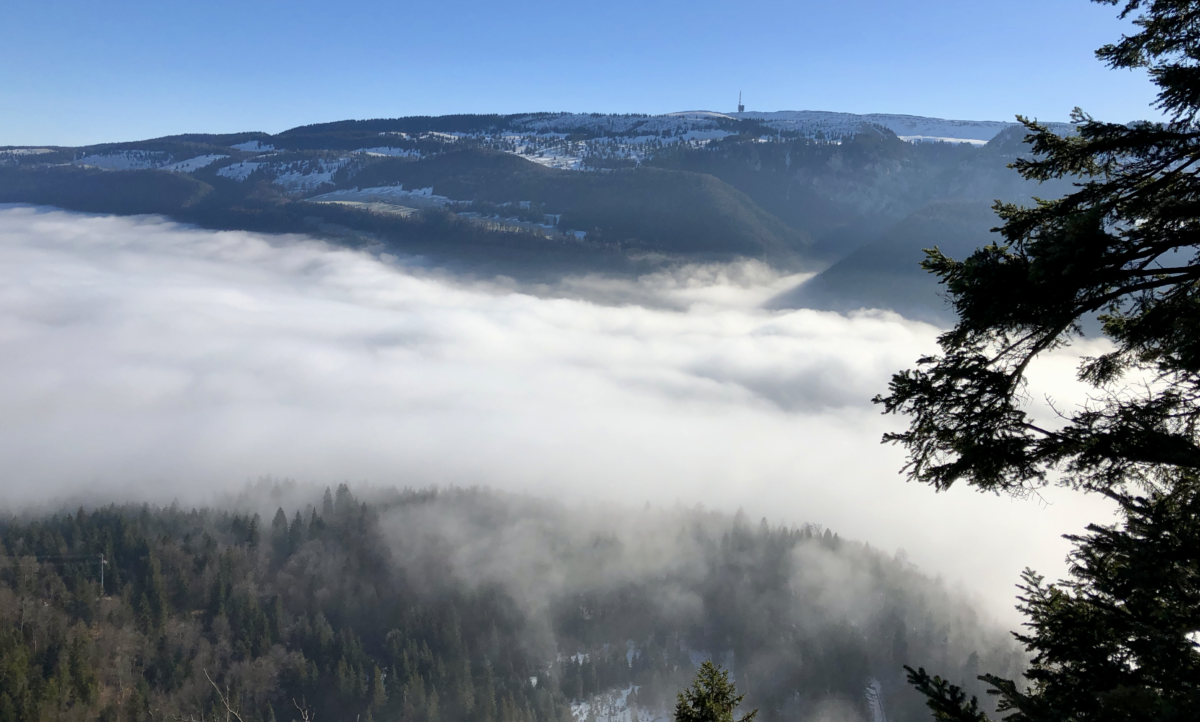 Had to climb down into the soup

I expected to find snow sooner or later. The snow is frozen solid but still provides perfect grip. The entire day I can fly over the snow and I love it. There are however massive blowdowns. After Mont Soleil I have to go down into the fog. Or the soup as we call it here. Saint-Imier is a small town. Compared to many towns in the German part of Switzerland it looks just run down. It has however some history, even in the anarchist field. 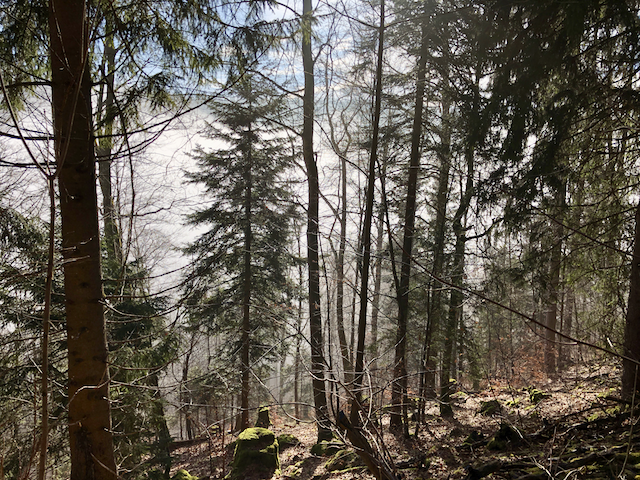 Had to compress the file. You better take pictures while the sun shines.

Some other long road stretches later I’m out of the soup again. I can even afford to get rid of my gloves. I have to cross a horse patch with horses. You can tell by the fence. Those horse fences are massive, consisting of two or even three electrical wires. They are 6 feet tall. Theoretically you could tell by the fence which kind of horses live in it. They have their own breed here.

God help us, the soup follows me! When I walked out of it, the first thing I saw was a cemetery.

The soup does clearly affect the beauty of this hike and by the evening I have spent more time in the soup than somewhere else. As we are in Switzerland I come by fake rock faces. A military installation, protected because of it’s importance. 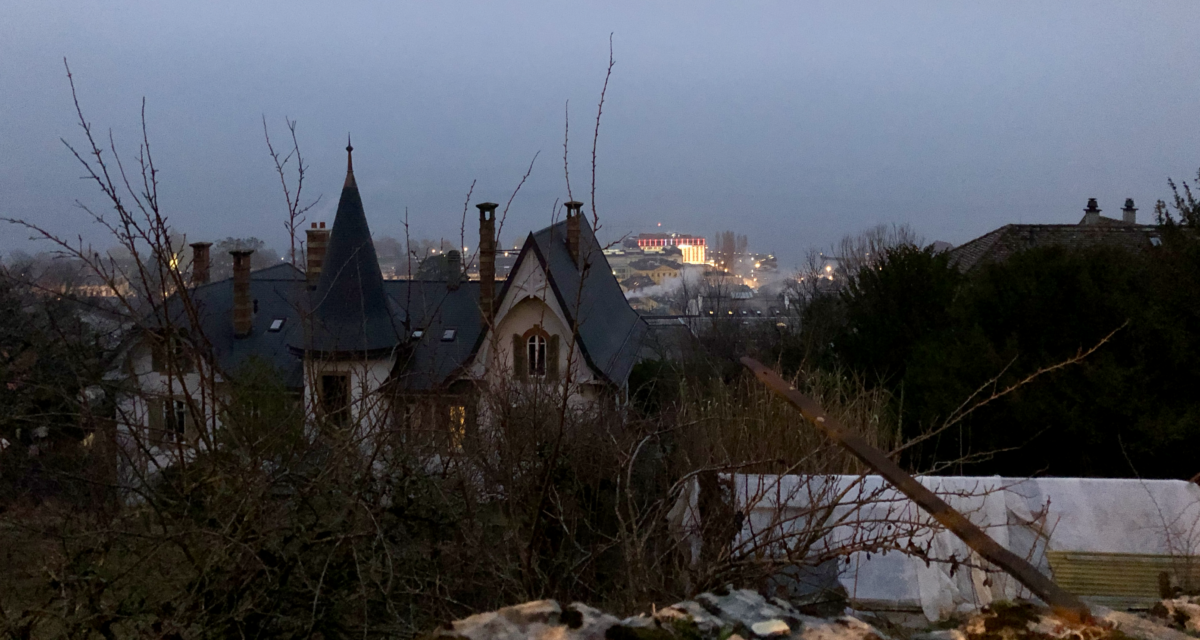 Peek over a wall – my lake view today.

The amount of dirt roads I have to walk on is unpleasant. I am not unhappy when I am back in the train. Before I come by a small shop window. A sign says “Colonia Libera Italiana“. This movement in Switzerland was founded in 1925 by Italian anti-fascists who fled Italy because of Mr Mussolini. Switzerland had a huge influx of Italian workers, they basically built the infrastructure. 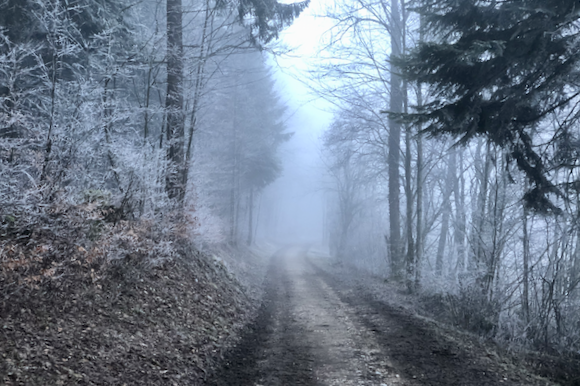 The trail will get worse however. It will cross Lake Neuchatel (there is no instruction how to cross it other than by boat, a real thru-hiker “true to the thru” would swim it, I assume, although it is at least 4 miles) and then lead to the city of Bern.

There the landscape isn’t particularly beautiful or spectacular. It will lead through a flat part of Switzerland, mainly known for its vegetable production. I have however not much other choice than to do this during winter. Other options would be to expensive (flying to New Zealand and so on).

Had to take Vitamin I on mile 24 and it does not make me happy to take this stuff.