Via Alpina 2: Linthal – Altdorf (and thunderstorms)

The forecast says: thunderstorms all over. There was a hailstorm already and nasty flooding not so far from Zurich.

It rains when I go to sleep and it is overcast when I hiked to the railway station at 4:30 am. I catch the train at 5:05 and after changing it 4 times I’m back in Linthal. The streets in Zurich were dirty: The annual Caliente festival took place. It’s the biggest Latin music festival outside of South-America. The streets look like those in Hamburg these days….(that was a joke, thank you). Lots of party people, the first train out of the city is nearly full. The youngsters are either drunk and doze off or they are still loud. No one bothers me. 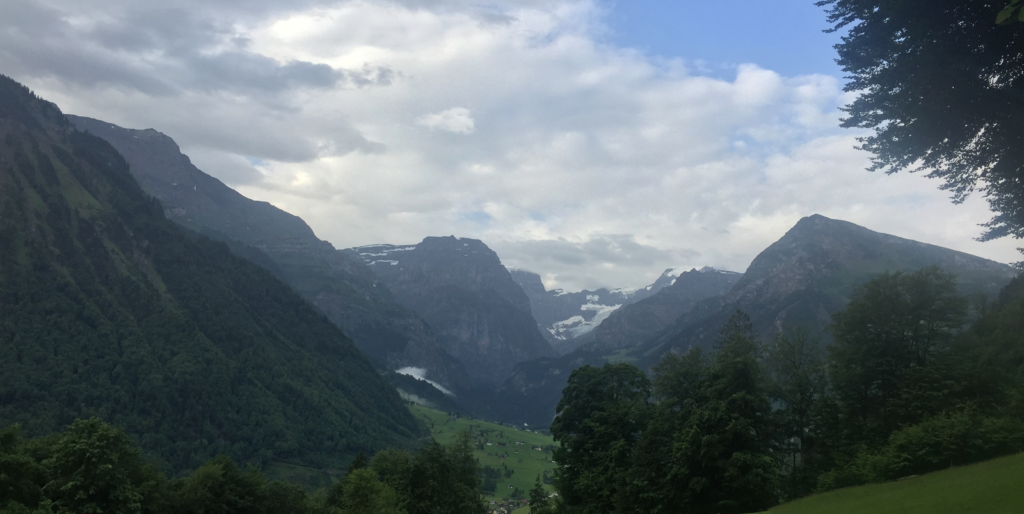 View from the ascent to Braunwald.

As I leave the train in Rapperswil the train is full of trash. That is however not my main concern. It rains. In Linthal I switch to my long winter tights, they are much too warm. Why didn’t I bring thinner tights? They recommend taking the Linthal-Braunwald funicular because of the height. Warmduscher again. I don’t even need an hour to climb to Braunwald.

From Braunwald it is easy sailing to the Urner Boden. A Chamois grazes just next to houses and she doesn’t flee when I approach her spot. Marmots are however more careful here (which may be because of hunting). The landscape isn’t too spectacular. The Urner Boden is even flat.

Urner Boden. The biggest Alp in Switzerland with 1200 cows.

Since I have lost too much weight on Wednesday I decide to eat in a restaurant. Although I spend 30 bucks, the food is awful. It lays in my stomach like a stone and it is too salty. There was a huge avalanche here that killed 8 persons earlier in the last century. 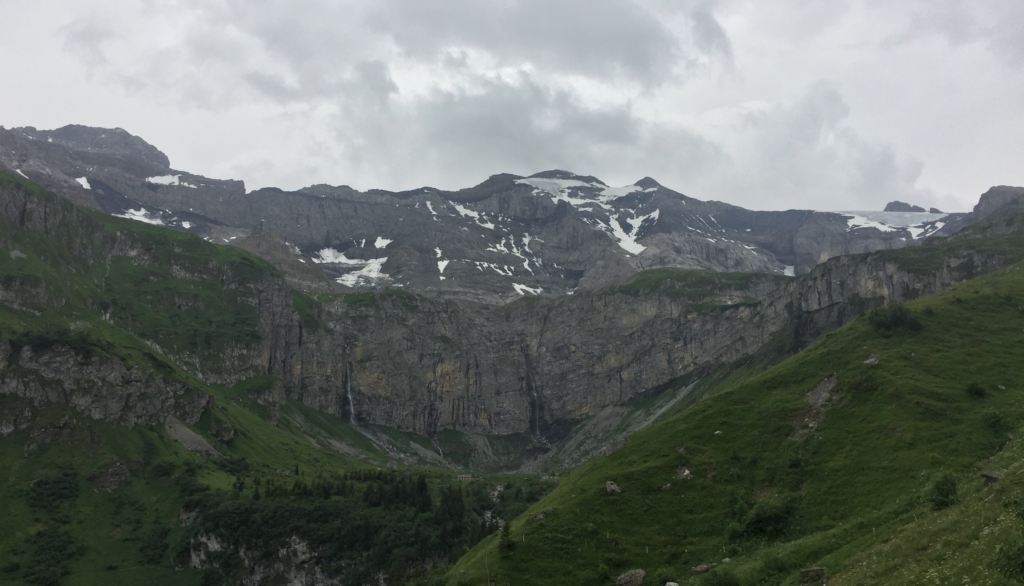 Over the Klausenpass there is a road and a famous car race once in a year. There are tons of military installations but they are not visible from the path. More people and campervans are up here. Entire cow herds are on the street. Idiots nearly drive their race bikes into cows as they try to have some racing feeling. As I reach the pass, thunderstorms are in full swing. It rains hard, sometimes it hails. I have to pass mother cows.

As the rain increases I can no longer rely on my thin Patagonia shirt. Time to get the some Gore-Tex on. I can’t suppress a smile when I get into my pants. I wear them just over the strider pants and I have to tight the belt to his smallest setting. I even get cool hands, so I have to stop again and mount my gloves. Two new things on my never ending gear list: Long, insulated full finger winter gloves from Leki and short ones for the summer. Those gloves have the trigger shark system integrated. The short ones I want because they offer a better sun protection so I don’t burn my hands.

The weather clears after one hour. Again I pass mother cows their pasture is just gross. It’s a mixture of dirt and manure. I have to stop again to get rid of my rain gear. Again it is smooth sailing to Bürglen. Except that I have to walk on an angels path. There are cheap angels and wise writings all over the place. This kind of experience-ways is in high demand by tourism organizations. There is hardly a town who hasn’t such a way. Although it is bullshit for the most part or just naive things for the kids.

In Bürglen there is even a Wilhelm Tell path. Mr. Tell is the national hero of Switzerland although it is evident that his story was inspired by another and older tale. They just copied it from the Germans. Historians doubt that Mr. Tell even existed. There is no grave of Mr Tell, but an impressive statue in Altdorf. Personally, I find other things more impressive: School kids in Altdorf have to pass under canons when they go to school, because their school house was built during the first world war in 1915. Or the remembrance stone for somebody who has saved Bürglen during the invasion of French troops during the year 1799.

Next time will be much harder: I will try to walk from Altdorf to Meiringen. I did something similar before but this requires some serious walking and running as I have a timeframe between the first and the last public transport. I will not attempt it on a weekend. There are some touristy spots and I don’t want to stress somebody with my hiking style.