Yeah! We can go hiking again. The weather is promising – it will not rain once during the next three days. Bonus: It is fall, the leaves on the trees are colored.

Theoretically, I can walk as far as my legs will carry me. There is just one restriction: I need a place to sleep. As usual I don’t book something in advance. And I have no clue, where I will call it a day in the evening. I know however, that it will get dark at 19:30 and I carry two headlamps. Both from Petzl, a company where the marketing is as strong as the products. Sometimes their ideas are not the best, however. On my 750-lumen monster, I can’t activate the red backlight only. Of course, I reported this issue to their support months ago. Nothing happened, although the support confirmed that this would be just a matter of implementing the function in the software. You can activate the backlight with your smartphone only. You can however switch of the Bluetooth functionality on the lamp. So, you are constantly switching. Switching on the backlight only would be useful in towns or along roads where you have enough light to walk but you would love a red backlight as additional security because of cars.

As I arrive in Hauenstein, it is still dark. Still bored out from the trail until Hauenstein, my expectations are not limitless. It will get pretty soon.

Not even after half an hour I can store my headlamp away. As I am a humble person, I switch off my monster headlamp when in vicinity of human structures and I use the small one instead.

There is the rising sun. The Jura mountain range runs somehow in parallel to the Alps, the mountains Switzerland is known for. Between the Jura chains and the Alps lies the so called middle land – a stretch of land that isn’t even 100 km deep. So, you have a real nice panoramic view. It changes because of the sun. In fall you often have a sea of fog between the higher points of the Jura and the Alps. This sea of fog is again spectacular for itself.

As I grew up in vicinity of the Jura I knew of all this in advance. So far, I never did a speed hike in the nicer parts of the Jura. As we were children, we often went up to the Jura, especially during the grey winter days down below. You could just walk for maybe half an hour and you had blue sky. The phenomenon could be observed less during the last ten years. Global warming?

The weather is just perfect for hiking. The temperatures hit the sweet spot where you can walk the entire day in light clothing (strider pants/capilene long sleeve shirt from Patagonia) without getting cold or too hot. I feel well protected too. There are barricades against attacking tanks made out of concrete and a strip of steel posts. They would have to just roll out the barbwire, but the bunkers are in perfect shape. Their camouflage is spot on: One has one side modeled as a rock, the other one looks like an ordinary chalet. Nothing bad can happen.

I pass a photographer who is capturing the sun rise. Just around the corner there are two chamois grazing. They can clearly see me, but they don’t care. I continue on a road that has seen two world wars as everywhere there are monuments for the soldiers that served here. 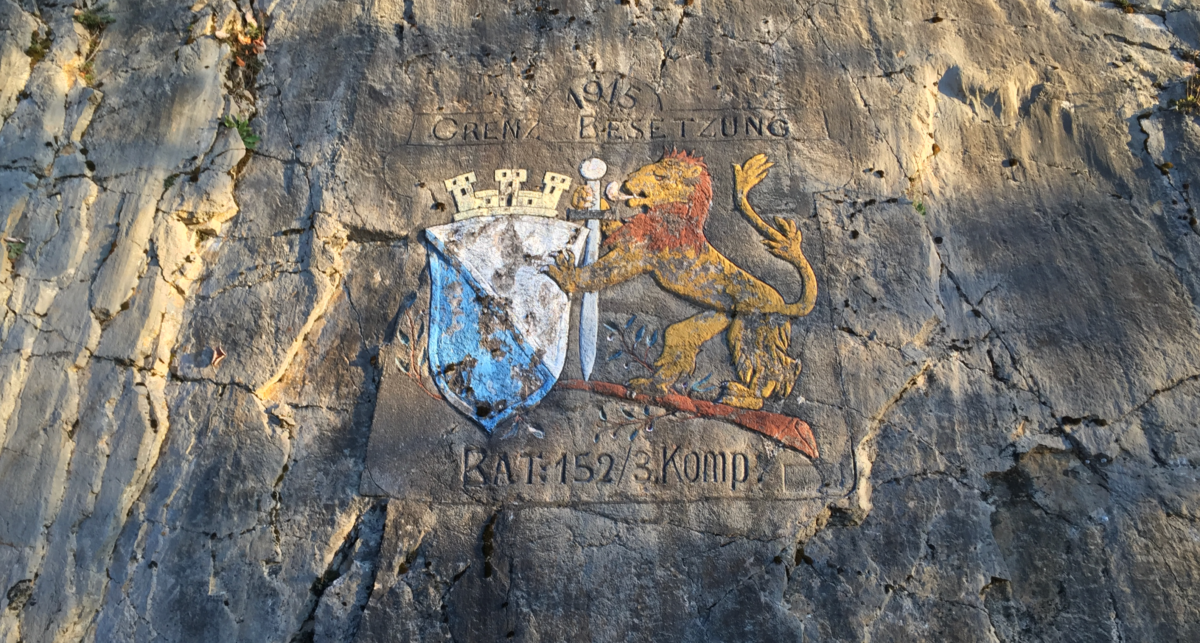 I feel like I am on drugs. These colors! During spring and summer, the forests are mainly green. But in fall. I have to force myself to walk and not take pictures every five minutes. The landscape is like soft. I walked from Sargans to Montreux this year and crossed all the tourist towns in the process. Yes, the Alps are spectacular, also from nearby but I like it more without ski lifts, mountain railways and stupid tourist attraction such as rope parks, scooters and so on. I come across medieval castles in different stages of conservation. Even the towns are reasonably pretty. 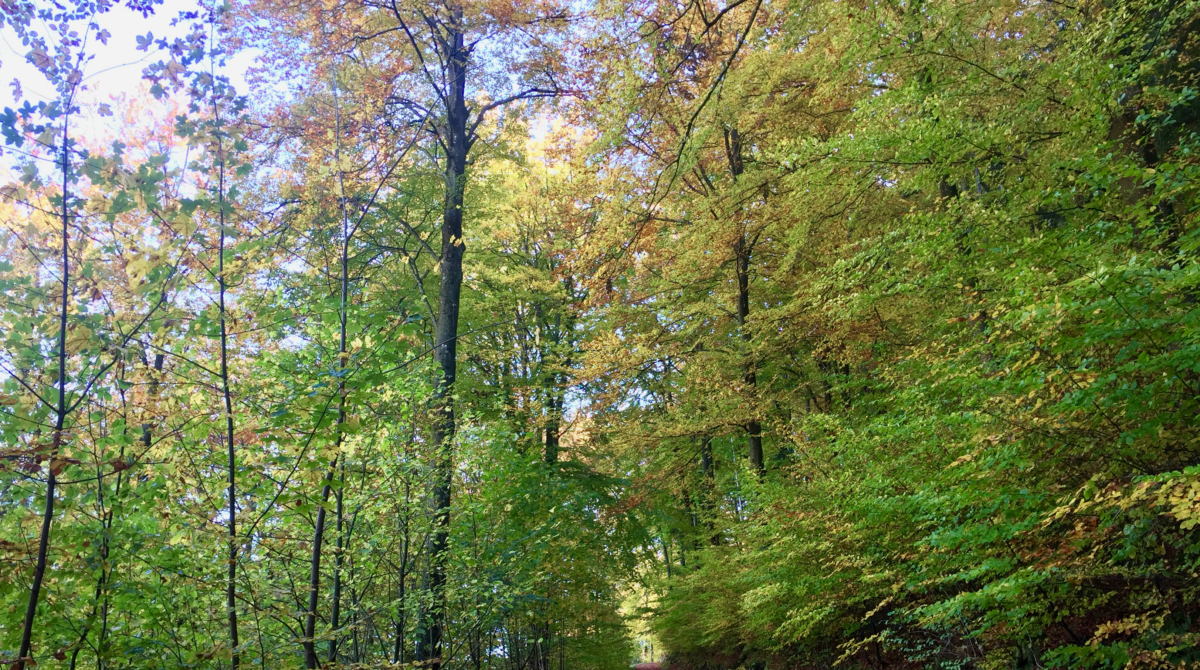 Water is a problem however. I just have one liter in capacity plus 0.6 liter in my filter bag. Once I spot a fountain I usually check, if there is water. You can also go to the restaurants, but this would be not so much fun, right? One fountain is maybe 50 meters below the street and I dive down. There are chamois, too many to count them. I do really check twice, as I can’t believe they are not goats. 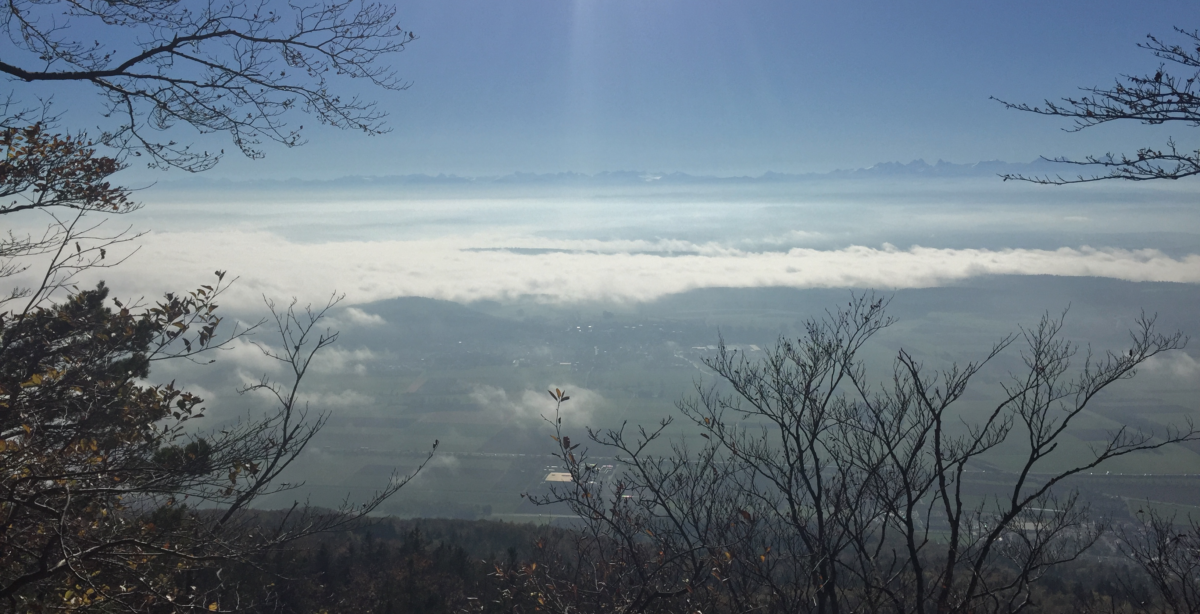 I make good progress, seldom hindered by dogs. A young boy thinks it is funny to run with his dog behind me. His parents don’t care as they are both on the phone. I tell him that he should get his dog away from me. Pepper spray in one hand, poles in the other, the dog is smarter than his owner. 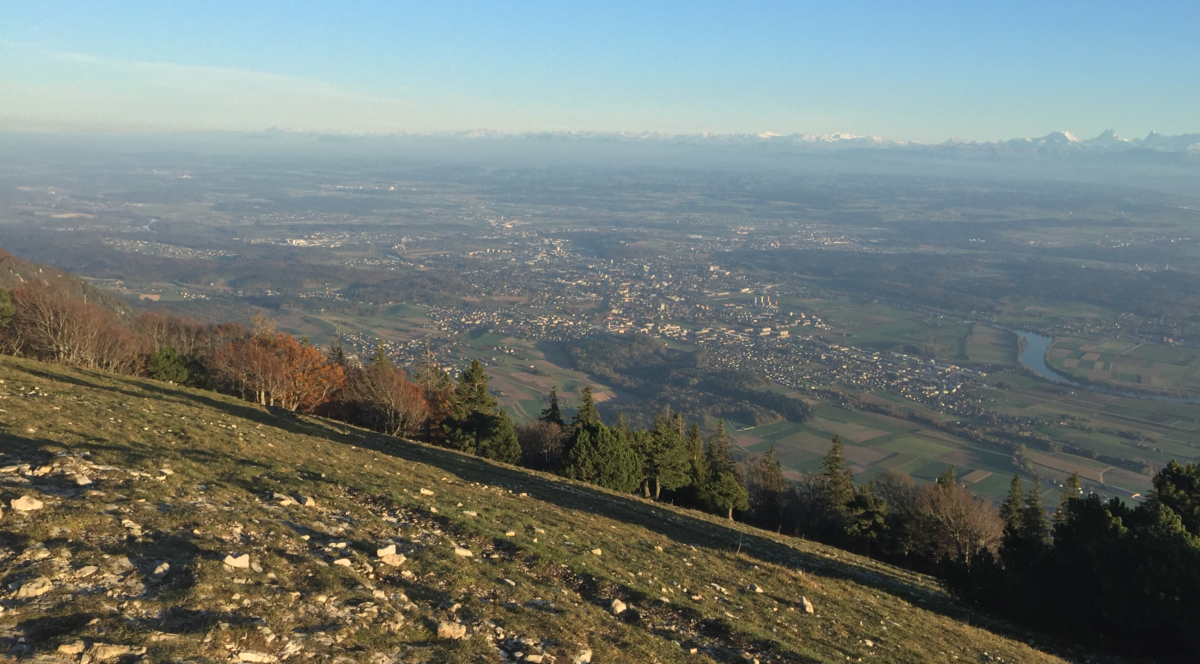 After 11 hours of walking and confirming with my mother that they have no fog, I am on top of my home canton. I do sign the guestbook on the peak, it is already 18:00.

All the other more or less sporty hikers have long gone home. It is amazing how many folks you see these days who are clearly in bad shape. I support the idea of being body positive, not everybody looks like Arnold Schwarzenegger in his best days but wearing functional clothes that seem to be too small? At least these folks do something, it can be a beginning.

I have to fight with the chamois to continue on the path. They hiss at me. I apologize in German and English, knowing that this is their home range. I promise them, that I will pay for their hotel fees, if they visit Zurich. It is time to start night hiking. 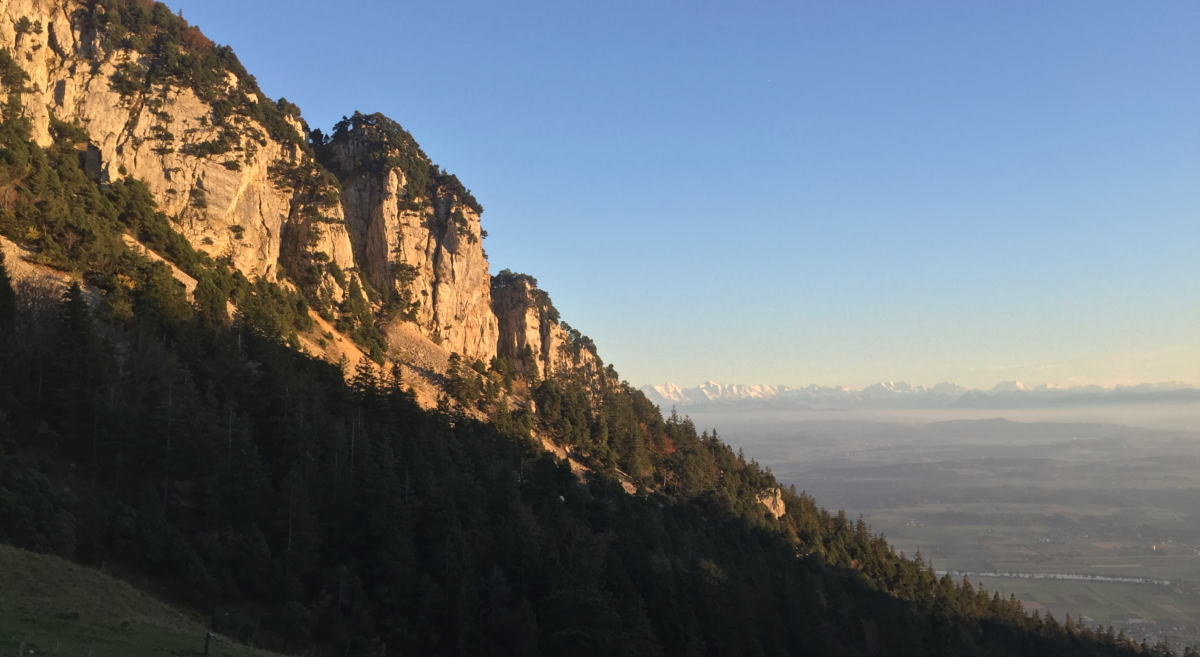 Leaves that fall to the ground make a noise. It is impossible to say which kind of animal is behind reflective eyes. However, sometimes I see eyes that seem to stare at me and once they even seem to stalk me in a secure distance. I know that there is a wolf and lynx in this region. 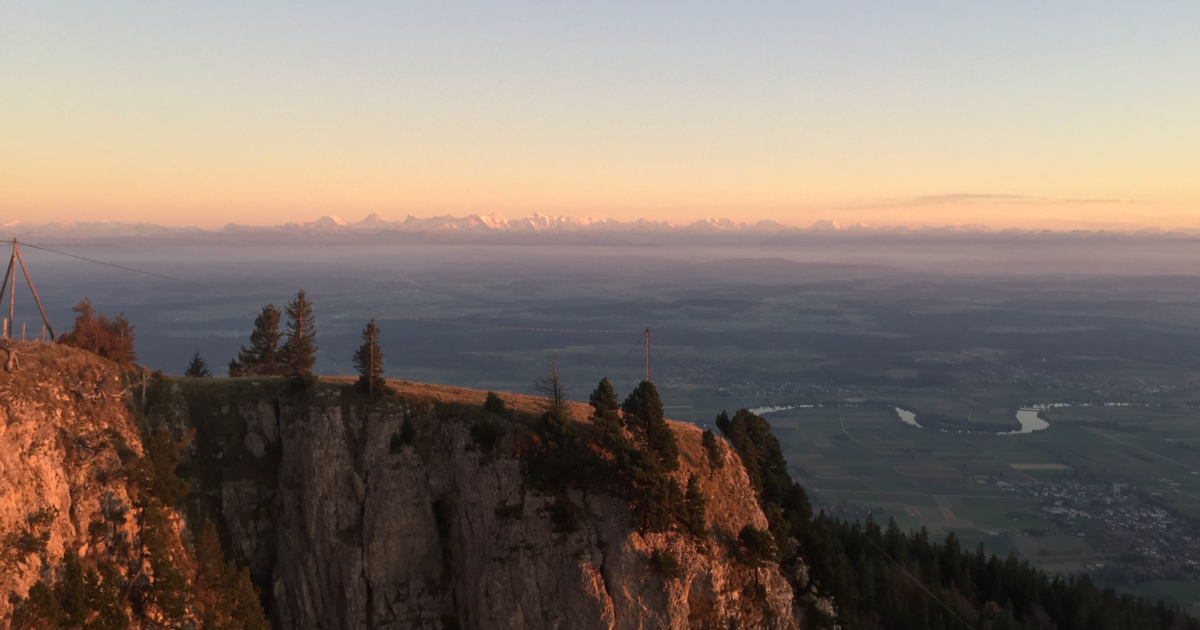 When I set my lamp to max power I can see quite something from the landscape. It is just breathtaking, like the forests during the day. It is already 11 when I finally arrive in Frinvillier, a town above Biel. I googled it to see if there are hotels. There are two in this town. I need one of those or I will face problems. I could do a 24 hour walk but would have to abandon my hike afterwards.

The first one is the Forellenhof. I am not sure, but it looks like a brothel. Red lights outside, nobody around. I continue to the next one, the Gorge Hotel. The way down to it is adventurous but I manage to reach it. I am greeted by a sign: “Fermé”. The door is closed by key. There is a fence around the house, but I see people on the back entrance. I jump the fence and go around the house. I just ask one question after saying “Bon soir”. “Est-ce que il est possible de dormir ici?” They think about but after 30 seconds they confirm “Oui, c’est possible”. No questions asked. I am lead to my room, a dog barks in another.

They didn’t find out that French isn’t my mother tongue. I forgot however, that Biel/Bienne is officially a two-language town. They speak French and German. The hotel leaves the impression of being rundown, there is no water in my room.

I am really happy right now. I found a place to spend the winter in Zurich. For privacy reasons I can’t reveal much details, but it is in a house I know well and my host is a living legend because of his kindness and his generosity – he is also one of the best political experts on the progressive side alive in entire Switzerland. It is even a tradition, that he offers his guest room to people who are somehow stranded. Sadly, he suffers from arthrosis in one of his knees and he had some problems with his muscles before. No hiking for him anytime soon. But I carefully watch out for nice places that are accessible either by car or by public transport – just in case he wants to leave the city once.