How I missed the train again. And how we do surfing on a budget in Switzerland. The most expensive two days in my life so far.

I went to Gstaad on a Tuesday. Normally I have to attend some office duties but the weather forecast was good. And only bad afterwards. So, what do you do. Reaching Gstaad from Zurich is quite complicated for Europeans who are not used to travel long distances. Everything looked expensive like last time when I was there three weeks ago. From the Hotel Olden you can just cross the street to the Cartier boutique.

Technically, I do the next pass for the second time. I did it already the last time but I was so tired that I erased this part from my memory and decided to do it again. It is still one of my favorite parts although the nice parts are very short.

After the last time, I throw my Hoka Challenger 3 shoes to the trash. They didn’t like the scree fields. I got a pair of Speedgoats instead. The people from the store write on their website, you shouldn’t do a marathon distance the first time you wear new shoes. I read it only after doing the marathon distance on Saturday. Because on Friday before I got a beer or two over my limit. This would be another story however.

The Speedgoats feel like marshmallows as they are also max cushion shoes, like the Challengers. They are incredibly soft but you don’t feel a lack of power resulting from their wobbly sole. Thankfully they even feel comfier this time, as last time I was able to feel some seams. I would seriously consider them as my new standard hiking shoe, if they would not be so pointy in the toe box.

The first pass to L’Etivaz is quickly done (they have their own cheese). Cows lie on the trail, some even come after me. If you tell them to stay where they are, they will not bother you. On top of the pass the civilian service, an alternative to the military conscription in Switzerland, has rebuilt a stone wall. After the pass, it becomes a little bit boring.

I do the first Swiss country style surfing. In other countries people climb to the roof of their Teslas and surf on them while the Tesla moves autonomous. In Switzerland, everything is a little bit cheaper. When the color of the soil matches the cow manure and there were enough cows doing their business, you have a hard time not to fall in. Even if your shoes have 4 mm logs. Shortly afterwards I find a fountain where I can clean my shoes. I came by one earlier but it was near a house so I didn’t want to pollute the water.

In Chateau d’Oex – a place famous for hot air balloon flying – I go to the Coop and buy a stracciatella ice. I eat the ice and ask myself why I bought stracciatella and not something else. Then I remember: I read the comments under Wireds blog. Fans explained to her what stracciatella is and so on. Her blog is sometimes funny. She pictures a fountain with stone dolphins and writes that she added dolphins to her wildlife sighting list. And the blog is modest. Other popular bloggers (she promised she would continue to blog in Winter 2017) write about fantasies or explain every detail you don’t wanted to know in the first place.

After Chateaux d’Oex it is a classical connection passage. They did re-tar the streets only for me. The tar gets to my shoes as the logs shovel away the small stones on top of the tar. Suddenly there is a sign, forbidding further progress on the trail. They do logging. There is no alternative. I continue anyway. There is just one worker from the railways cleaning something. No logging at all.

Somewhere before the Rocher de Naye. The lake is an artificial reservoir with a dam to produce power.

Soon I am on top of another pass. I run down the other side. The farmer there is a real asshole. Instead of putting some small, easy to open gates in his fences, like every other farmer would do, he built massive barricades out of barbed wire. After I cut my finger on it and I pass the third such barricade I let it open on purpose. May all his cows run away or a wolf bite him in his private parts.

Clouds move in and the sun sets. As usual I can’t get a decent shot of the sun set as I am just behind a mountain. I move thru a valley for over an hour now and I hope to get out of it soon. 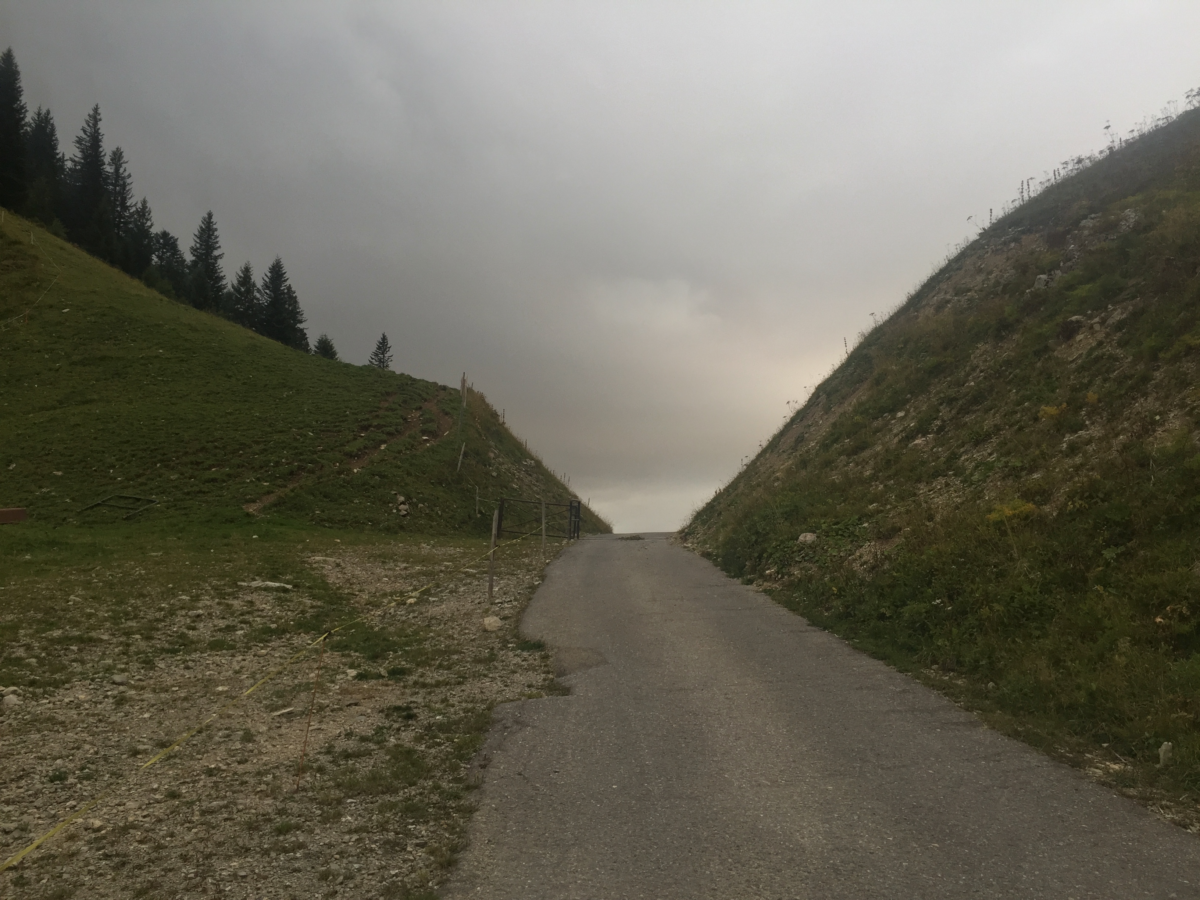 The end of the valley – what may lie behind it?

As close as I could get to the lake by daylight.

In the forest, it is already pitch black.

I have to do ridge walking up to the Rochers de Naye. It is not steep and even if I would lose balance nothing would happen. Off course there is a cow herd on top. At least they are nice although it is a mother cow herd. I don’t want to shine my night lamp into their eyes but I lost the way and I pass right thru the herd, searching the way. It is 20:30, the sign claims 4 hours down to Montreux. The last train to Zurich will leave in less than hours from Montreux. Still doable. I run down. You only need to lift your legs; the rest gravity does for you. I cruise with 9 miles per hour for one hour. 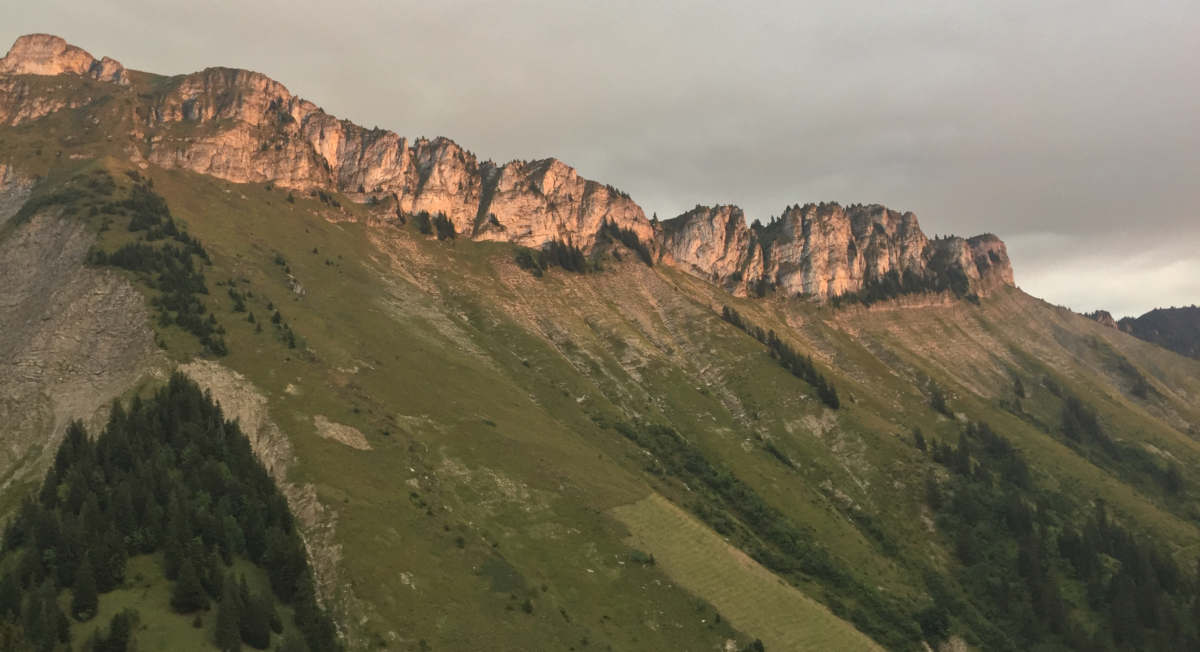 Rocks in the last sun rays of the day.

Unfortunately, Montreux has a huge suburb. I can’t race through it with my headlamp on, as I would blind the poor motorists (and with blind I mean it, the thing has 750 lumens, it is extremely bright). I lose the way again and again. The shoes are still extremely comfy. They are even better to run on asphalt than the challengers. They are smaller overall in width but they fit my feet better.

On 10 pm I decide that I have seen it with running and arrive half an hour too late in Montreux. I start a desperate search for a cheap place to sleep. It is warm enough so I decide to sleep by the lake. Sure enough, I find a nice place just nearby the Jazz Festival hall. Unfortunately, clouds move in.

I do a search again, they have a nice suite in the Eurotel for just 340 Swiss francs. It is way too expensive for me. I stroll around the lake, find the statue of Freddie Mercury. He must have a lot of fans still, as his statue is surrounded by candles.

All hotels have the reception closed, except the Eurotel. So, on 1:30 in the night I move back to this place. The suite is now 40 CHF cheaper. Of course, the room is full of BS. Who needs a Nespresso machine in his hotel room? Do you have a coffee maker in your bedroom? I don’t drink this coffee anyways. At least they have a good breakfast in the morning. Still with Nespresso coffee but I am able to find “American coffee”. I eat a lot and then go back by train to Zurich. The whole trip costed me more than 400 francs. Without this hotel it would be even reasonable. 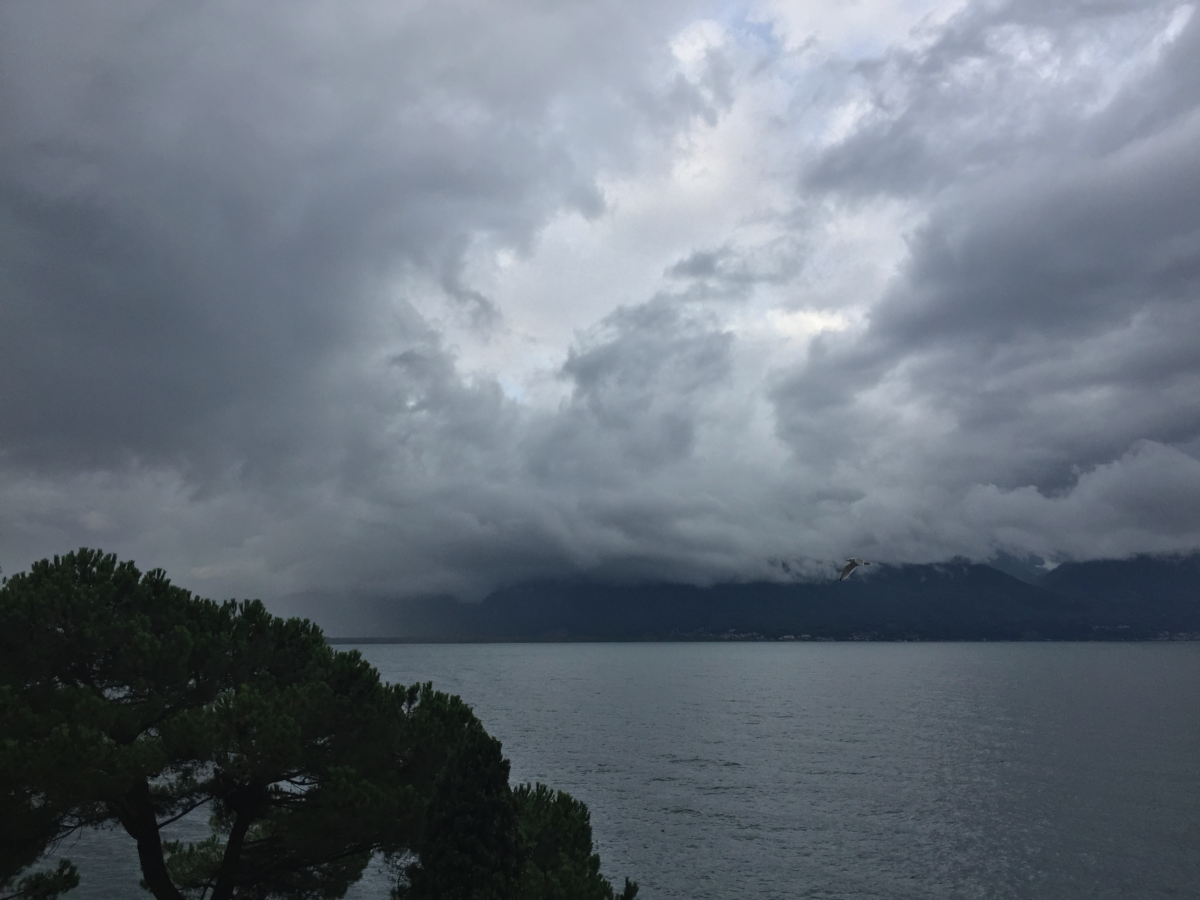 The view from the suite…

Next: The Jura Crest Trail