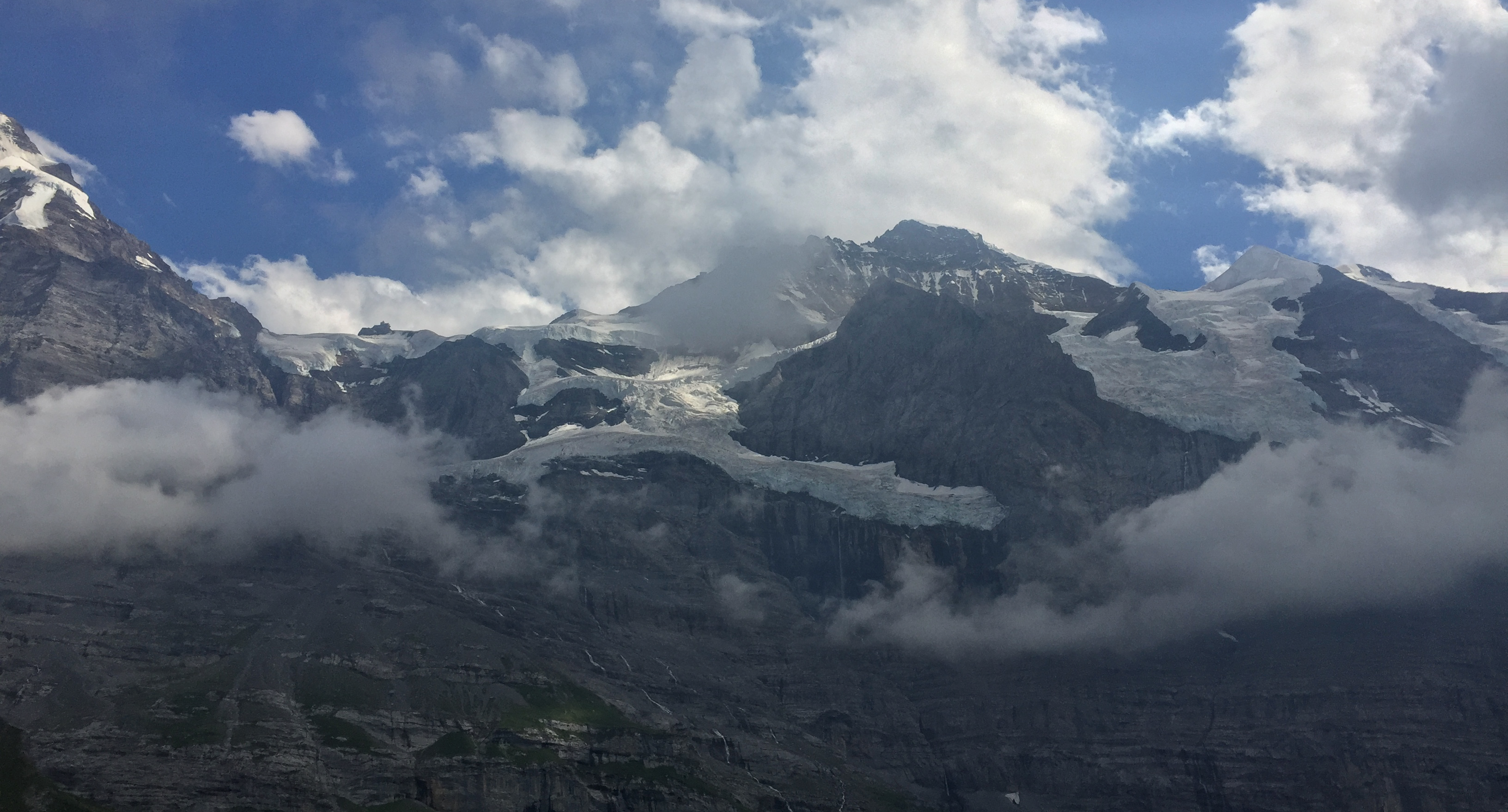 I get into a little stress in the morning. Have to catch the 6:04 train, otherwise I have to wait an hour on the train station. Everything works out fine, although I do overtake some joggers while walking, this could be seen as arrogant.

After 2 hours of train ride I am back in Meiringen. As usual I am the only one walking through the town. All other hikers prefer to take the bus high up in the mountains. 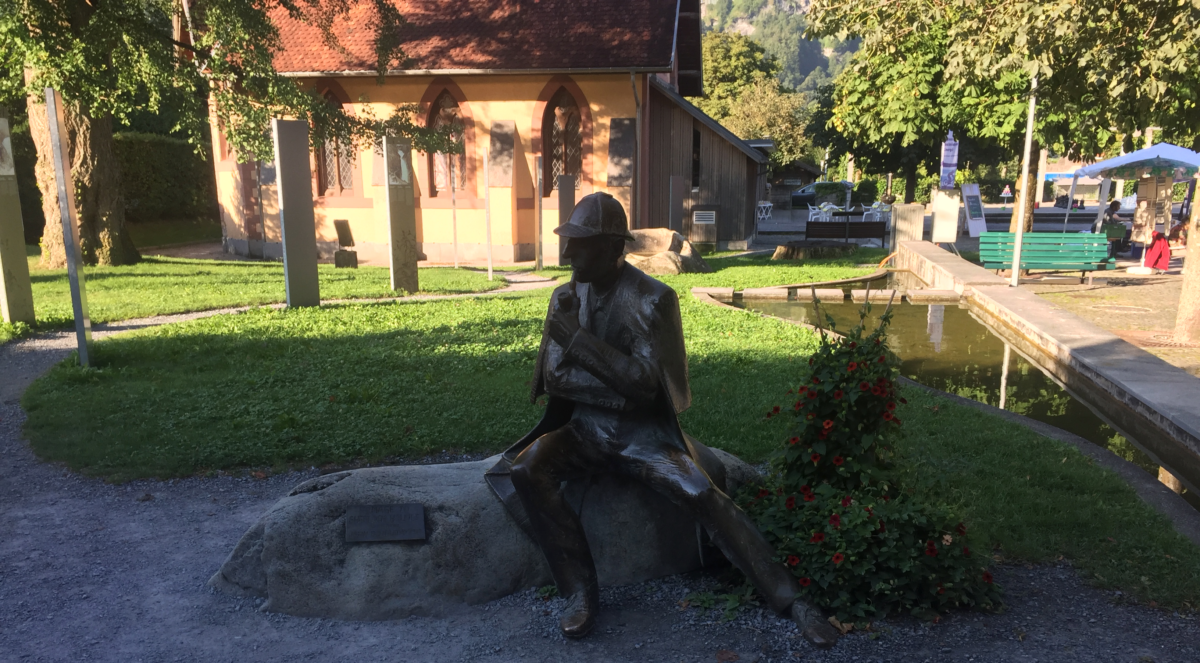 The via Alpina is a route over mountain passes. For every pass, you have to ascend and then to descend deep in the valley. I never take a train, bus or a cable car. Instead I leap frog with two mountain bikers as the path crosses the street several times. 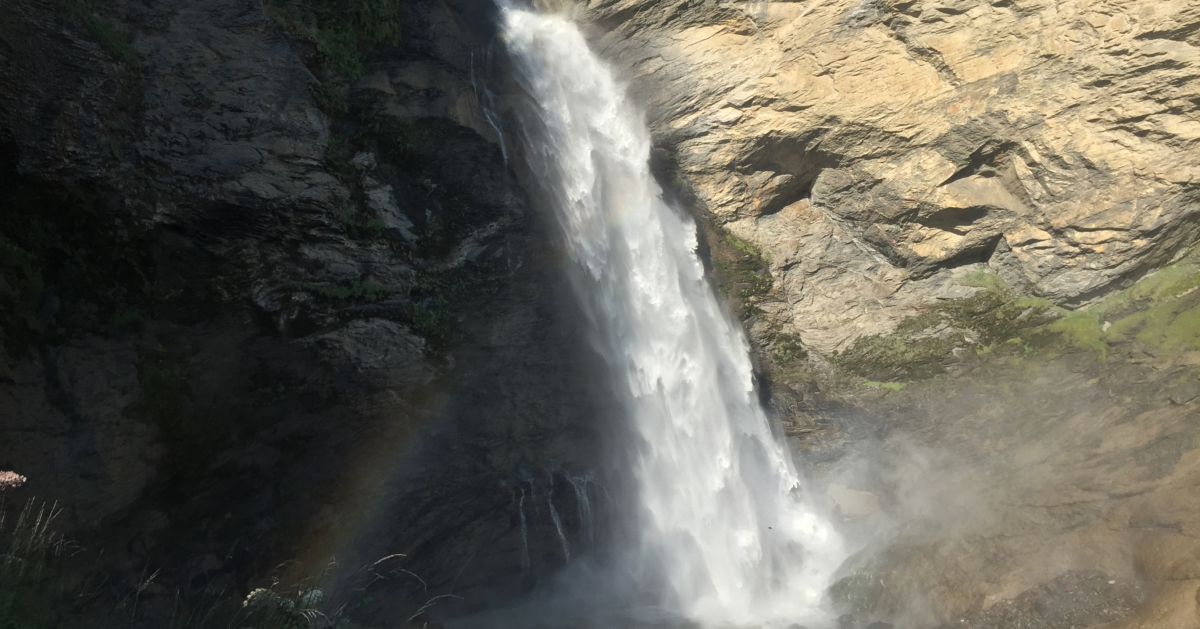 Climbing up the trail passes the Sherlok Holmes falls. It is neither a pretty fall nor is it remarkably high. Compared to many other falls I cross during the day it is not even extremely steep. Plenty of terrain to rescue yourself if somebody pushes you down from the trail. 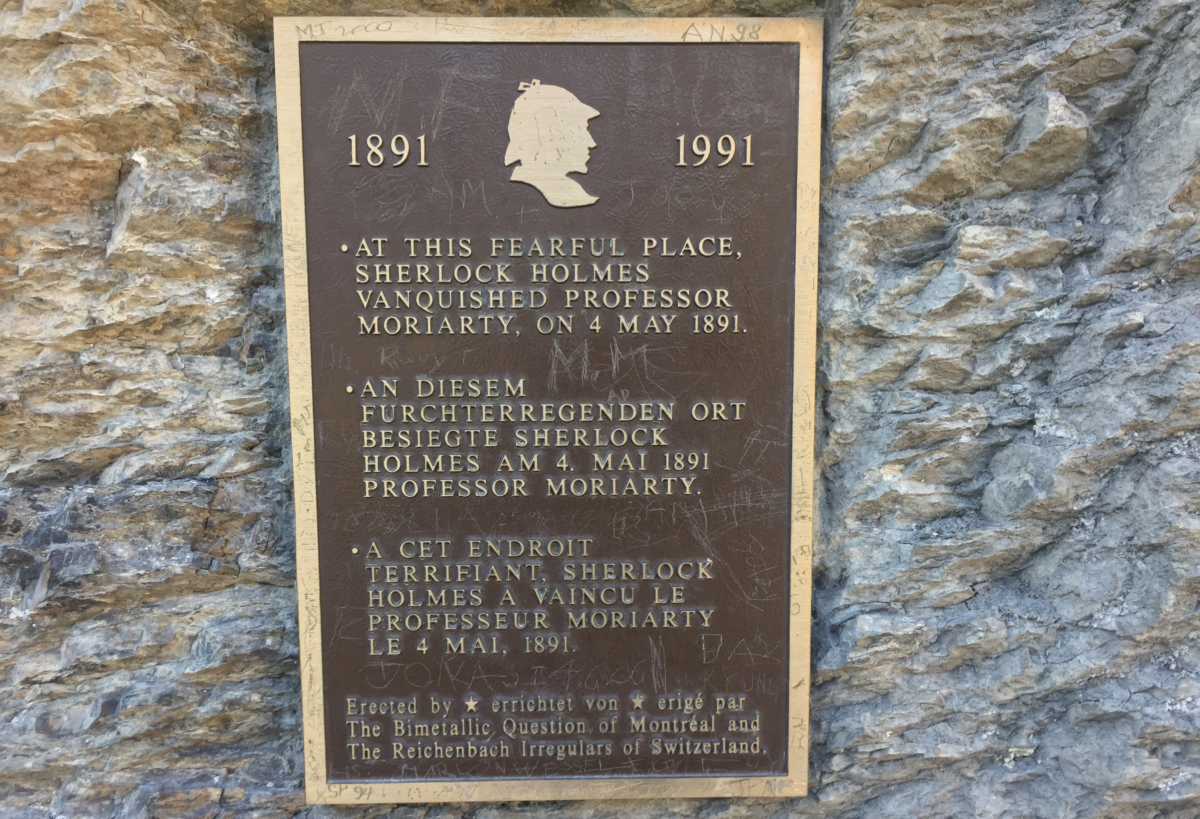 After the unpleasant experiences with horse-flies on the Rigi I geared up on the chemical front. I wasn’t sure whether my sun tan lotion gets compromised by my mosquito repellant or vice versa. Therefore, I bought a combination, developed in Switzerland. It offers SPF 50 and protection against mosquitos. No more problems with horse-flies. I do all kind of technical breaks but the first one to spray this product.

The road is popular with road bikers. It is so classical: The more expensive the bike, the more overweight the one carries who sits on it. Without a carbon frame, it is apparently forbidden to use this road. Lots of bikes are made on order only. I see several BMC time machines. As Engelberg, Grindelwald is a paradise for tourists. They have just more of everything. Like on the Rigi there is an extensive rail network, even to the top of Europe, the Jungfraujoch.

The first of hundreds

First however, I have to cross the Grosse Scheidegg into Grindelwald. The way is nothing to write home about. I pass funny places, like the Hotel Roselaui. It is extremely pretty and relaxed. The hotel itself is from the year 1779 and has neither TV sets nor WLAN.

As there is a paved road over the Grosse Scheidegg, there are cars and cheaters with their electronic spiced up mountain bikes. I doubt however, that they need their all terrain profile on the wheels. For most of them asphalt slicks would be the better choice. There is more than one fatty bike on the road. As if I as a hiker would wear the newest biofuse edition from Speedo.

I remain friendly and say hello to everybody. Except to the cheaters. If there is traffic on the path I always jump to the side or I even open the cow fence for others. For most of them I feel kind of sorry. They are dressed as if they were flown in from the Arctic’s. Their shoes are heavier than my pack with three liters of water. They move so slow and often have red faces.

The first glacier today. Stoped counting at number 6 or 7.

There are Arabs and women in burkas. A man jells “yallah shebab” as he has reached the train station and his family or group is still on the other side of the road. Of course, our ignorant right wingers want to forbid the wearing of the burka in entire Switzerland. They claim security problems or even the oppression of women. In my personal opinion, everybody has the right to dress however the individual wants or go nude. There are a lot of conventions and pressure from social aspects but those are not solved if you forbid a particular way to dress.

View down to Grindelwald from grosse Scheidegg. Will climb out of Grindelwald in the middle of the picture.

I am happy to leave Grindelwald but I know that it is not getting quieter. It is the weekend and I am approaching one of the biggest tourist attractions in entire Switzerland. The hiking path remains ugly. It is either a dirt road or paved. I see nobody else serious hiking. People ruin their expensive fashion sneakers; Japanese women do all kinds of poses.

The path follows a rack railway all time. The trains rattle through every minute. The area is a big ski resort in winter. The world famous Lauberhorn ski race starts right around the corner and parts of the trail are on the race track.

Above all this Disneyland is the Eiger-Nordwand. This giant north face is admired by many in a morbid fascination. The first time it was successfully attempted in 1938 by alpinists who were active members of the nazi-party or even joined the nazi-movement before the party was established. After their success, they were invited by the fuehrer. The main route through the wall is still named after the leader of the first group that has made it through (he was a soldier later and fought on the eastern front – hopefully in discomfort, he died in 2005).

Nordwand under the clouds

So far, this rock face claimed more than 70 lives. Before the first successful attempt many died trying, some of them in sight of rescue personnel. Rock climbing in the Eiger-Nordwand remained a life-threatening experience for many decades until better material became available in the 70s. There is still one person missing in this wall. The Eiger-Nordwand belongs for sure to the triple crown of rock climbing and today it is no longer considered dangerous, if you know how to rock-climb. Todays speed attempts are made during winter and the current record holder died this year in the Everest region. Being in Switzerland, there is also a train station in the wall.

As I pass in front of the Eiger-Nordwand clouds move in and soon afterwards it starts to drizzle. I descend to Wengen. Again, a heaven for tourists. Hail clears the place in front of the railway station and I continue down to Lauterbrunnen. I am hiking for 12 hours now. To Mürren it is only 2 hours. I know that I need generally half of the time indicated by the signs. 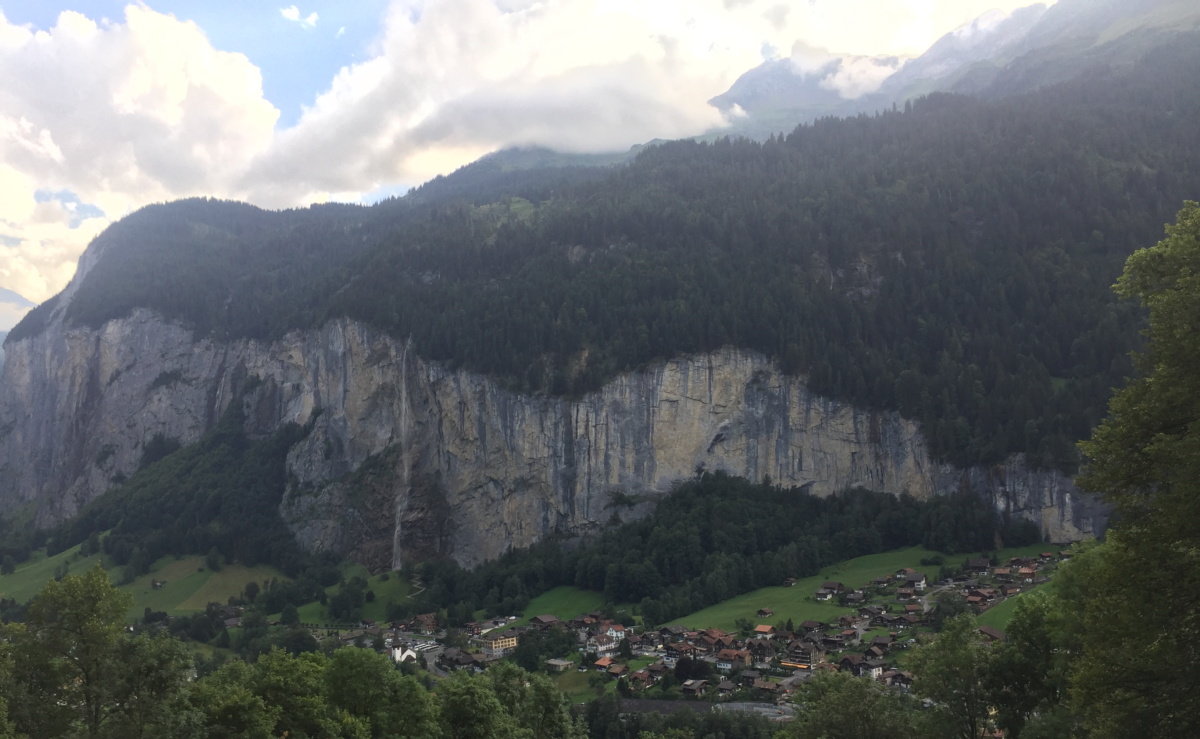 View from Wengen down to Lauterbrunnen. Mürren is above the rock face, one mile on the left of this picture

I have however no place to sleep so far. Thunder keeps me alerted on the way up. I seriously consider sleeping in a barn. Many of these old mountain cow huts are no longer in use but offer rain and wind protection. It would be free of charge and nobody would notice me. I can’t afford a train ticket to Zurich and back again tomorrow. It is a problem to reach Lauterbrunnen or even Mürren by train – I would lose to much precious time. I figure I am warm enough with my down jacket and all my winter gear. I would recommend this method anytime to people on a budget – of course only if you leave the places better than you found them. Then I even find a perfect structure. No doors or windows to break in but a pretty secluded room, even with some foam plates in it – clearly used for sleeping before. Graffiti’s from 1985. There is a problem however. It is just 20:15pm. What shall I do the next three hours? So, I continue towards Mürren.

I know this town: Ski camps were part of my curriculum in basic school. This could also be a backup plan for spending the night. I imagine myself to ask some leaders of a youth camp for a spare room. When I finally reach Mürren, it still rains. I know that the town is booked out. There is holiday season and I am not looking forward searching a place in this touristy town. Instead I ask in the first hotel I come across. The lady says she has just one room left and asks me if I came from Lauterbrunnen. I say yes and she nearly starts to say sorry because the way is apparently steep. I tell her that I come from Meiringen. She turns pale but then she remembers that there are railways. She asks me if the trains were not full of tourists. I answer that I did not take any trains. She looks at me as if I were a ghost. 100 bucks later there is a pack explosion in a room who I would sue the state if it would be my prison cell (there are minimum sizes in the European human rights convention). After a quick shower, I go to bed.

A word of warning: This hike should not be attempted by untrained people in the heat of peak summer season. Climbing on steep paved roads can lead to all kind of problems. The ascend from Grindelwald to kleine Scheidegg alone is more than 3379 feet. Most of the time there is no shade on the trail.

It is impossible to carry enough water for the entire day. The time you would spend to go to shops to buy resupply would slow you down. I bought a new water filter before this hike. The flow rate of the Katadyn Be free filter is sensational compared to the Sawyers. However, they say it needs replacement after 1000 liters and of course it is more expensive than the Sawyers. And although the water bag for the filter is from Hydrapack and kind of robust, the filter can’t be operated on a standard bottle. It fits onto other Hydrapack bottles, for example the Salomon flex bottles. Only their thread is too short so the filter will not hold tight.

Next time: A day in the rain.