It is day two of my mini thru-hike. Despite walking 42 miles yesterday I feel fresh and relaxed. My legs perform well, I have no knee pain. The hotel isn’t run down, it is the opposite. The patron tells me that I am the first one this year coming in from Hauenstein.

The record was set however by an ex-banker from London. He did Madrid – Budapest. As I am the first one in the morning for breakfast we chat a little bit. Soon we are joined by another couple. The man is dressed in typical French fashion: His T-Shirt spans over his belly in a way that it reveals a large stripe of bare skin under his belly button. If you sit like this on a park bench in Zurich you can set your clock to five minutes. Either a mobile social worker or the police will have a chat with you. It is just a way to dress. They live in Biel which is just 10 minutes by car.

They talk about the Chasseral. The patron asks me if I plan to go up there. I honestly don’t know yet. I was many times up the Chasseral as a child, one time I did it with my ex-girlfriend. They talk about the path like the Everest would be a walk to the grocery store in comparison. It apparently is incredibly steep, takes the entire day, many prefer to take the bus to a nearer location and so on. I kind of guess that the route will go up there. I am not worried. This is the Jura. The highest point is above 1650 m and not in Switzerland. I am capable of doing 50 mile-days in this landscape. 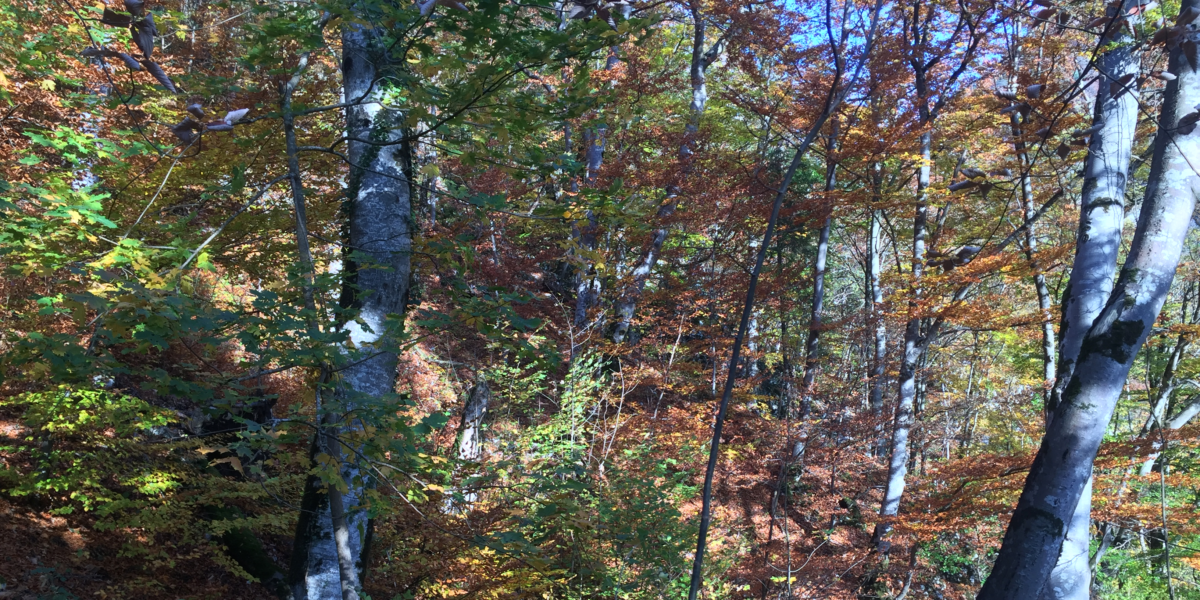 So, I start. The steep way (which the patron never did as he admitted) is just a lovely way out of the town. There are switchbacks, it never gets too steep. Like I ordered it, a Chamois does the welcome parade. It is not shy. If I would give him an apple he would even dance. 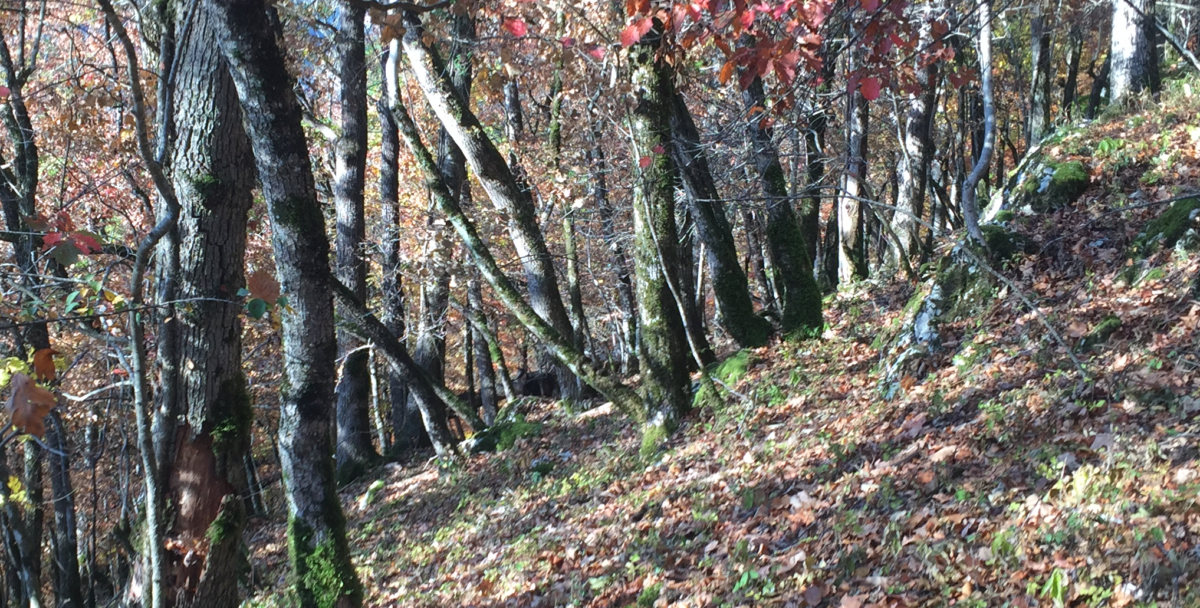 The air reminds to the Ticino. My mother grew up there and as children, when my grand-parents were still alive we often went to them. In the small town where they lived, people heated their houses with coal or wood. Soon the smell of the air changes. Now it is sulfur. I quickly find out why. It is not me who wears the same clothes as yesterday, it is industry. We are like on the crest near a canyon, the wind brings the air up to here. 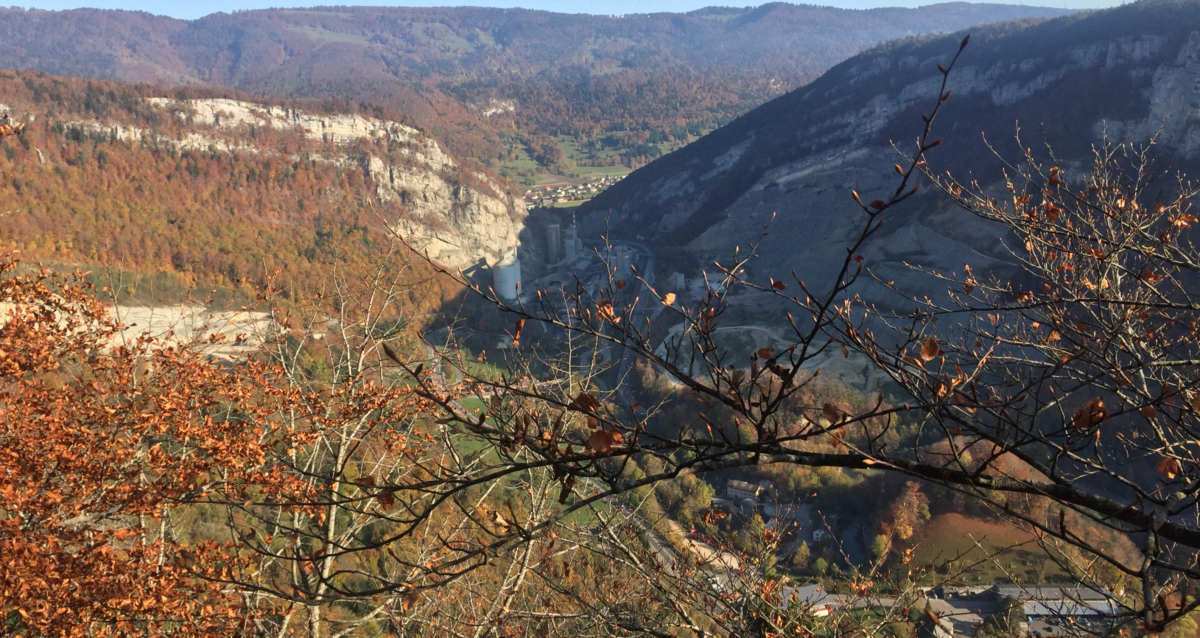 The monstrous climb they talked about in the morning is not even two miles long. I need under an hour to do it. It is smooth sailing. The forest is nicer than ever the open land just grand. As we are still in Switzerland there are cows. But they are not held in overgrazed patches like on the Rigi. In general, this hike makes me feel much happier than the tourist town trophy I did earlier this year. Everything here is more relaxed. There are dogs by the farmhouses, but they are fenced in. Sadly, I also see them chained – which is not completely forbidden but still a torment for the dog. Maybe it is because the cow season is already over that many gates are open. On the via Alpina I just had the feeling that even the marmots work in shifts to please the tourists. And that they do bodybuilding to look as fat as possible.

One problem on this hike is the sun: In the afternoon she shines in an unfavorable angle. Even with sunglasses you can’t see anything if you have to look directly in the direction. Another issue is the toilet situation. As I surf the Internet sometimes I found a solution to this problem and on this hike, I spare you the details. Planning the toilet stops on real toilets with my mileage would take longer than the hike itself. I decided to bring a long energy powder from Sponser with me, again. The idea was to get minerals, magnesium and so on from the drink. Powder is just a hassle, better are the tabs but they tend to break on long hikes. The Sponser powder does not even dissolve itself in a proper way. And it tastes awful. Never again.

I also tried freezer bag cocking. I just put cereals in a freezer bag and eat it with half a liter of water. Works fantastic. Normally the amount of breakfast cereals would give me diarrhea, but it seems that when hiking the entire day, you could just eat what you want. The water situation remains sketchy as many fountains are dried out. I recommend carrying two liters of water. A water filter is also not a bad idea unless you have no problems with cow byproducts. 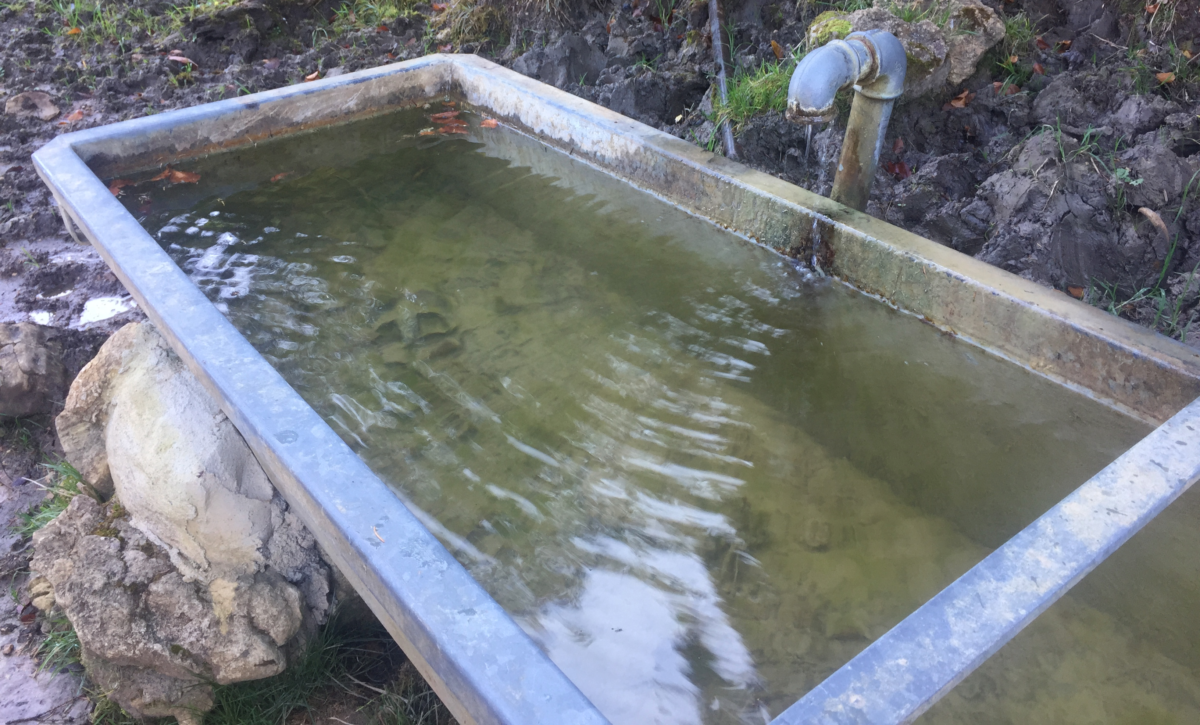 As I approach the Chasseral the tourists move in. There are car parking lots. And mountain bikers who spend more time in front of brewed stuff than in the saddle. Some I overtake, others have their dampers looked for going down. I pass a woman who uses pools but who seems to slip with them. I approach her and ask her why she hikes with the rubber caps on her poles in this terrain. She says that she needs other poles, as these ones are made for the city. I explain her how to remove the rubber caps.

Soon I am on the Chasseral. I see two trail runners. I am not the only one doing some kind of sport! On the peak people do all kind of things. There is an amateur radio operator, others fly their drone, most people drink beer. Just chilling with a view. 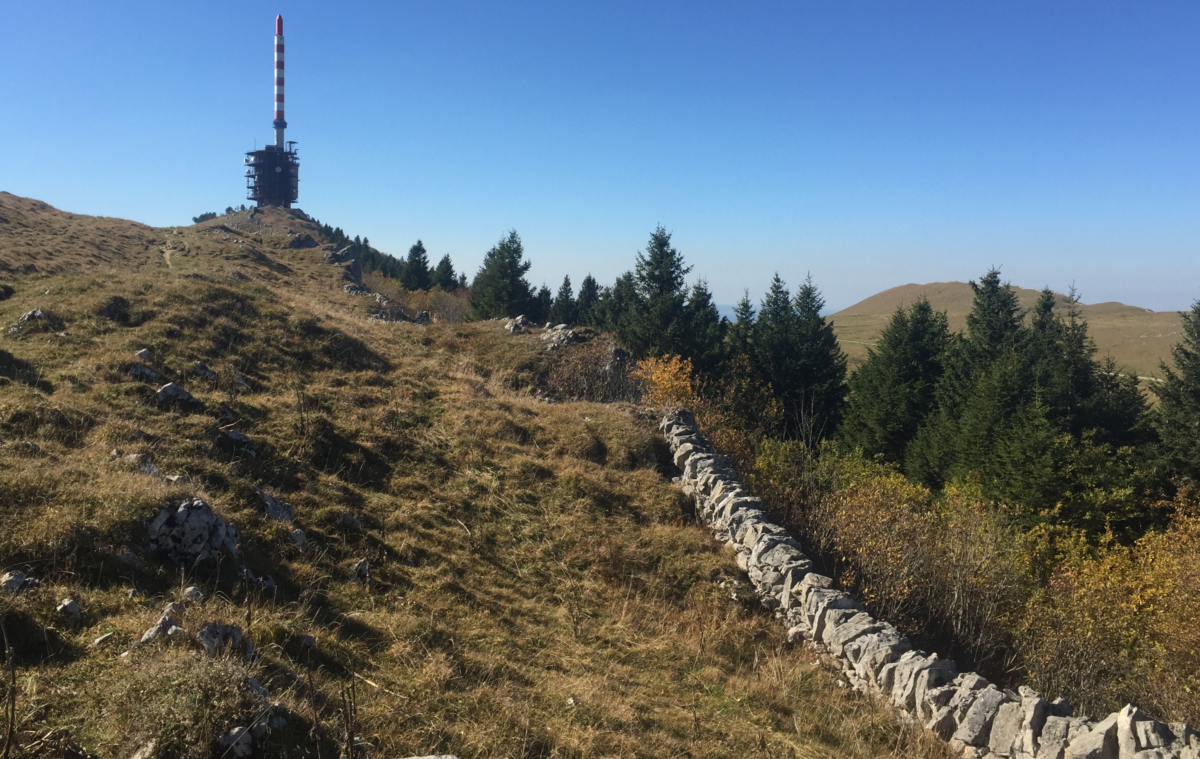 Everybody wears leather boots. Except me. And I am much faster than everybody else. And I am not done yet. Unfortunately, I lose the way and I loop as there is no network for shoveling the maps. You could store the maps in advance, but I am lazy.

Two older men approach me. “Est-ce que vous avez l’altitude ?” – Probably, except that I don’t care. As the network is back, I show him where we are, and he can roughly guestimate. He wants to begin a discussion with me and says to his friend: “Regard Jean-Pierre, il a la carte pédestre”. Yeah, a map of the French coast line would also be nice out here, or one of the Nullarbor plain. He shows me his pocket knife with built in altimeter. Than they want to know what my device is. It is an IPhone and enough is enough. Bonne journé and I am away. Fast. 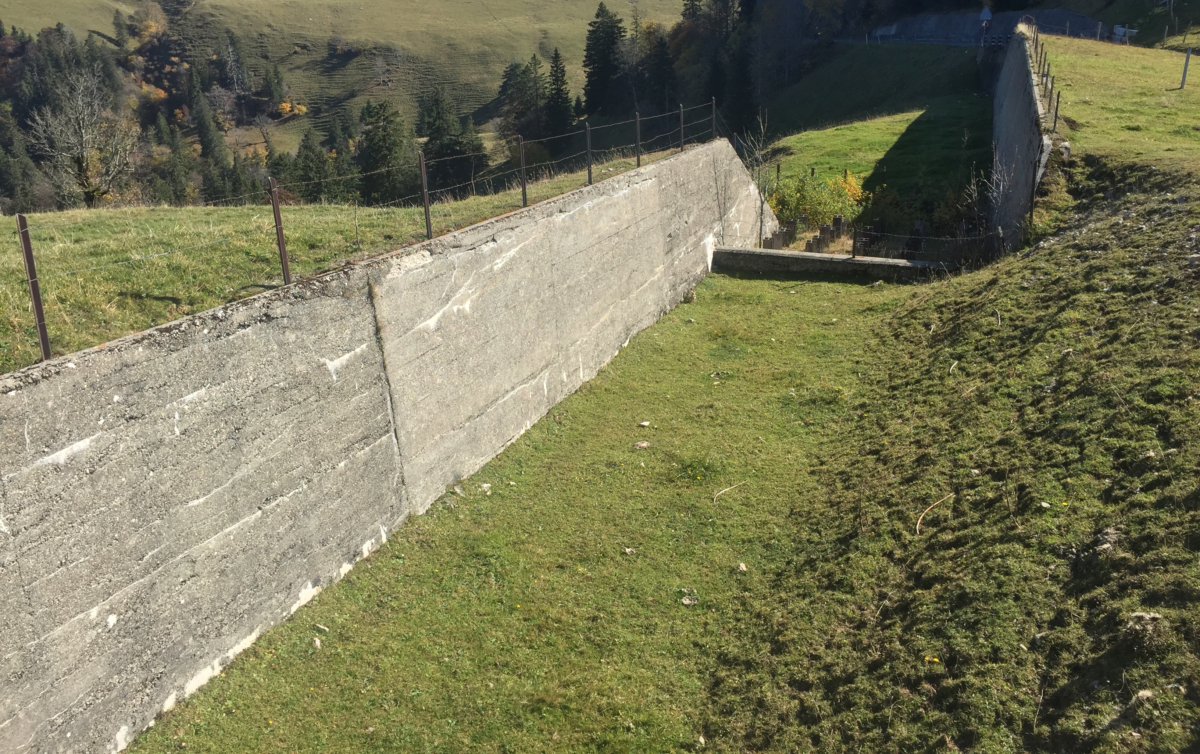 This ditch is not for the water…

I have to cross another canyon. It is of eye-watering beauty. 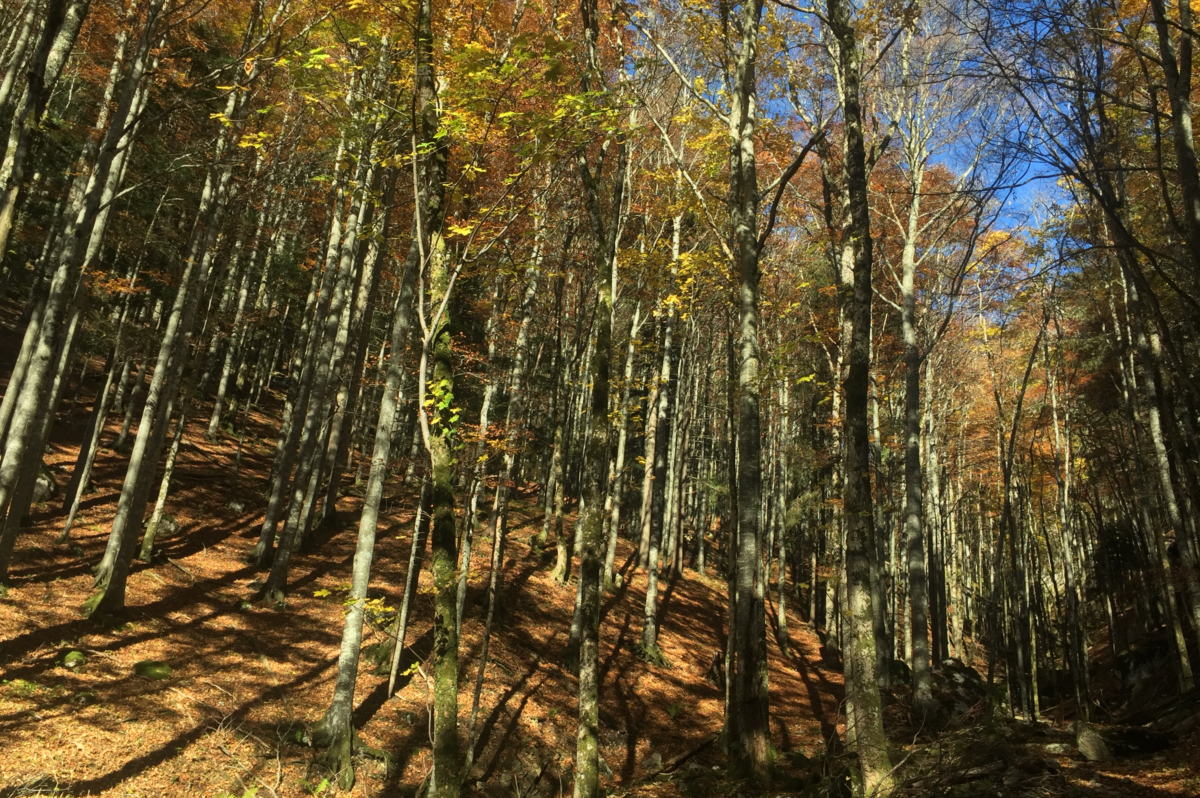 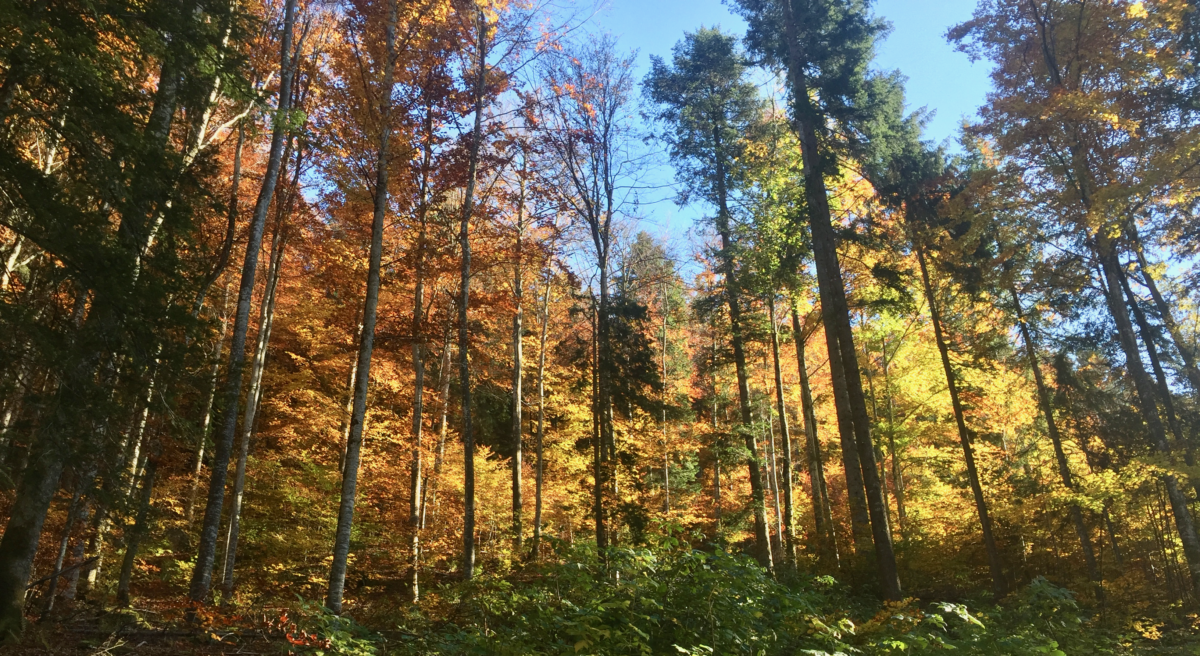 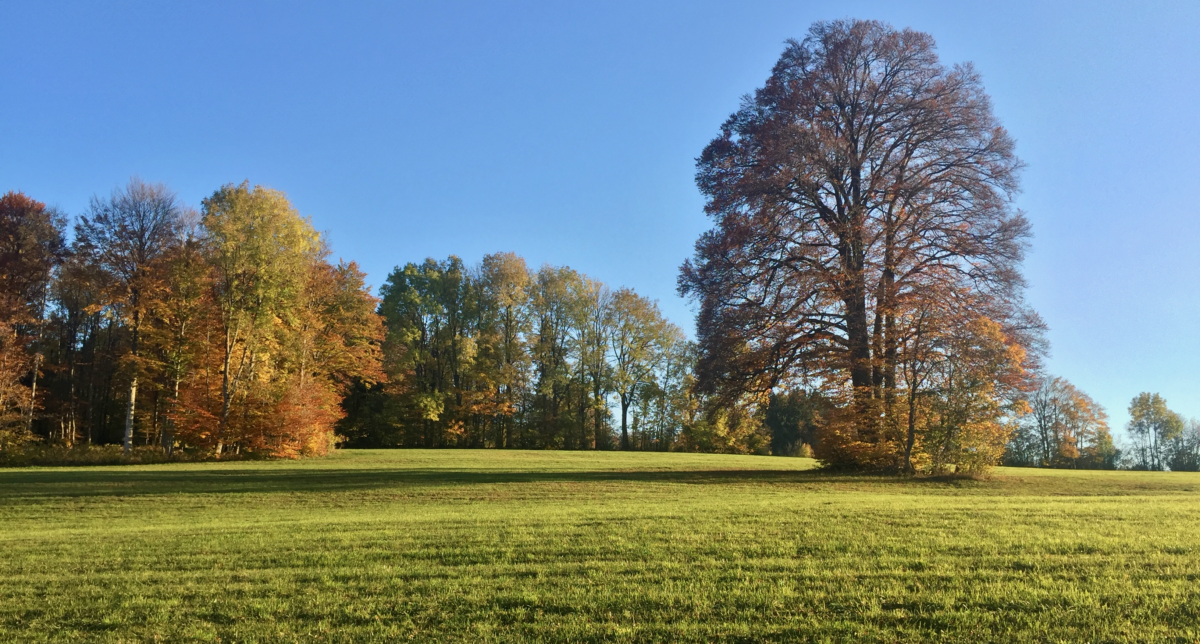 Scenery like this you see all the time – in fall

On the other side I pass a farm, where they have a tap with the sign “Eau”. The dog is on the chain. As usual I am out of water. As I fill my bottles the farmer approaches me. He is obviously an alcoholic. He warns me from the incoming night. I show him my headlamps and tell him not to worry. 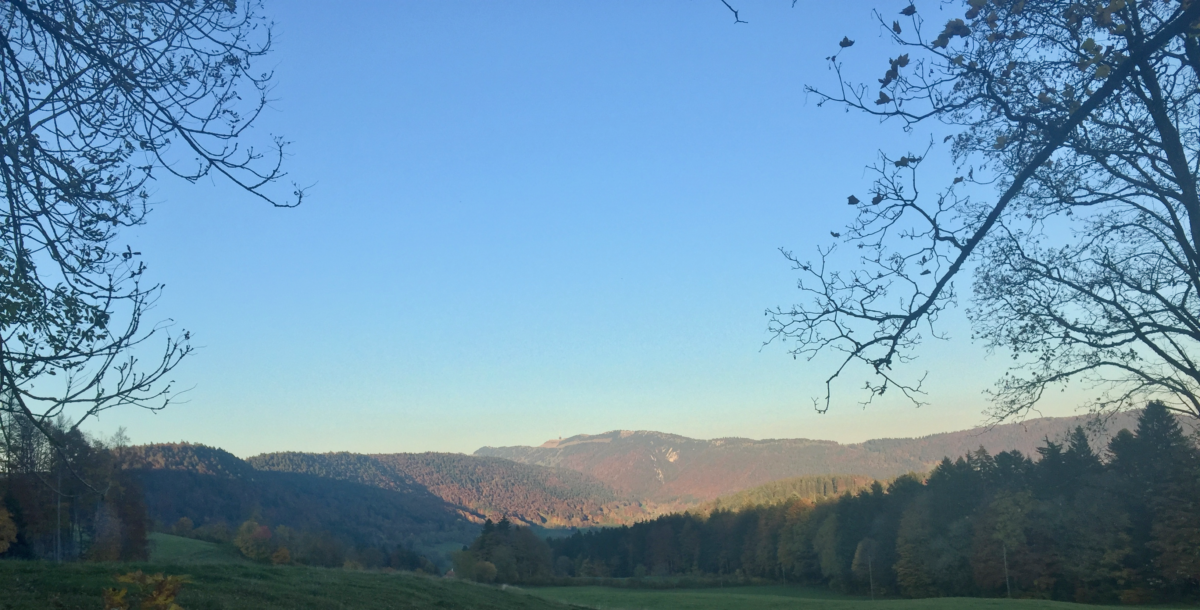 Another ramp, another hour of night hiking, another pair of eyes that seem to follow me in the distance. A night vision device would not be bad. I need to know what follows me.

The name “vue des alpes” in Switzerland everybody knows. It is a mountain pass with a street. In winter they often announce in the radio that there is snow. The hotel on top of it is a major tourist trap. I am forced to sleep there never the less.

At least it will not be boring during the night…