Hiking or running was long overdue. Last weekend I couldn’t do anything because of the weather. It had ice all over the place, just covered by a thin layer of snow. Considering how difficult it is to not fall on all my routes here even in summer weather I deemed it too dangerous.

I had worked a lot and was tired too. This weekend everything should be otherwise. I knew it had snow but what could go wrong? I packed long and heavy gaiters from a company who specializes in equipment for extremely light weight people. So, they don’t get blown away by the wind. 3 layers of gore tex. Iron buckles, the list goes on. Plus, traction devices or micro crampons. 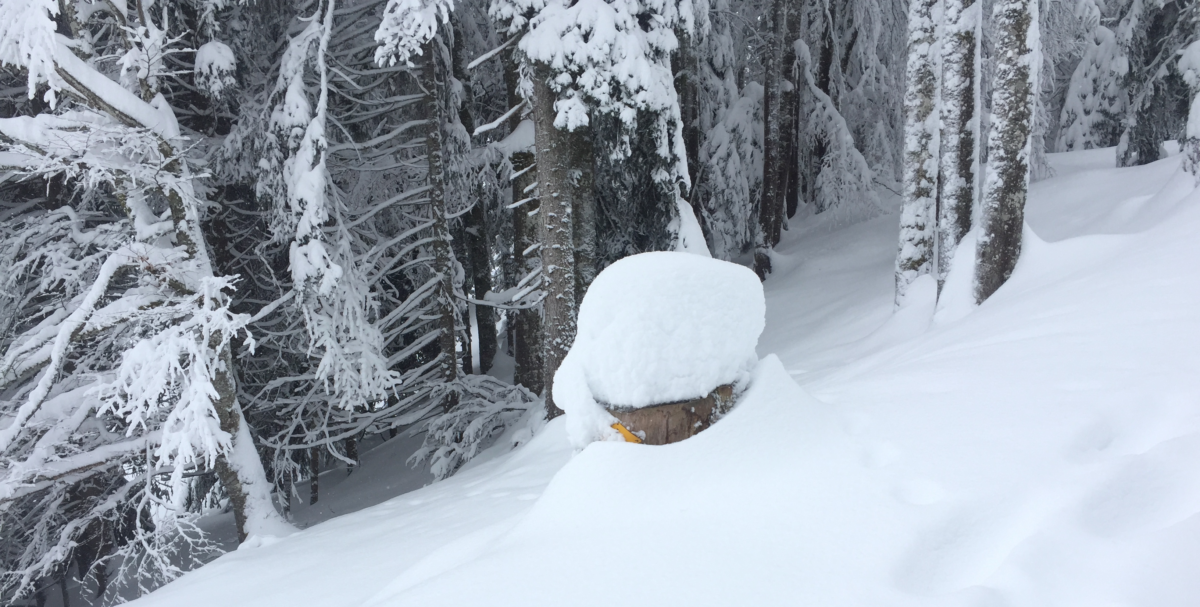 On Saturday I took the train on 5:18 to Ste-Croix. Everything went well, I reached Ste-Croix at half past eight. And it had snow. A lot of snow. Three feet of snow. I took the time to go to the trail. Traffic on the street was an impressive selection of snow plows and snow blowers. Huge snow blowers, the kind you see on the mountain passes. A snow groomer was at work. Well, I wanted to see it for myself. I take one step on the trail and I stood up to my hips in snow.

Without snow shoes I can’t hike this weekend. So, it’s back to the train and back down to Yverdon where an outfitter is neatly located just near the train station. They have an impressive selection of TSL snowshoes. I explain to the sales person that I need snow shoes for walking fast and somehow far. Little do I know about the hassle of walking with snow shoes. In my entire life I just once had the pleasure to do a little walk with snow shoes. It was with members of the city parliament of Zurich and we didn’t go far.

I always found it odd. Last year I followed snow shoe tracks for hours just with trail runners. Earning angry looks at me from all the snow shoe people I easily overtook. “Alors il faut quell-que choose de bien”? I answer with yes. Let me put it in a diplomatic way: A made in France badge and carbon fiber reinforcements in general are no guarantee for a low price. I feel a little bit guilty as I don’t earn what I should at the moment. They cost me more than 10 hours of work.

But I have no choice. Either it is snow shoes or going home again. “ça c’est pour faire des courses.” Racing in snow shoes? I’m not really sure. They have iron blades in order to provide grip on ice. And I will need a lot of grip. Two hours later as expected I am on the trail again. There are no tracks. It is incredibly hard to walk. With every step I sink in more than one feet. It means that I have to use much more force even to lift my feet. At least the snow shoes were easy to adjust and they themselves do not hurt or put pressure somewhere.

The snow is just half a meter of powder. And no one took this route before. The weather isn’t great. There is no sun, but we are in Switzerland. There are tank barriers all over the place and huge bunkers. Never used, useless from before the concrete dried (in no theater during the entire world war II an army was able to hold ground because of bunkers). Impossible to get rid of it now. There are so many that it is impossible to not notice them. The signs on the trail are all frozen over. I can’t knock the ice from them. 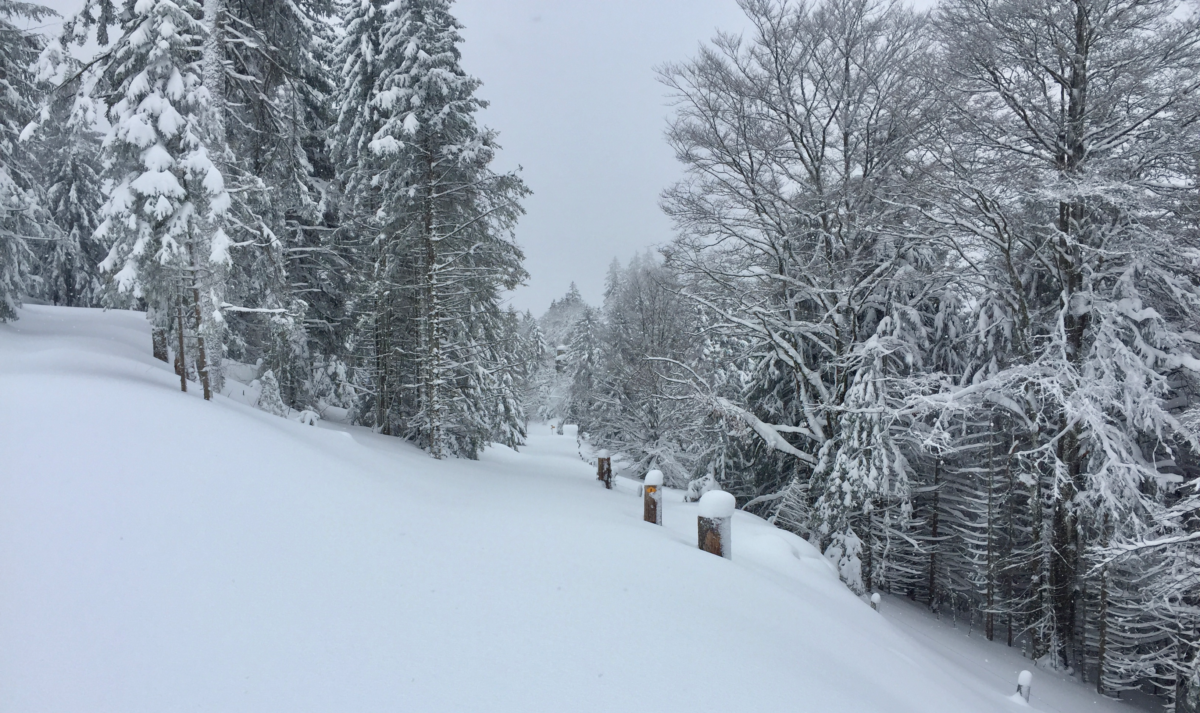 And I move slow. One sign in the beginning is ice free and it says that it will take you 5 hours to Vallorbe. My normal speed is at least as double as fast as written on the signs. In snow free condition I could be in Vallorbe in just 2 hours. In the end I need more than 9 hours. It is just crazy. The landscape is nice but in open terrain there is a cold wind. No animals at all, not even tracks. There is just too much snow, I think the animals went down to a lower altitude. At least I am not cold. When I want to stop I have to create a platform in the snow before. Otherwise everything drowns in the snow.

I have no waterproof shoes. Nevertheless, my toes don’t go cold during the first four hours. Afterwards I pack them in Zip lock bags. Problem solved. And then I can follow some ski tracks. I really hope that the skier knew what he did. As we have to cross some rocks. She or he even provided switchbacks. Every time she or he switched I have to guess where she put the skis. Or I sink in to the hips. The terrain is now really steep. I slide and sink at the same time.

Walking along an inclined slope with snow shoes is terrible. You have much more forces that pull sideways. The ski tracks disappear instead the skier has hacked in footsteps. So, it’s time to get rid of the snow shoes and mount the traction devices. I reach the peak of Le Suchet in darkness. It snows, and it is foggy. I can’t see six feet in front of me.

My phone dies in the cold but this doesn’t bother me as I experienced it before. Just put it on the inside of your jacket and connect it to an external battery. It will wake up quickly. However, I loop during the time my phone needs to wake up again. After that I do position checks every five minutes. I follow the wind direction and the curves in the snow to hold my direction. After walking through the darkness for three more hours I reach a street and after 1 hour of road walking I am in Vallorbe.

I did choose Vallorbe because I thought there would be a hotel room. I find a hotel, but they are shut down for the low season. I walk through the town and find all kinds of shady bars and stuff. I ask in a restaurant. No rooms in the entire town.

So, I take the train down to Lausanne. In Lausanne it’s the old game: Everybody has the reception closed. After 40 minutes of searching for a decently run-down hotel, I find one. They charge 100 bucks, but it is near the train station. I have to sign a letter informing me, that if I smoke, I have to pay 250 francs. I did not smoke during the last 15 years, so I figure I can do without also this night.