Via Alpina 3: Altdorf – Meiringen (and some height) 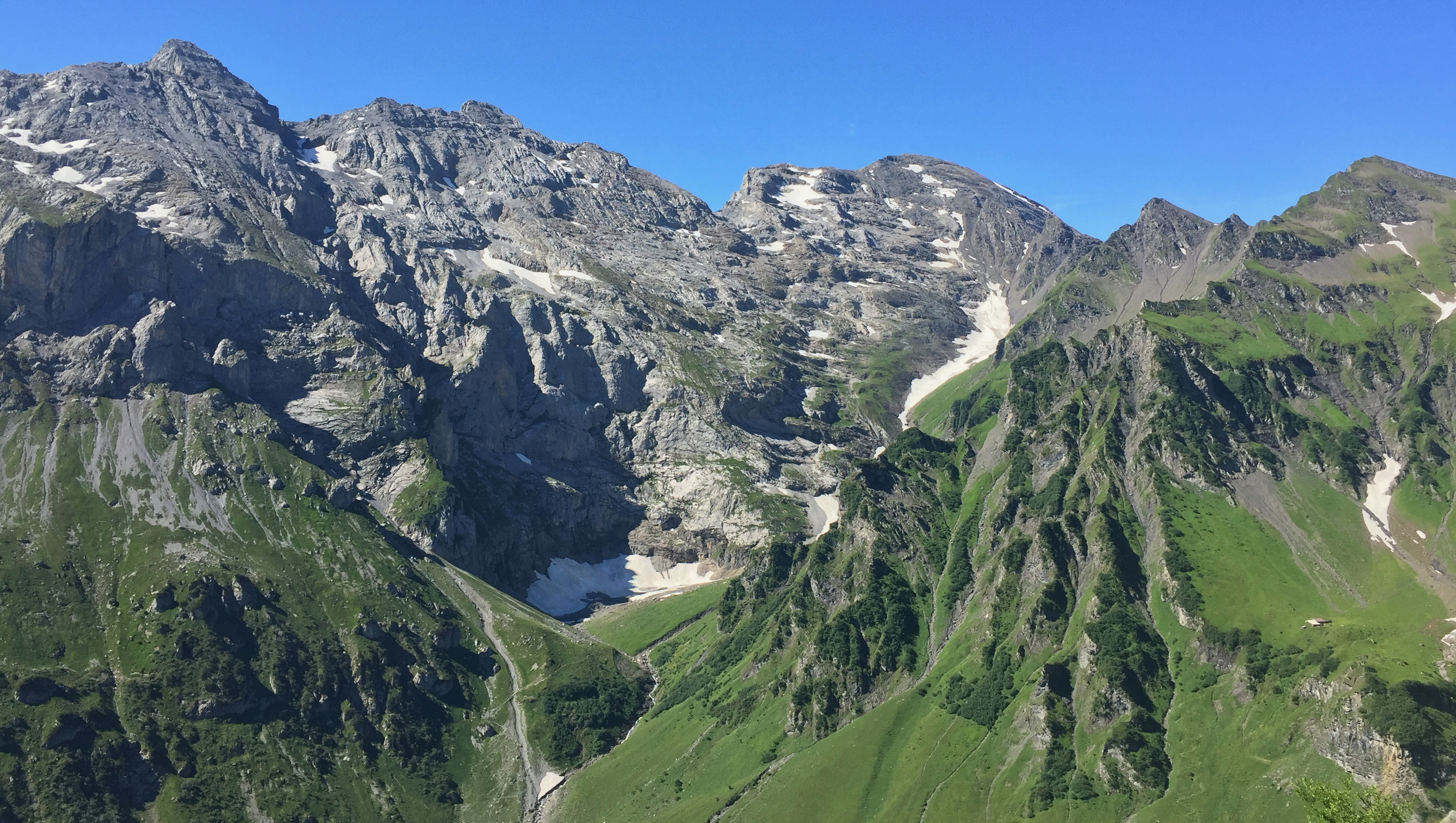 There is a problem with the planning of my sections on the Via Alpina. I need to find an access and an exit point, where public transport is available and I don’t have to pay big $ for cable cars. So, I can’t end my day in a lush mountain resort. And I can’t do the official sections because otherwise I would spent more time in the train then on the trail. This would not be efficient.

The official sections are too short. I knew that combining three official sections together is a kind of a gamble, given the height and the distance. I had a clear timeframe: The first connection from Zurich arrives in Altdorf on 7:30 (at the Tellmonument…). The last one from Meiringen leaves at 22:20. If I don’t make it to Meiringen before, I will have to sleep either somewhere in the train station or in an expensive hotel.

I didn’t book accommodation in advance because it was unclear if I could make it to somewhere. As I am extremely polite I would never do a reservation and then not show up. At the same time I am somehow ambitious and it would feel like a disgrace to call the hotel and tell them that I had to stop.

There is a warning on the official website of the Via Alpina because of snowfields. I tried to buy some lightweight crampons but nobody has ever heard of this kind of gear in Zurich. They have only real stuff to walk on glaciers. The trail running shoes I would like to try are still sold out. To order stuff from Germany is still a mayor hassle. So, I will again do my hybrid shoes, even over snowfields if necessary. Youtube is full of vlogs of people crossing the Sierras on the PCT. Some went in too early but now the situation has calmed down. They walk on snow fields without crampons for days. In the end, I also leave my Salomons with the ridiculous lugs at home.

The day before I spent on the boat on the lake. It was somehow uneasy because somebody brought some friends who had some problems with alcohol and not only without. There was even a father with his daughter who was incredibly drunken. The captain of the boat was not extremely impressed with this kind of behavior. The daughter was ashamed for her dad and asked him why he drinks so much hard alcohol. He turned to be mean to his daughter. Some of these guys are apparently no longer welcome on board.

I knew that I had to load some weight but I hardly managed to eat enough in this chaos. Then there was a party where I live. They had loud music which I actually enjoyed but it didn’t let me sleep. I was more than happy when on 4 am my alarm rang. I got up and prepared my pack, looking forward to crush some miles. In Altdorf there was only one problem: I needed to go to a bathroom but there wasn’t any. And the first mile or so was in town. Again I did something which not everybody may like. However, there was no public restroom anywhere.

As always, the Via Alpina suggest you to take cable cars, this time even 2 different ones. They even warn you about the distance, on just one of my 3 sections. Well, I am there for hiking and not for taking cable cars. The ascent from Atinghausen up to Brüsti is not something for the faint hearted. It is basically a steep stairway of 3 miles. Once I turn around and sure enough somebody tries to catch me. Thank you, I climb just a little bit faster and he soon gives up. Because I sweat really hard, the sweat rinses my shades. 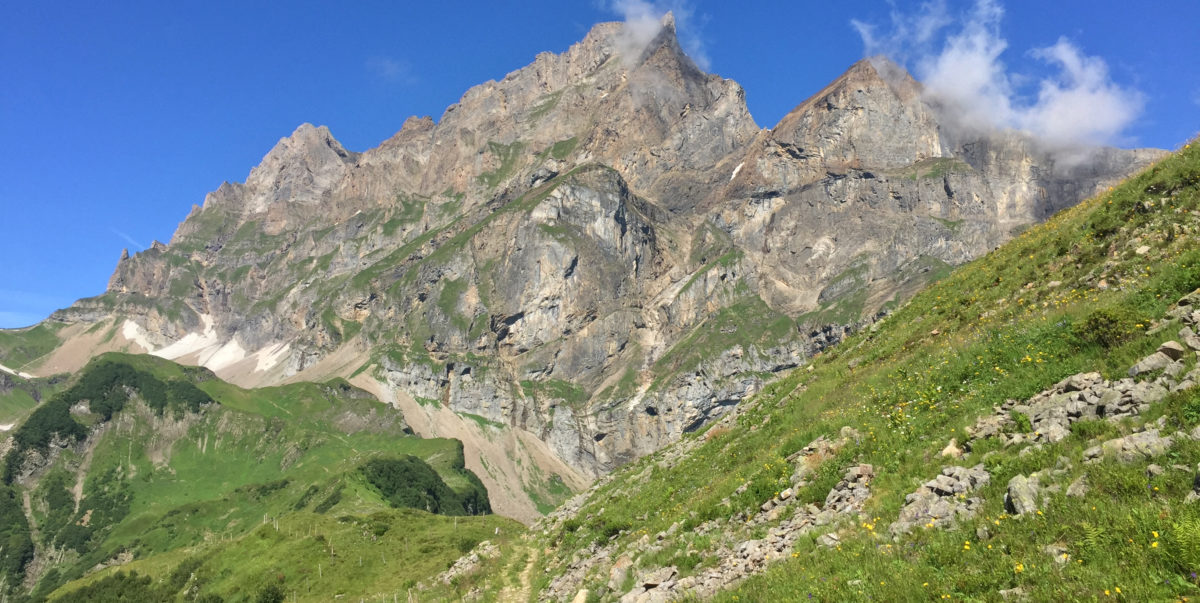 Before the Surenenpass (the pass is on the left)

Note to myself: Try contact lenses. It would also allow for fancier shades. For now I have to get rid of my shades for some time because they are full of sweat and I can’t see anything. As my shades have prescription glasses, it’s hard to see the world. Soon the climb is over and I am greeted by a poster against the wolves. You know what? I also would like to live in constant holidays with a self-replenish bank account. These shepherds get their payment from public funding. I hope that the next wolf bytes them in the private parts. There must be place for the wolves and these shepherds. We have enough money in Switzerland to organize a sheep watch for every sheep individually. And enough vegan people to teach every wolf, also individually, how to eat vegan, to stay healthy and so on.

I soon overpass everybody in front of me and then I stand in front of the first snow field. It is flat, which is good, because you can’t slide anywhere. The snow is firm but not frozen. On top of the Surenenpass there are quite some people. The pass itself is in use since roman times. In 1275 there was a judgement because of the borders. They settled this question in 1609, after some violent skirmishes. In 1799 a French army expedition force crossed the pass with artillery in order to fight the Austrians.

View in direction of Engelberg from the Surenenpass

I just take some pictures and start the descent. The path down to Engelberg is somehow boring. There are a lot of tourists, which I have to overpass. It is what people would call a connection section. They have all kind of amenities in Engelberg, a five star hotel is under construction. There is an openair theatre where they play Winnetou. Time to climb out of Engelberg. I get water from the bathroom at the railway station and put in my long energy drink powder.

From Altdorf to Engelberg I didn’t eat one bite (although they claim that it will take you 9 hours). So I eat a powerbar and a gel. I knocked down the marathon distance already. What can go wrong? I have to follow a cable car up to a station of the Titlisbahn. There are all kinds of Tourists there, women in scarfs and so on. The last station however isn’t so exiting today as nothing is visible because of the clouds (and from my vantage point not even the highest station).

Soon enough I reach the Jochpass. There is a sign, Meiringen 5 hours. Perfect, I am within reach as it is 5 pm. I allow myself a big beer on the Engstlenalp. There is a sign Meiringen 4 h. And there is a sign pointing in another direction with the 1 on it. The 1 stands for the Via Alpina. I am still faster than the signs, even after 40 miles.

Although I nearly catch a biker (this poor fellow has never heard something about saddle height) the climb gets more and more daunting. I like the next Alp more than the Engstlenalp. The alp houses are the same however, often the cows are cramped under the same roof as the flat for the people. New barns have to be bigger, because when these barns were constructed, the cows were also smaller.

Clouds move in. I believe there is no rain or thunderstorms but the clouds are somehow darker than I would like them to be. I am still on 2300 m or 7545 ft of height. Meiringen is on 595 m. The next sign says Meiringen 5 h. It is 7 pm, I have only 3 hours left. I think I am somehow in trouble. So, I do mountain running. I have to take care to not hunt the sheep to much. They run in pairs on a narrow path. I try to talk to them. They finally leave the path on the right side, so I can run faster. Not much faster I am in climbing. I use the poles mainly for balancing reasons as I can’t push myself upwards as it was the case 10 hours ago. 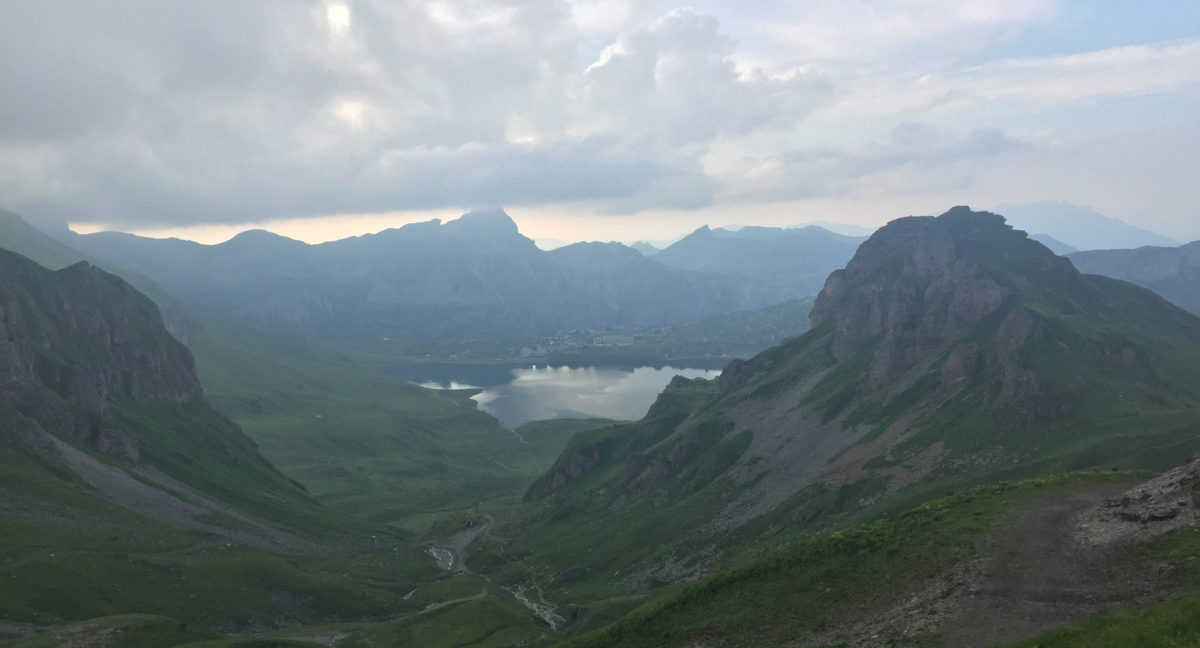 I reach Planplatten on 8 pm, after some difficulties in choosing the way down. Planplatten is on 2233 m. The run down is somehow something I would not recommend to unexperienced people. It is all about balance and pole technique. I know that I will never role my ankle. Hoka One One shoes are about maximum cushioning. Something that helps at this stage of the race. And I never fall, something that helps as well.

I don’t have enough water, therefore my body tends to get warmer than I like. I have to rely on cow fountains near the way. If the water wouldn’t be drinkable they would have to write it on a sign, given the high number of tourists that pass here. Thankfully I somehow manage to get to Reuti in just one hour. Another half hour later I am in Meiringen.

Next time I will go from Meiringen to Lauterbrunnen. Half of the distance and less height.