I leave my cozy room before 6 in the morning. There is a lot to do before I can head out. Prepare new drink mixes, organize food and my pack, check out the weather and so on. I am happy to leave Sörenberg. I think about the couple, who, together with me, were nearly the only guests in the hotel restaurant the evening before.

They were geo-catchers and they have now found every cache in Sörenberg. So, they didn’t know what to do next. The climb out of Sörenberg is no big deal but it is cold in the morning. Nevertheless, I got rid of my jacket after 10 minutes.

Sörenberg is part of the UNESCO World Heritage Biosphere Reserve Entlebuch. However, all I can see are fertilized cow patches and heavy erosion because of the cows. There are no cows yet, so the landscape looks somehow post- apocalyptic.

There is wind and a road. On a small parking space, the farming family has put up some advertisement for them self. I am not so sure. At the moment the farmers rely on subsidies from the government but with every can of milk they produce, their income increases. Working as a farmer in the alps is an incredibly hard job and I think it would be beneficiary for everybody, if there would be a mechanism to take away the pressure to produce as much as possible.

They are paid by the government anyways, why can they not be paid to take care of their land without turning it into a moon-landscape? This alp is even somehow trashy. On the access road there is old plastic foil everywhere, I even spot an old car tire. 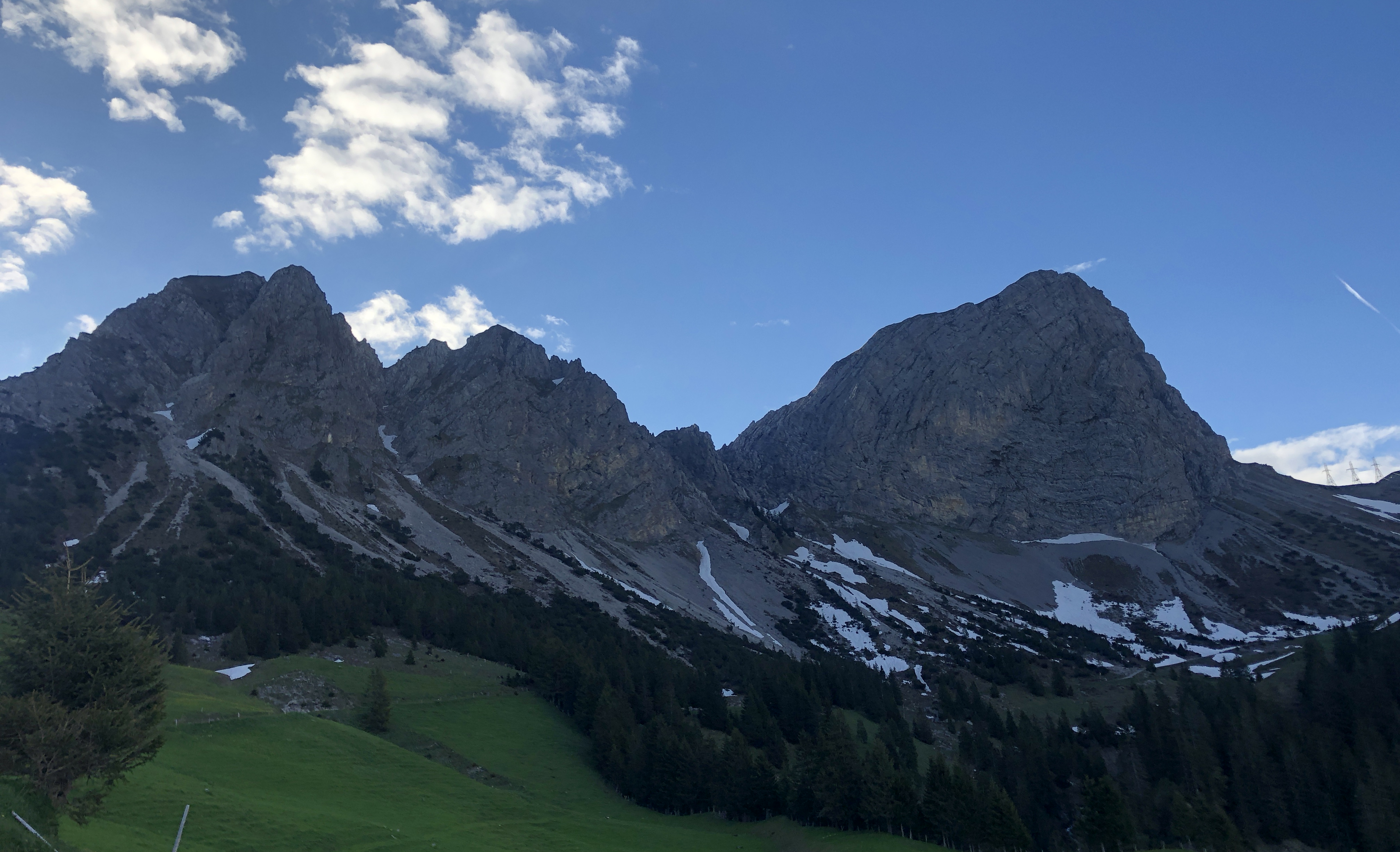 Mountains in the shadow, passed left of them

I go over a kind of height and begin the decent to Lake Sarnen. I spot entire herds of chamois and I wait a little bit to give them room to move. Those above me just look at me, knowing there is no way I could reach them. I am busy enough navigating around cow swamps. 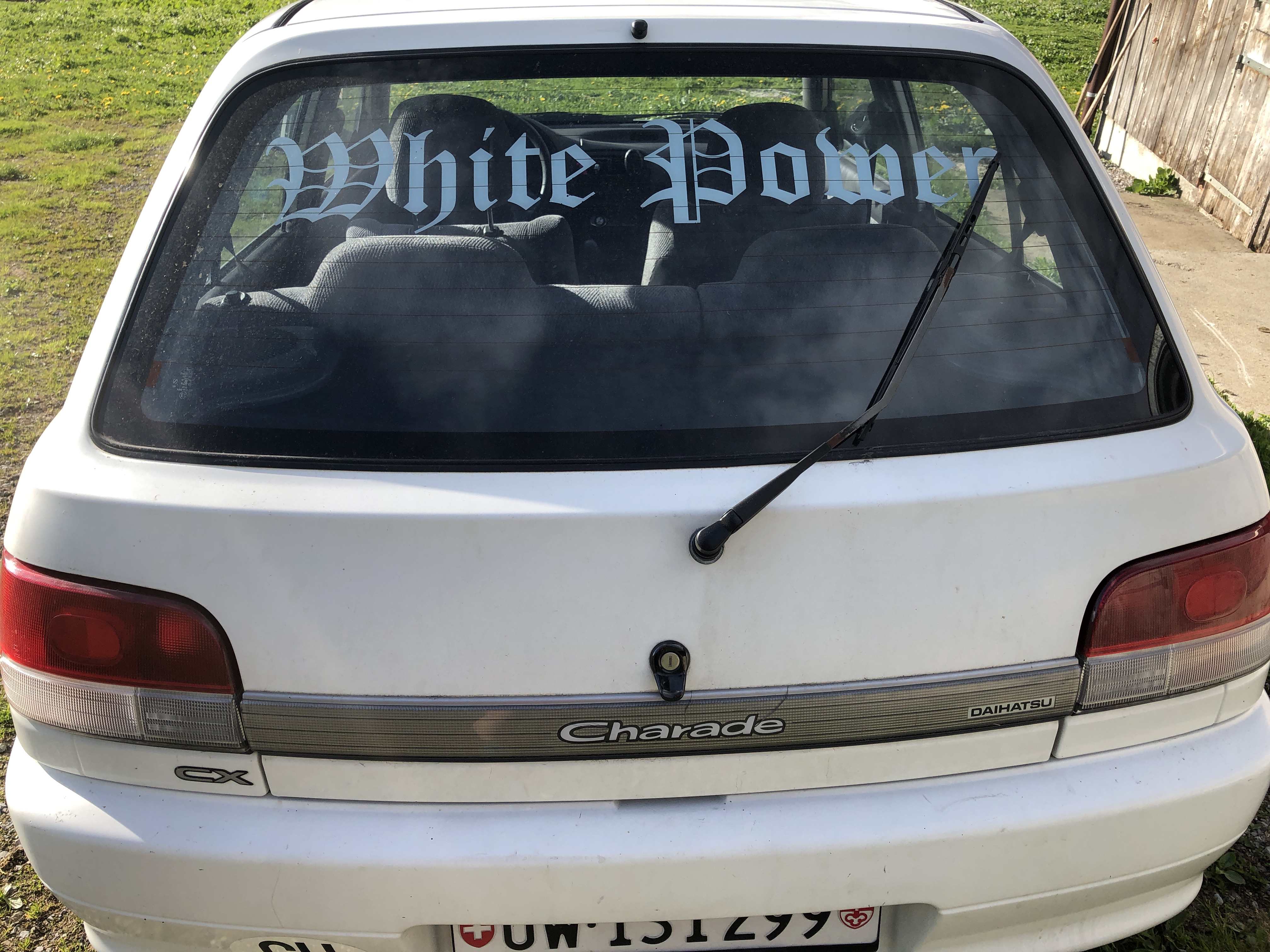 Since the car is white, this could also be a statement about the car, right?

Then there is this ski station with a car. “White power” is written in big letters on the hatch back. It belongs to a Dave. The letters are gothic. It makes me angry. There is no one around which is maybe better. There are fixed snow canons for the winter and even huge lights, so they can illuminate the ski run in the night. Apparently, that doesn’t disturb somebody while there is a debate about sporty activities during the night – it may stress out the wildlife. Like, you should not litter,  unless you are the army.

My mood was somehow better earlier in the morning. It is time to eat breakfast. I find a nice opening in the forest with a big boulder who will serve as a table. No one is around, and I wonder if there are animals in this forest and even if maybe something shows up on this opening while I am here? Sure enough, a single chamois comes out to graze. I am able to convince him that I am no threat, so we both eat not even 30 meters away from each other.

The path is poorly maintained, there are deep holes in it. The hole descent is long finally I reach the town of Giswil. That’s where Ruedi Rymann lived, the famous songwriter who won the title for the biggest Swiss hit with the song Schacher Seppeli (although he didn’t wrote it). The town is like frozen in time. The photo store still advertises Kodak films. 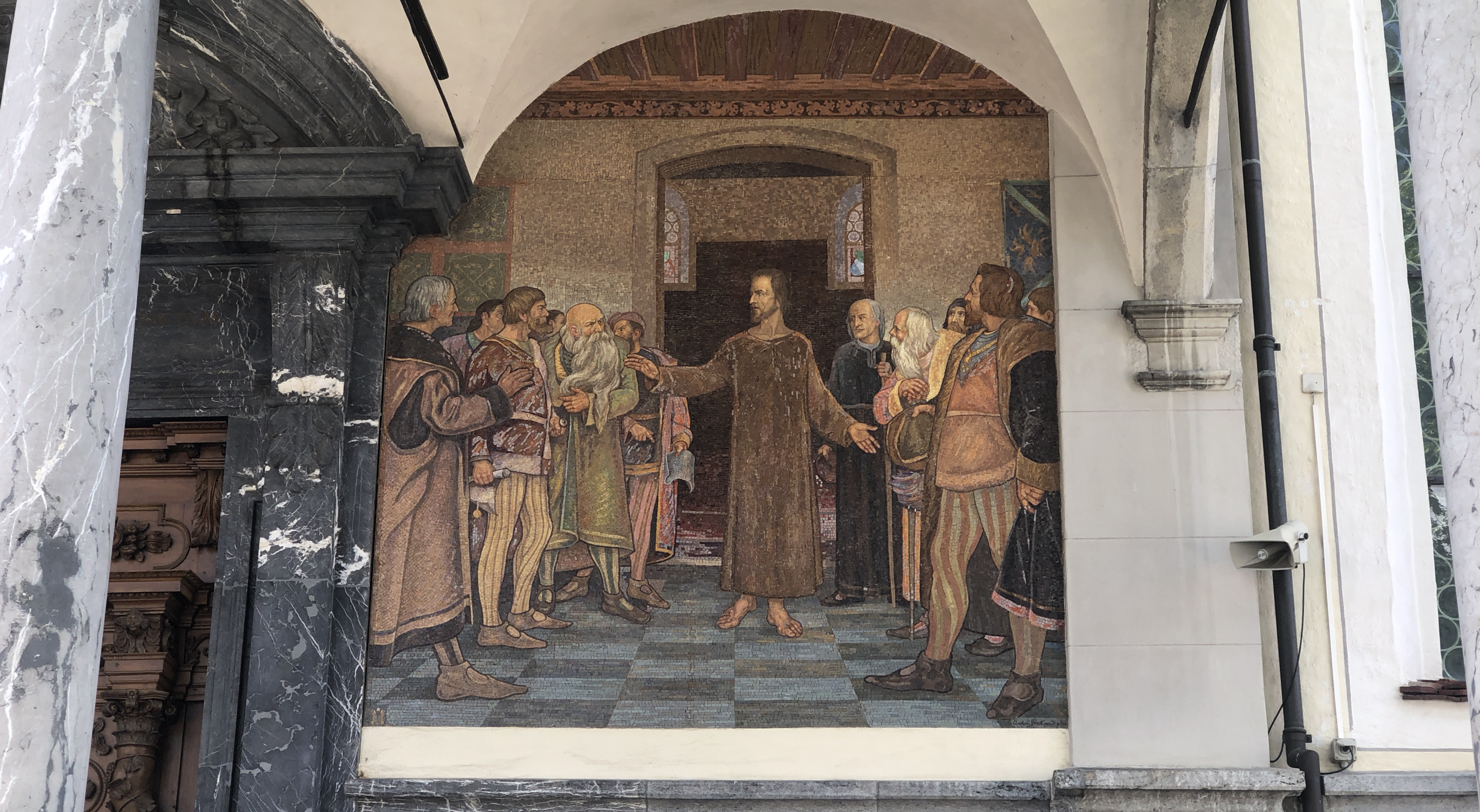 And it gets even better. The marked TST now follows the Brother Klaus path. Mr Klaus lived in the 14th century and is the biggest hero of Switzerland (who is actually historically verified, with Mr Tell historians are not so sure, if he was actually a real person) . Mr Klaus is officially a saint of the roman catholic church. My grandmother insisted that we are descendants from Mr Klaus when she was still alive. Mr Klaus combined Christian (now Catholic) spirituality with political agenda setting. He saved Switzerland when more profane gentlemen (and no ladies as they had nothing to say then) didn’t find the right way and Switzerland was at the brink of imploding.

I feel emotionally touched, since I had hardly time to recover from the last emotional highlight, the royal wedding. There are souvenir stores and I pass also the church where he is buried and one of his shirts is still kept for public display. This shirt is in this church since the 16th century. I don’t venture in to the church to see it.

I think the level of cult around Mr Klaus is about right, if he really was one of my ancestors – I will never verify if he was indeed, since I don’t believe in saints,  religious freedom is freedom from religions. In Flüeli Ranft there is a huge gathering of young people every year to pray together in memory of Mr Klaus.

I seriously spot people with a Bible in their hands who pray to my alleged ancestor. At the moment however, I need more electrolyte drinks and not prayers.

However, I can grip my poles much better than earlier and my back feels strong. Maybe it has something to do with my work at the moment. I lift huge pots, easily over 30 pounds each. Together with my boss I work in a kitchen. Italian meat cuisine, go figure. For hiking, it has a lot of advantages. The air is not as fresh as expected because of forest fires? Spend some hours in my kitchen. It is hot and humid? Spend some hours in my kitchen. You spend a lot of money at the gym, because you are afraid your back may be weak otherwise? Be responsible 10 hours a day to clean everything in a restaurant with a nice professional dishwasher.  And a lot of dishes.

Farmers mounted huge paintings of Mr Klaus to their barns, I am sure their cows give more milk now.

To further advance my spiritual gains, the trail now follows the Camino (You should read the history of the Camino. Interesting is the part why they have chosen Santiago de Compostella as the terminus of a pilgrim path). The pilgrims carry huge packs with a scallop mounted on the backside. Not only have all the pilgrims such a scallop, they even have it at the same position on their pack. I only see one girl who has a metal scallop, maybe she is vegan.

Nice is something else, I think it’s fair to claim this is not the best part of the Camino. Until Sachseln, you have to follow lake Sarnen on an asphalt path, after the holiest place in Switzerland it is not better. Maybe it is to make the pilgrims suffer? There is a song from a metal band called Slayer. It is called disciple – the main message is “god hates us all”. I think they had a point.

Camino in Switzerland. Apart from the horrible surface it could still be worse. They could use barbed wire and put the fencing closer together – this would be matching to Mr Klaus suggestions.

I think about a woman with the trail name Ice, she was on the Camino in Spain but did not like it according to her Instagram. She is a serious long-distance hiker, familiar with the trails in the US. She should do the Camino in Switzerland I think, afterwards even thinking about hiking would make her puke.

I walk on asphalt for hours but before somebody in St. Niklausen, the next town to Ranft in true spirit of peace and friendship has taken down the signalization of the TST and rerouted it, partially of course, so you have to find the route yourself. A farmer apparently doesn’t want people to cross his patches when his cows are out. Thousands of other farmers manage to just fence in a small pathway for hikers, but we are in a special place here.

Of course the chapels have murals with the founding scene of Switzerland depicted and the local memorial for active service during world war II claims that Mr Klaus protected the brave troops.

Sarcasm aside, religions and the beliefs of people are abused everywhere. Just think about the perverse cowards who brought mayhem to their countries under a religious label. If you think it was because they had the wrong label, think again. Sexual misconduct is widespread in Christian churches, even in the Vatican.

Once I can spot the Titlis, where the Via Alpina leads close by. How beautiful was the Via Alpina compared to this! This trail shows you places from a distance where you rather would like to be instead. 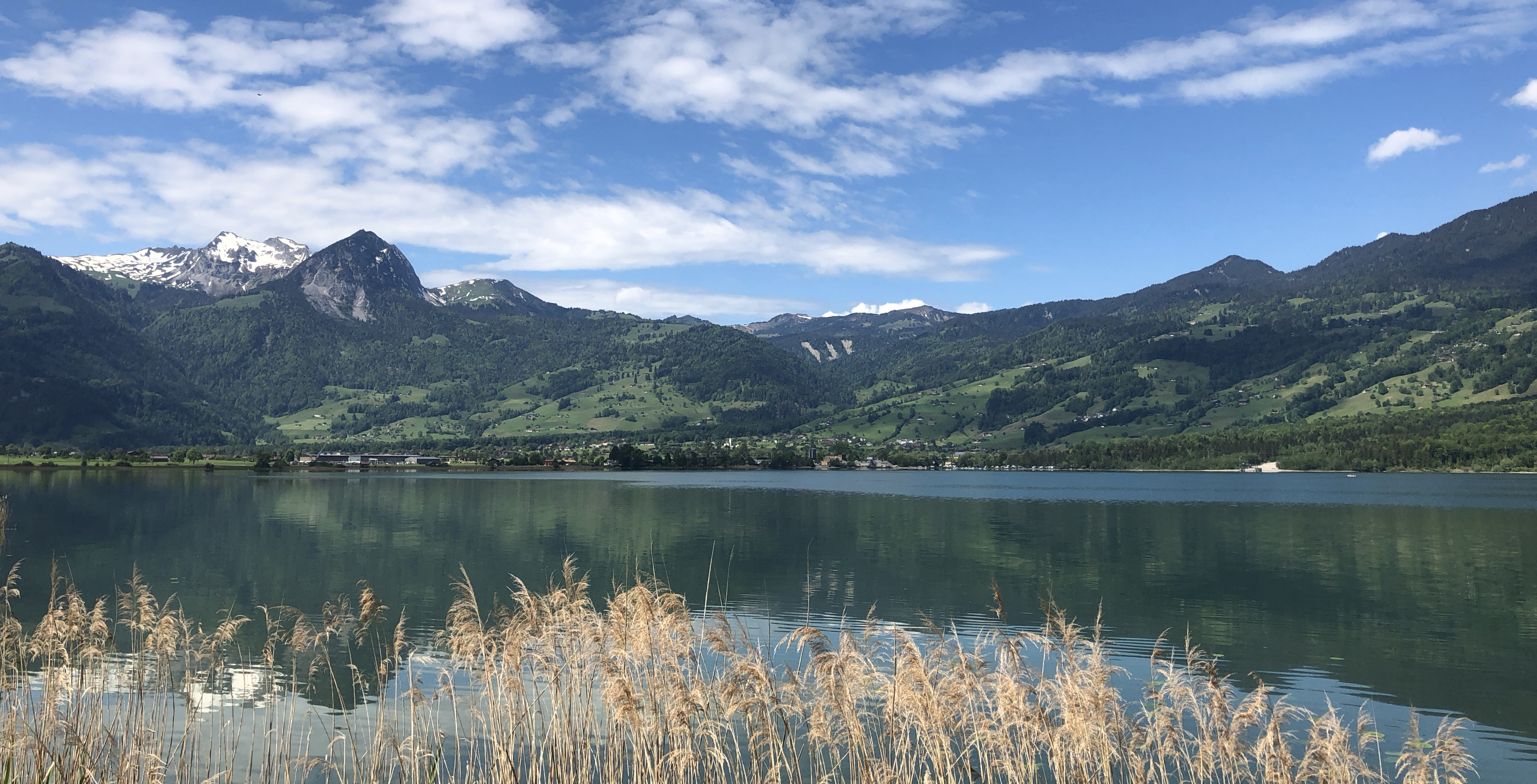 Why do we have to walk next to the lake?

Around Lake Sarnen there is a nice mountain range but the TST follows a huge road and a railway line along the lake. I absolutely love it, when the hiking path is jammed between other traffic systems, especially when you have to walk it for hours. 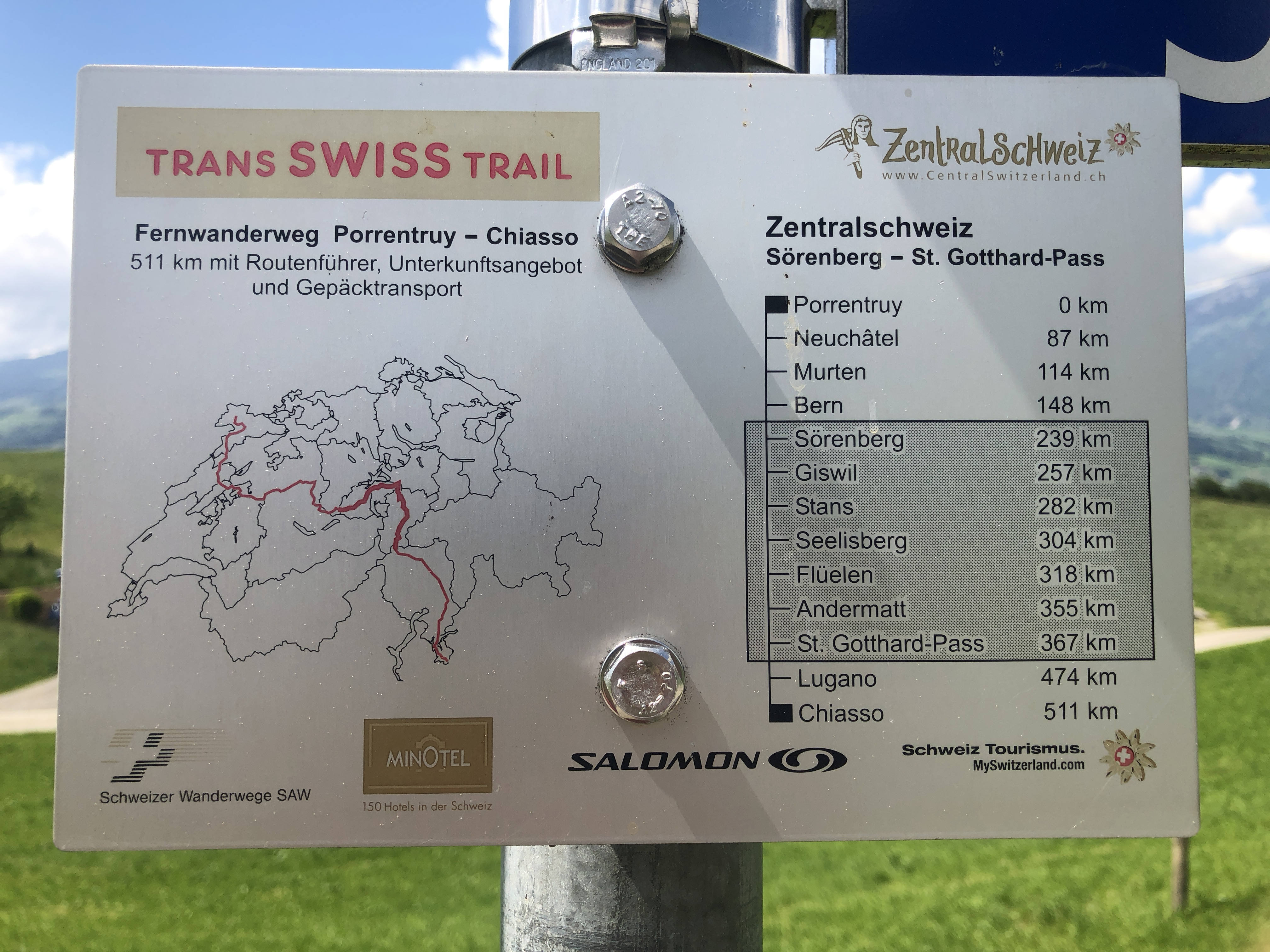 Older TST sign. I guess more people commit crimes to get a room in prison…

I get bored, so I start to picture agricultural machines. Schilter for example was made in Switzerland (Stans, where I walked through today), I somehow remember going to the woods as a very small boy to cut wood for heating our house with a Schilter. The company got bankrupt in the seventies but got a new life under the name Schiltrac – they seem to be the Aston Martins in their class, although you can also exaggerate with pointing out your Swiss heritage. 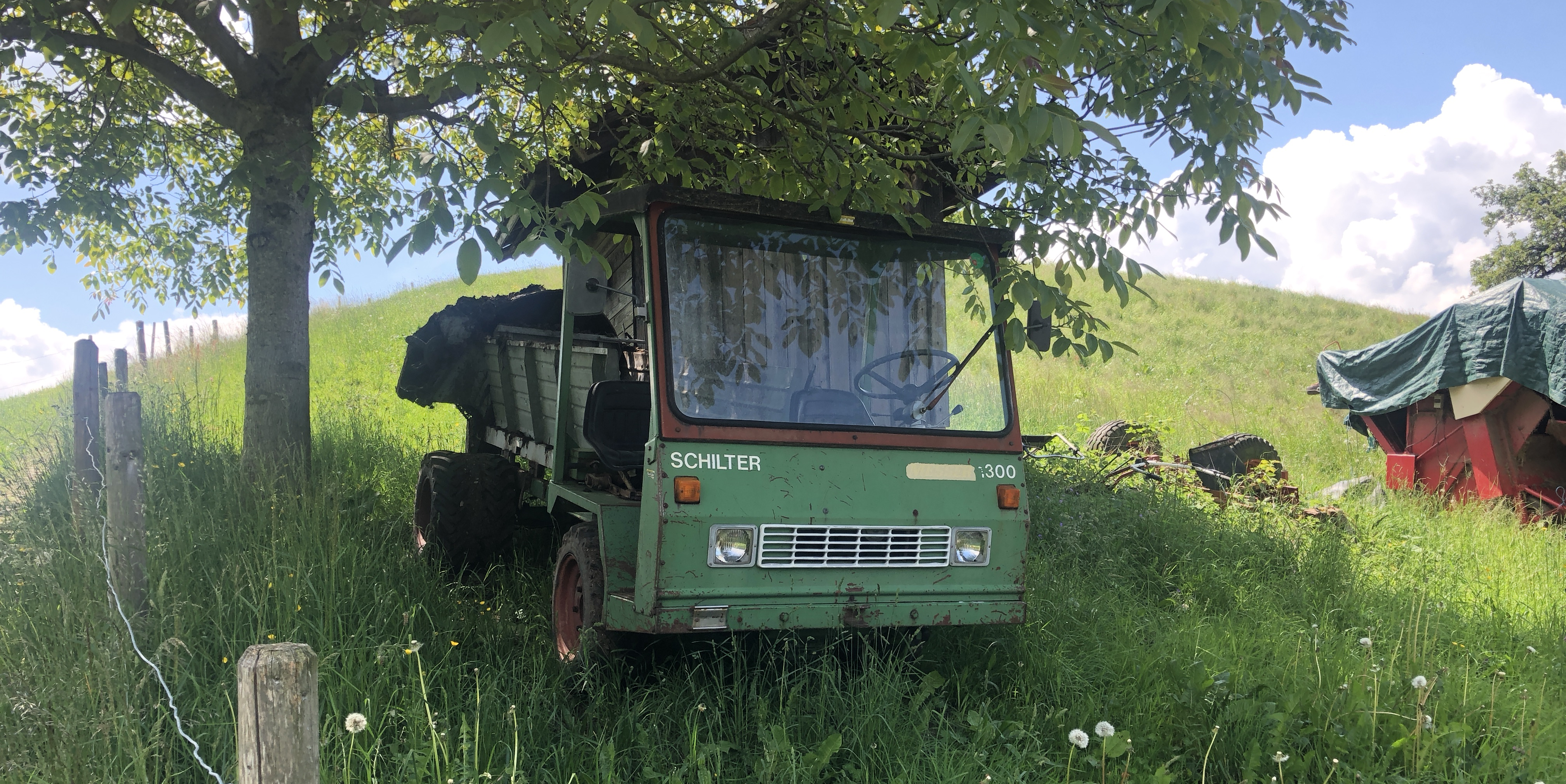 An original Schilter! Unfortunately without number plates, so his days may be counted.

Finally, I reach Beckenried and call it a day – I have to work the next day, so no overnight hiking. Before I pass Stans. I slide a lot on the muddy paths when there is a path and no asphalt and I wonder why my shoes don’t grip as expected. On closer inspection I find out that unfortunately, the profile is already gone. I used them for fast city hiking.

Next time I will hopefully reach the Gotthard pass.