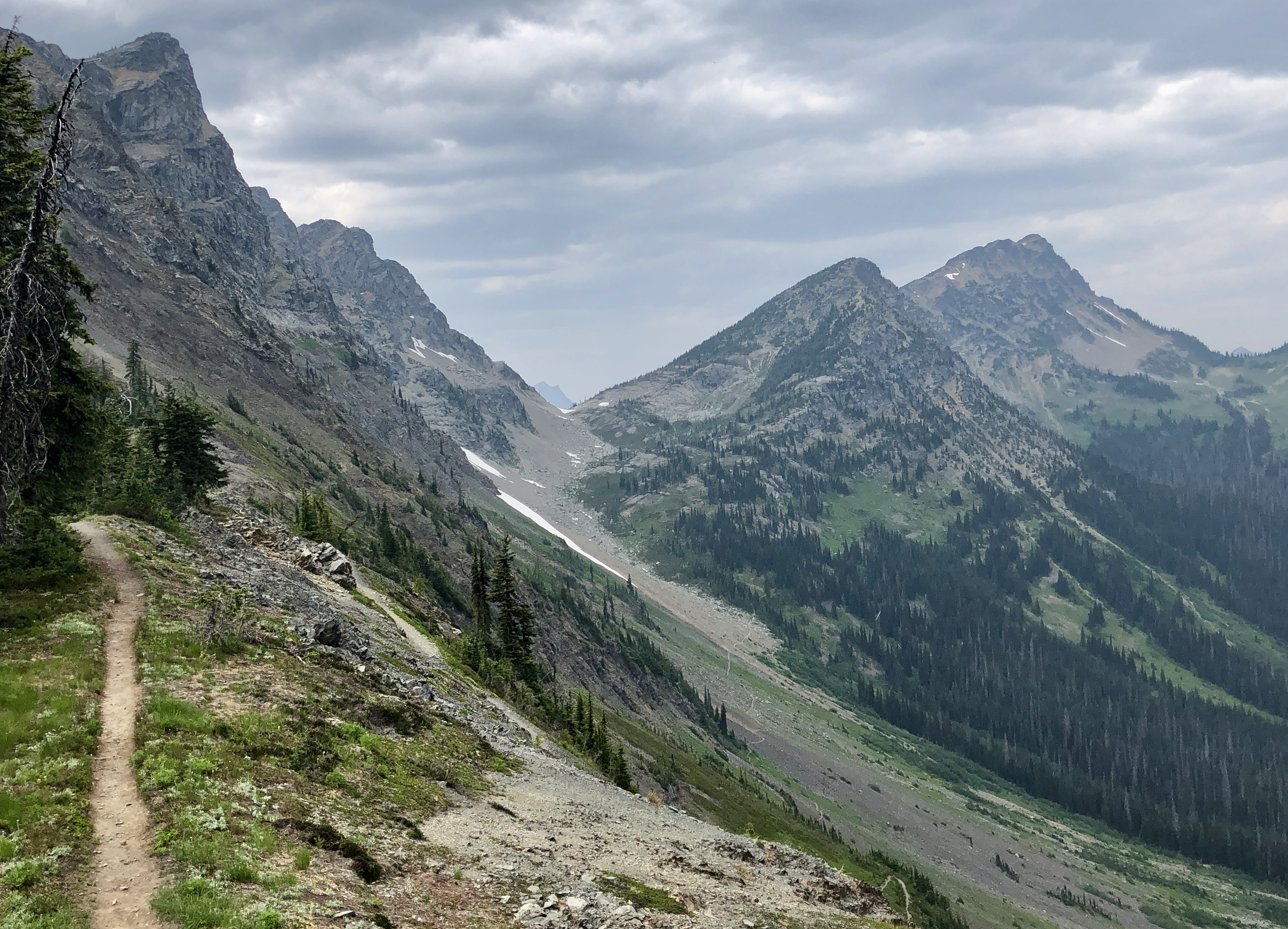 After a night in the attic of this strange hiker hut, I quickly take out my food of the fridge and walk half a mile to the access road to Harts Pass. There is no hitch, never, nothing.

As the guys predicted the night before there are campers coming down to buy grocery or refuel their cars but no one goes up again. Except a forest worker.

His car is a big Honda from the 80ies. His windshield is shattered, it has even like small bullet wholes. It reminded me to other travel I have done, where we always choose the taxis with as much bullet wholes in the windshield as possible. These drivers had more experience, until we found out that they started to shoot their windshields themselves just to get business.

The car I am riding in today is ready for the scraping yard. The shocks are long gone, theres no longer a muffler or an exhaust on the motor. Everything is old and dirty, even the glasses from the guy.

But he knows this road. He knows it extremely well. He talks with me and drives without even watching the road but he does it in race line, using the double yellow line on the road just as a marker.

He tells me, that once he saw a Wolverine, a young one. He was so in shock, that he went out to buy a .44 revolver the next day.

He didn’t tell anyone what he had seen out of fear that nobody would believe him. Of course he knows, that there are grizzly bears, as he knows several people who saw them. It seems, that by know they know, that hikers are not afraid of black bears. So they tell you to be aware of grizzlies.

He drives me to the Lost River Airport road from where I proceed walking. Not even 20 minutes in, I see a giant deer who is not interested in me. The road is in much better condition than the mountain roads in Switzerland. The warning from rock slides was pure BS. Of course there are some spots where rocks have come down from rock faces, but it is like this everywhere.

After one hour the first car passes me – it is fully occupied. I walk further up on the dirt road until a Subaru driver has a place for me. Most rides on the entire PCT I got from Subaru drivers. As soon as Subaru releases an all electric car and as soon as I have the necessary cash (probably never) I will get a Subaru.

It is really strange but as soon as I saw a Subaru coming my way when hitching, I knew that my ride had arrived.

This really turned my brand knowledge upside down – in Switzerland, Subarus are cars for mountain farmers and not really for over progressive people. I even asked a Subaru driver why it is that all Subaru drivers stop for hikers. He wasn’t a hiker at all, he and his partner just drove up Sonora pass because it was so beautiful. He said something of like minded.

Todays Subaru passengers are two couples in their fifties, they just do a day trip. As soon as I tell them that I am from Switzerland they ask me about the conscript system of our army. I don’t tell them that I spent countless hours to get rid of this in Switzerland by helping to collect signatures to have a vote about this system (we lost). They seem to be supporters of a strong army in general. They wish me good luck and I go to the trail register on harts pass. I discover a book for Grizel, an IG celebrity. She is long gone and has by now done something like 400 miles.

I want to go to the monument.

It is just 30 miles away, my legs feel fresh however, despite walking some eight miles up to the pass already. A group of women asks me things, they have never before seen hiking-poles like mine.

I start cruising. Soon I met a guy in full Zpacks battle dress. He wears a hikertrash visor and eats Fruit-rolls – something that doesn’t exist in Europe.

I make it to the monument around nine in the evening. I did some serious walking through an acceptable scenery. The monument is new, they replaced the old a week ago. Somebody left a bag of weed in the ammunition box that serves now as a trail register holding box. I sign it and try to eat something.

After that I go back to the last campsite on the American site of the border. I reach it at eleven in the night. I tested my sleep system in Switzerland but there the temperatures were much warmer. The last six miles I hike in my rain gear.

I can’t sleep because something is circling around my bivi. The ground vibrates too much, waking me up several times. At 3 in the night something is breaking wood, which makes a lot of noise.