This time I am wearing full battle dress. Thanks to a cash injection from my parents and some patience with local shops in Zurich I was able to bring together the latest and greatest winter hiking dress. If I don’t get an unpleasant encounter with wild animals, cars or thick brush these things will hold for years. My last rain jacket from the North Face held for fifteen years. After this time and regular usage the membrane was shot and there was serious delamination going on.

The rain is severe the entire day. I will keep the Gore jacket but this time, I wear something even better. Amer Sports puts it like this in the brand description: The central purpose is to build the finest products possible. Here in Switzerland it is also the uniform of certain politicians. I know of several members of parliament who wear the brand. The goal is to have something suitable for thru-hiking, therefore every ounce is important. My new jacket has no pockets but vents. Switzerland is not cheap. Expect to get the same product 30 % or more cheaper in Germany. As we are a small country a train ride of one hour will bring you there.

The jacket is made in China. They have higher minimum wages as Romania. Where the Swiss army gets their fighting boots produced by an Italian company with the name AKU. The shoe retails for 399 francs. That is more than the Romanian minimum wage per month.

The jacket however is of exceptional quality. I stay dry the entire day or twelve hours of walking with a pace of more than three miles per hour. The temperatures are above freezing. For the last two hours I wear rain pants.

In Kreuzlingen I follow the marked hiking path. I finally found an app with the hiking path network for free. I will follow the Lake Constance anyway towards the Rhine river. Soon enough I reach a slum. A visitor from the US apparently mentioned that in Switzerland even the slums are nicely cleaned up. That’s true, except there are no slums in Switzerland and very few trailer parks. What the visitor saw were small pieces of land you can rent to have a small garden. If you live in the city you sometimes don’t have access to a garden in front of your house. They even have a public bathroom with ash trays. Not that I want to smoke but in Zurich you will not find this anymore.

I enter the forest. Not before being warned from military trainings with live ammunition and I see the next Bunker.

It rains so I can’t use my ears to detect movements in the forest. I have the feeling that something is moving alongside with me but I know that my imagination plays tricks on me. Even if something is there: It could be a boar in the worst case. There was only one single bear sighting in Switzerland this year. It is impossible for this bear to move undetected to my current location. The forest is open and you can see for hundreds of meters. No boar in sight. One single road deer.

I decide that it is time to move down to the lake. Lot of pear and apple farms. Old farm houses with artistic timber framing, some of them centuries old. On the lake a lot of private cabins. The town of Güttingen is particularly nice. All fences in the area are made from the same company. In Kesswill the path follows directly the lake shore. People will cast their ballots in the canton of Thurgau about new curriculums in public schools on the 27th of November. And as the rest of Switzerland they will vote about an end of the nuclear power plants.

A huge German shepherd dog with a toy in his mouth stands on the path. He behaves exceptionally well and belongs to a young mother with her child. I bet her partner is wearing suit and working his ass of in order to allow her taking care of the child. I would like to be in her situation even if they have a huge house with a nice golf court styled meadow. In this part of Switzerland people have signs telling passersby that they own a robotic lawn mower. I have never seen such a sign in Zurich. Why would somebody care about?

I pass a farm with Galloway cattle. In Switzerland farmers have preferred other breeds until the nineties. Unfortunately the weather gets worse and so does the path.

I cross the town of Romanshorn they have an impressive park along the haven. All the boats are out of the water, railroad construction workers train how to drive excavators on railroad tracks. Used condoms on the street indicate the presence of street prostitution during darker hours.

Arbon is not as half as pretty. Lots of ugly houses. I call them default houses. I believe that in CAD software used by architects there must be a default design, maybe even a finished building design thought as a template. You see the same type of multi-party house all over Switzerland. They compete in a race for the ugliest house type with the pre-finished single family units of the contractors. You can choose your house in a catalog. The result is urban sprawl. Switzerland is in the middle of a building boom. As money is cheap to lend (low interests), lots of families build their own house. Trashing the environment and the beauty of the landscape in the process.

The young greens have launched a constitutional initiative against this problem. The poll will be held within five years. If successful, Switzerland will limit it’s building land to a certain level. New land for building will only be allowed, if the same amount of land is newly spared. Like in the forest: You are only allowed to cut down a tree if you plant a new one. 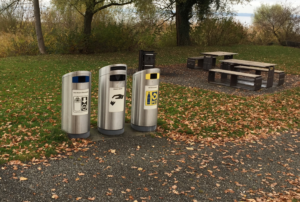 Arbon has a nature reserve between the town and the lake. You can tell by the trashcan design if a town has money. Every town puts up the trash cans they can afford. Arbon has only plastic fantastic. The pinacle of worldwide trash can design comes from Zurich. It is called the litter shark. There are bomb proof versions for Paris and there are bear proof versions for the Grisons. If you try to kick it: Your feet will be brocken before the thing has even a scratch. 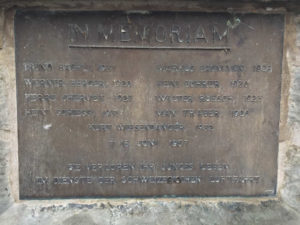 Young men died in the service of Swiss aviation

As soon as the trash can design changes you are in the next town. Before I come by a little memorial sign. It remembers some individuals who lost their live “for the aviation of Switzerland”. If you are German speaking I recommend you to read a book from Roman Schürmann by the title “helvetic hunters“. The first sentence in the description goes like this: “The biggest air base of Switzerland is on the ground of the lake Constance”. Those souls remembered on this sign were however civilian pilots doing a training exercise.

Switzerland invested billions into their own fighter jet industry. I was part of a team that grounded the last attempt of the government to buy new jets in Sweden. We simply collected enough signatures to have a poll. The parliament then allowed a poll on this specific deal because they believed to get consent easily. They wanted to buy 22 Gripen type jets for three billions. But that was only the fly away price. The costs for maintenance would be over 10 billions. For Switzerland that is money thrown out of the window. Because of the size of our country we can’t defend it against foreign powers. Even with this 22 jets we would have only around 50 jets. That is no match for our neighbors. And we have huge deficits in defensive measures against cruise missiles. Before the first jet will be up in the sky his base will be in ruins.

There are a lot of camping areas on the route. You are however not allowed to use a tent. Instead you have to use a camping trailer. Also these parks are all in winter mode. The owners of the trailers rent their place for an entire year so they have to move their trailer only once in twenty years. It is a holiday home for those who can’t afford a holiday home. Often these parks are on the other side of the railroad tracks. In summer it must be hell.

The worst town so far is Rorschach. They don’t seem to care about the lake at all. They have a right-wing mayor. If you have a look at the town as a hiker you also know why. Men wear their trainer shorts on the streets. If you do this in Zurich the police will frisk you. The city leaves a run-down impression even from the shore promenade. Maybe on a sunny day there is more activity and no one sits around drinking beer. 12 year olds are smoking Marihuana while their colleagues are taking rowing lessons. The public bathrooms are adjacent to a Bunker. I sit on the permanent music stage and eat. If the police wants to control me, I will show them my GPS watch. It stands at more than 40 km of distance.

Then I loop in Altenrhein. My app can show me my position. It doesn’t look bad but I must have taken a wrong turn somewhere. I head out in the dusk into a nature reserve area. The entire day I was thinking that the vegetation and the small bands of forest on the shore of the lake must provide ideal living space for boars. I hope to see one or better an entire horde. Of course I don’t see one, not even from behind.

My headlamp was carried in my outside pocket for hours. I know that this pocket isn’t waterproof. However, the headlamp is. I find what I believe is the Rhine. It is only the old Rhine and it is man-made in the beginning of the 19th century. Rhine is Rhine I think so I start the horrible rain night hike. Soon it will be along a highway to Rheineck.

The map has even more horrible news: To reach St. Margrethen I have to cross again a nature reserve and walk along the highway. I don’t want to ruin a motorists day so I can’t use the headlamp along the highway. I think about changing the side of the Rhine and crossing into Austria. However, that would be 8 miles longer, so no thank you. It is not my style to walk with a headlamp through a nature reserve area. But what would you do? Once I see two pairs of eyes, probably road deer. And a woman comes in my direction. She appears to be nude in the dark but my rational mind tells me that she is just wearing tight rain wear.

The path is difficult sometimes. The cars constantly shine their lamps into my face. In the nature reserve I see fresh beaver traces on the trees. I reach the train station of St. Margrethen.

Paul Grüninger was a commanding officer. He dated back papers and therefore helped Jews to get authorization to stay in Switzerland. He saved thousands of Jews from the concentration camps and death. Next time I will venture into Diepoldsau. That’s were many of these refugees came through the Rhine.