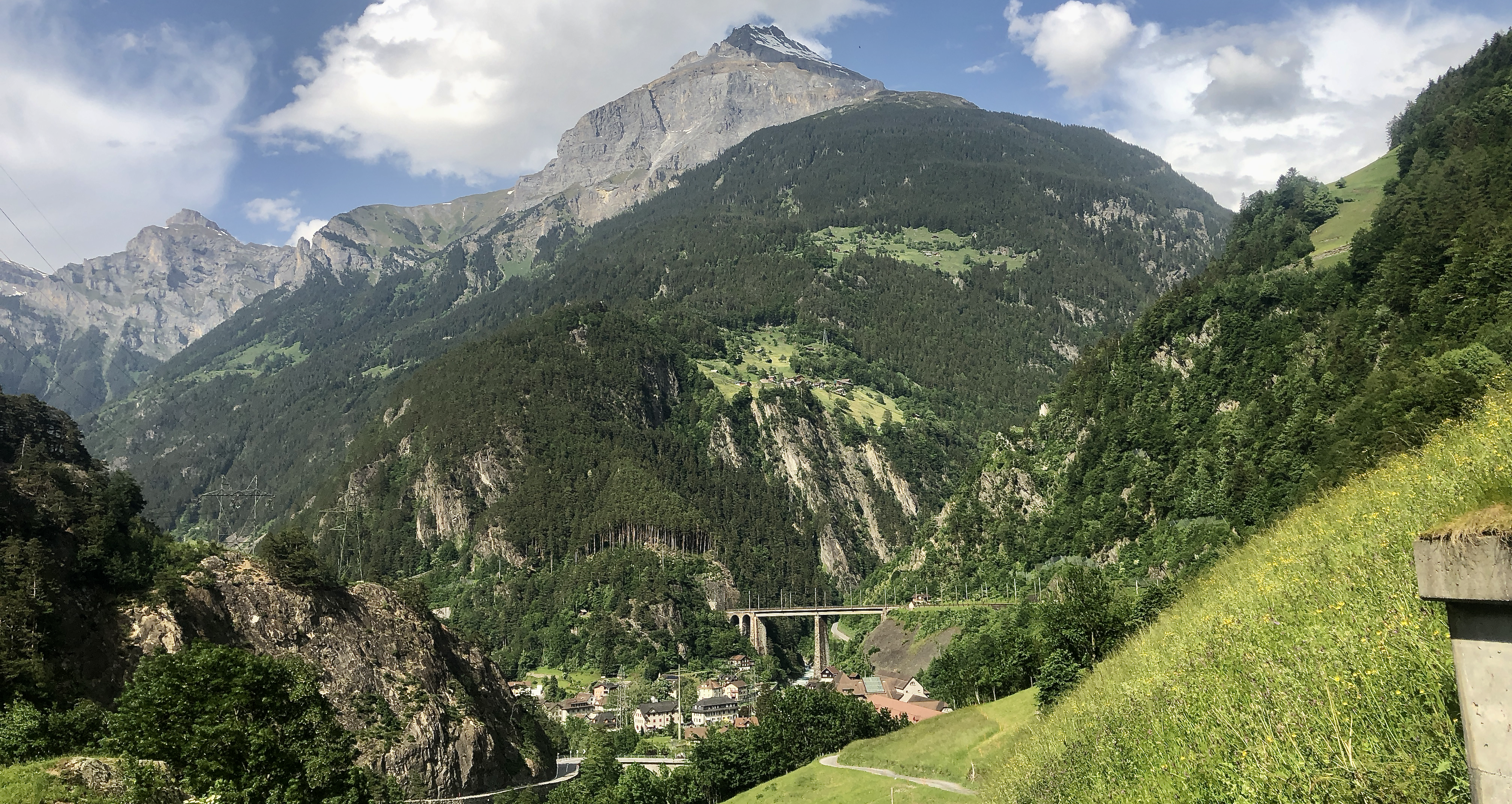 The weather cooperates with my hiking plans, so I get on trail where I ended up last week. Beckenried is one of the nicer towns but there are some showy villas on the lake.

These villas are for those who need four exhaust pipes on their Mercedes cars, as a car enthusiast I however know the difference between a three-year-old Mercedes and the newest models. In my endless wisdom I decided to wear Hokas again because of asphalt. And asphalt there is a lot today.

They still transport gravel on the lake as they take it out from the lake.

After Beckenried the trail allows himself to be a real trail for maybe two miles. There is a nice segment in a forest, steep but actual trail.

The way to Seelisberg – on the right side is the “trail”…

Way to soon we leave the forest and are back on concrete. There is a long ascent to Seelisberg. The lake view doesn’t compensate the endless roadwalk.

For fans of old heavy metal: Swiss made Saurer truck 5dm from the 60ies – still in use.

Neither does Seelisberg nor the descent on the other side. Down to the lake & to concrete again.

The Rütli. Another emotional highlight!

There is a segment off the “Weg der Schweiz” along the lake where the TST passes and you have a view to the Axen and the alp who is famous know, because our national TV made a documentary about the family living there. And the father, who fell to death while making hay in incredibly steep patches. For ordinary Swiss people this is like a second reality. Nobody in Zurich could even imagine such ways of making a living. 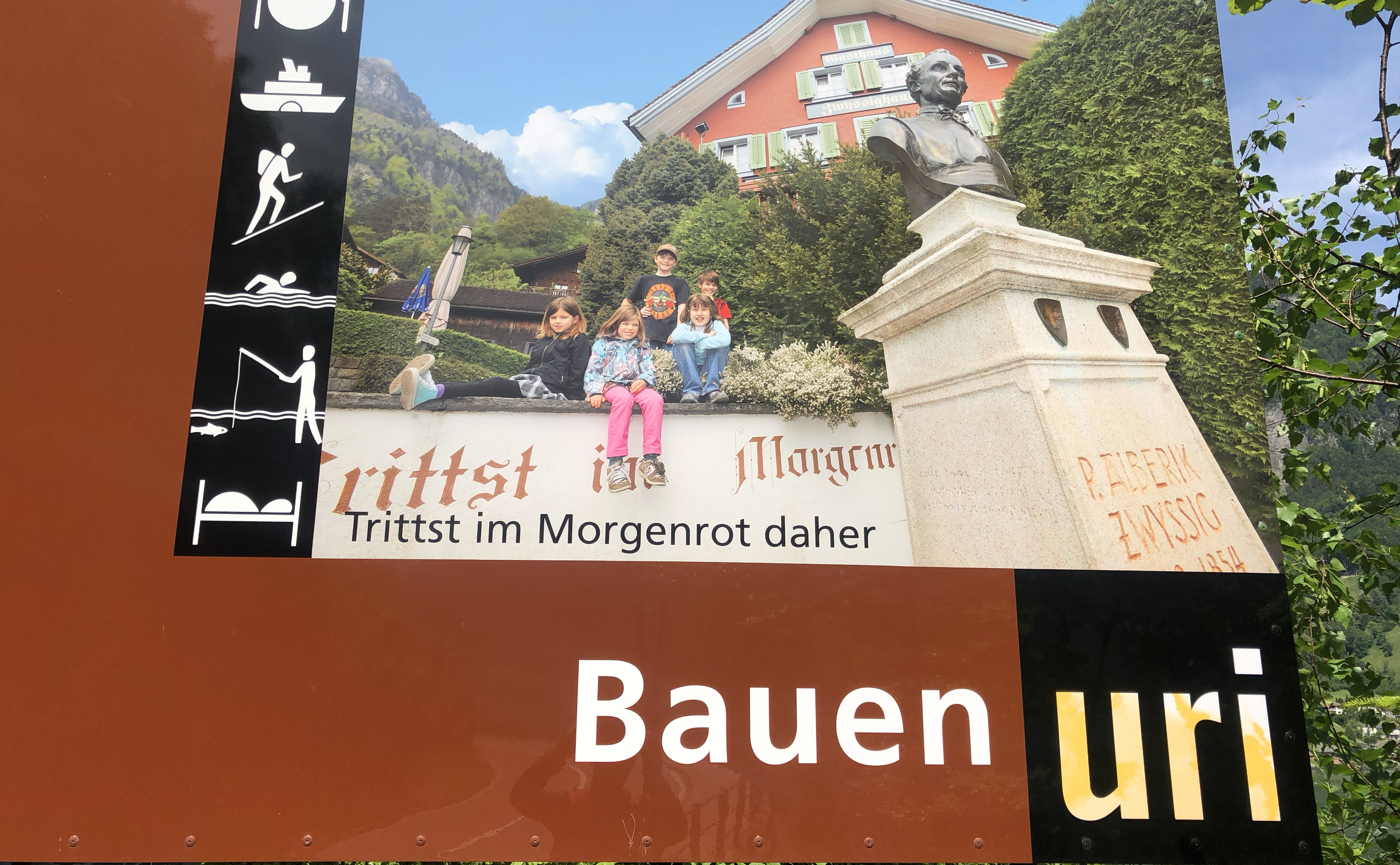 Have a look at the pullover of the boy! Guns n’ Roses where popular in Switzerland in 1993.

Like it would welcome you, the “Weg der Schweiz” enters a car tunnel for nearly half a mile, then you reach a former explosives company.

Under nets against stones you reach the Reuss, who is of course just a canal. We will never ever leave the main north-south connection until Belizona now. The way along the Reus is boring and dusty. The mountains are not that spectacular to make up with this kind of “trail”.

I remove a sticker from a neonazi-organisation. It says “Hands of from our women” which suggests that immigrants just come to Europe to touch “our” women. 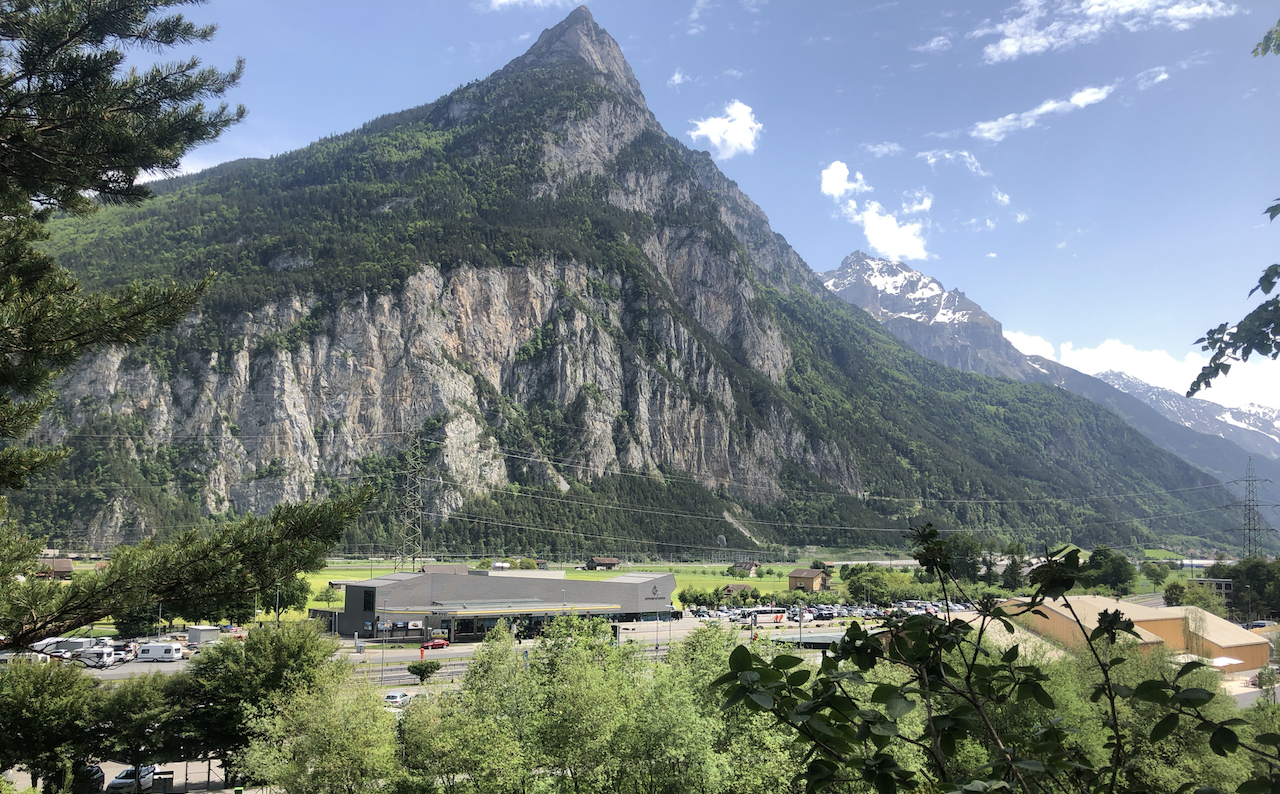 Gotthard service area. With my parents we stopped there as a family dozens of times on our way to the south or back for holidays.

Truckers waiting out the weekend

Erstfeld. The bridge in the middle of this picture was constructed out of military supplies to help with the construction of the NEAT.

After Erstfeld the path follows the railway line. This particular railway line is historic, as it crosses the Gotthard, something Switzerland was extremely proud off. Now it is obsolete, as we have built even a much longer tunnel underneath it. Still, every half mile you come across a sign who will explain to you how the bridges were constructed and so on. The Gotthard as a north-south connection is part of the national myth of Switzerland.

More than half of the TST summarized in one picture.

And as the valley gets narrow you find yourself hiking along the highway. There are a lot of hydro energy plants and I hardly manage to not get bitten by a hunting dog who keeps coming towards me again and again. His owner is occupied with holding her other dog and she manages to grab him after the third or the fourth attempt. Still this is maybe not a bad idea to live here, if you and your dog are that stupid as most people here know how to kick a dog in the ass.

In Silenen I come by the oldest still inhabited structure in the entire canton of Uri. There is history here but today the silent days for this valley are gone. Tourism got thrashed with the building of the highway in the 60ies. If you are a fan of empty hotel buildings, this is your hike.

It also rains, for maybe 10 minutes. I don’t even grab my rain jacket as I hope to get soaked a little bit. In Wassen I decide to have done enough for today and to be honest, there are not many places in Switzerland where you can hike for such a long time in such a hiker hostile environment. I had time however to find an overall statement for this trail. At least I found a room for the night for 30 bucks.

PS: The title pic of this post shows the entrance to the Maderanertal, which is already 200 times nicer than the entire TST!