Unfortunately, on the via alpina I start with cheating. I was already in Liechtenstein in the winter and the place is somehow hard to reach with public transport. Sargans is easy: There is a direct train from Zurich. Therefore, not even a section hike according to the book.

In the morning, I am in Sargans at 7:30. It was a short night. We did choose our candidate for the city government of Zurich the evening before and the celebrations went on until they closed the restaurant. My candidate won. She was really happy about it – four years ago, she lost the endorsement of the party against a man because of two votes. We all believe she has excellent changes to get our second seat in the government back. The candidate from 4 years ago ended up making 5000 votes too few to get elected. He is still somehow controversial within the left parties. And you need these votes from the left to get elected, if you are a candidate from our party. The elections will be held in march next year.

From Sargans the Via Alpina leads into the Weisstanental. It is boring and neat at the same time. Thanks to my running form I just start to run when it gets too boring. In this valley, the alpine ibex was reintroduced in 1911, after it was nearly extinct. I even took a picture of the small remembrance plate. It is dusty and hot in the valley. The entire day I wear sunscreen and I drink a lot. The way is marked well but it is Switzerland after all. The most time you walk on dirt roads or over eroded cow pastures. 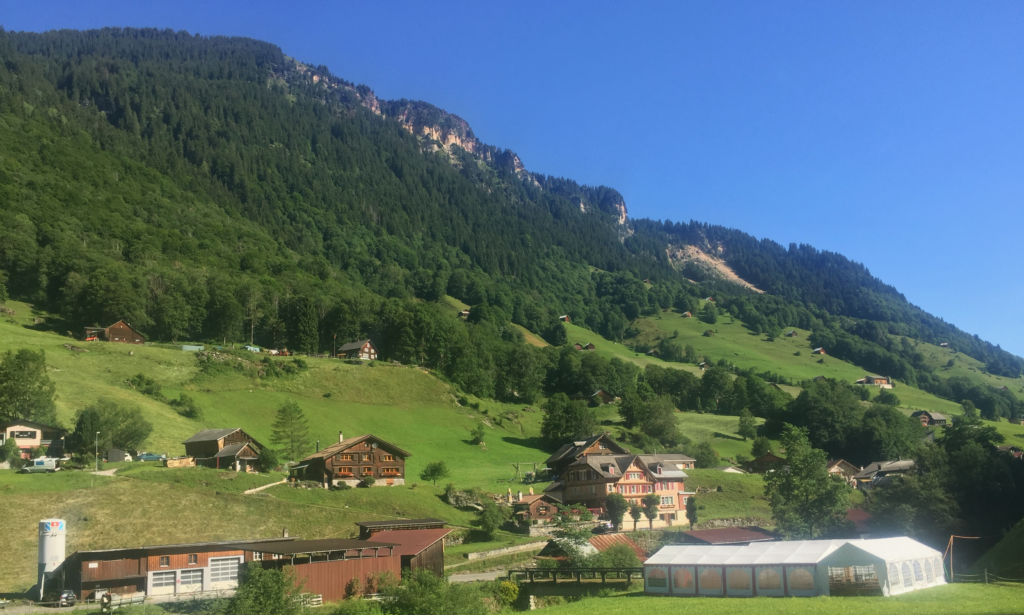 Inhabited since 1100. Until the 14th century they spoke Rhaeto-Romance here

Often, I have to take pictures because once you passed the last alp on the dirt road, the valley gets prettier by the minute. The rock faces are beautiful. Of course, I hope to see ibex but they seem to be busy elsewhere. It is an ordinary work day and not much hikers block the paths. For the office, I have to take a new picture of myself. Easier said than done. The better part of one hour is spent fiddling with inferior gadgets on top of the Foopass. However, I manage to get a decent photo of myself. 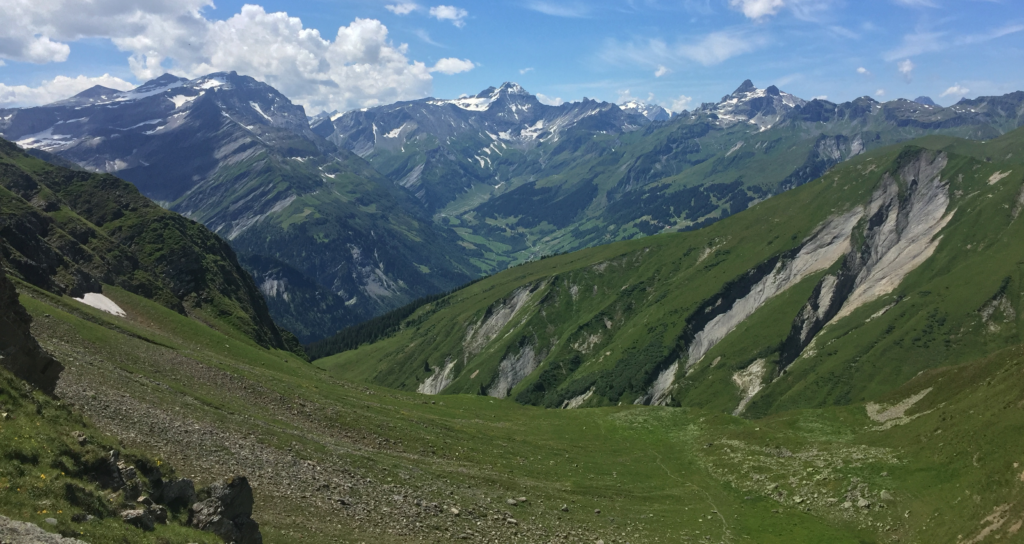 View from the Foopass in direction of Elm

I start the descent into Elm. Again, dirt roads, the usual Marmots and a lot of alps. Cows all over, even on the road. I reach Elm at 15:30 and find myself in a little time panic: If possible, I would like to reach Linthal before darkness and catch the last train. Through Elm it is again dusty and hot. Need to move much faster. Easier said than done after 8 hours of hiking and more than a marathon distance with 1500 feet altitude. Oh, and there is the heat. 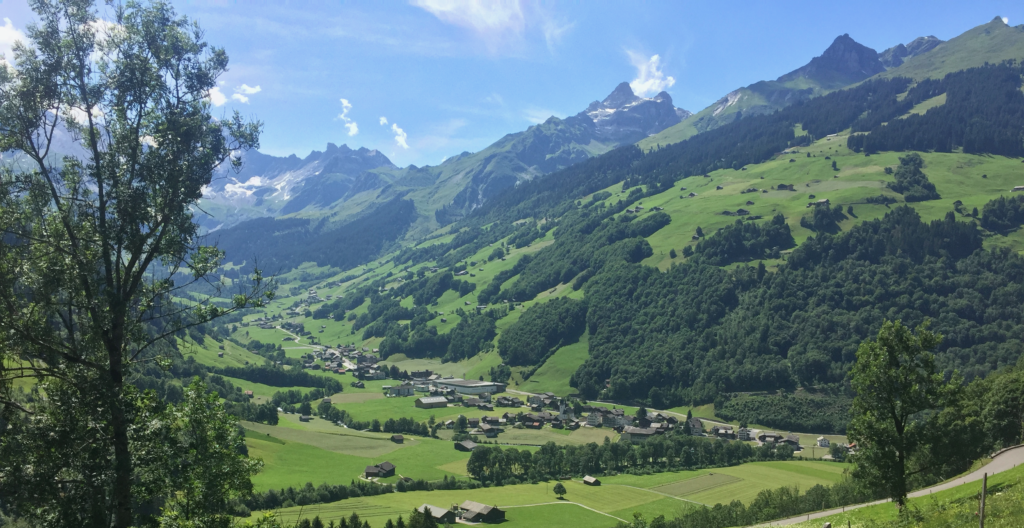 Elm. In the middle the Elmer Citro factory. I crossed out of the valley over the mountains

With great relieve I spot a sign at 16:30 that claims 6 and a half hours to Linthal. I am much faster than these signs. However, I am also exhausted. The view down to Elm is intimidating, if you know that you have to leave the valley again soon. There is like no way out but high mountains. I have to do it anyways.

I stop on a big fountain and wash my face. There was free sunscreen at our office but I can’t recommend it. It is like teargas in the eyes. The sunscreen is made out of a combination between chemical and a mineral filter. From the mineral filter, you get awful white residues if you sweat. No more ultrasun please, I prefer daylong, factor 50+.

The next problem is my appetite or better, the absence of it. I didn’t eat the entire day so far. Just two gels, they don’t give you much. I nearly puke after eating a power bar. The beer from the evening before must have gone by now. If I could walk until now, I may be able to walk some 6 hours more. The path gets better and clouds block the sun. If I am good at something it is climbing. I actually enjoy it. You can lie with your weight into the poles and for one second you can relax a little bit.

There is a new game I play with myself: It is called strategical drinking. If I drink according my thirst, my body sweats everything out within minutes. The sweat then drips from my head to my legs. So, I drink less and only if I fell a little heat congestion. When running down from the top of the pass, this tactic is somehow dangerous. I can’t stop every time I fell my body getting hot. Drinking with the hands in the pole loops is a receipt for disaster, even with the drinking hose. The solution for this problem is simply to watch out for some shade and run slower in the shade. Cows also like shade.

And there are the small drainage ditches that run across the dirt roads. They can catch your feet so you don’t want steep even near them. I run a lot of times. Every time it is flat or downwards. Otherwise I would use too much time. There is no point of arriving in town on 2 am. The absence of a sleeping solution strengthens my discipline. If I had a quilt and a bivy bag, I would easily spend weeks up there. Elm is somehow famous in Switzerland because they produce the Elmer Citro, a lemonade. It tastes like Sprite but more natural. I even walk along the factory. 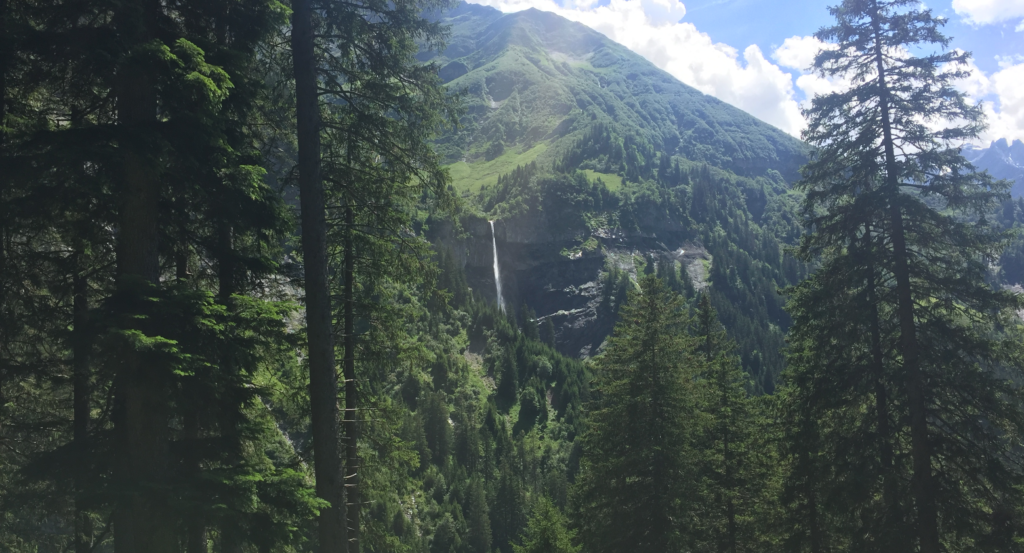 Elm has spectacular waterfalls. Everybody takes photos from waterfalls on the AT. It is a question of perspective. In Australia, along the Golden Coast, they have parking lots for real tiny waterfalls. Then Vreni Schneider is also from Elm. She was a famous skier in the 80ies and 90ies. Today she has a Ski- and Snowboard school and two gear shops. As Elm is really tiny, I walk along her gear shop as well.

Like in so many touristy towns in Switzerland, the time seems to have stopped here 50 years ago. Here and there are closed hotels and shops. No more tourists. Egypt was cheaper, now they go to Spain because of terrorism. Sad for the mountain towns, good for me. I manage to cross Elm in a reasonable time. And to climb to another alp in even better time. They bring in their cows, back to the stable. Farmers grab their cows by the horn and steer them by running with the cows. Have you ever crossed a yard between running cows?

The path gets incredibly steep after this alp. I have to cross a snowy river. There is no way I can walk over the snow. Even with heavy crampons this could be extremely dangerous because the stream has formed a cavity under the snow. Good luck freeing yourself, if you fall in. So, I do the old game: walking down on one side, up on the other. I don’t see a soul. Just Marmots. 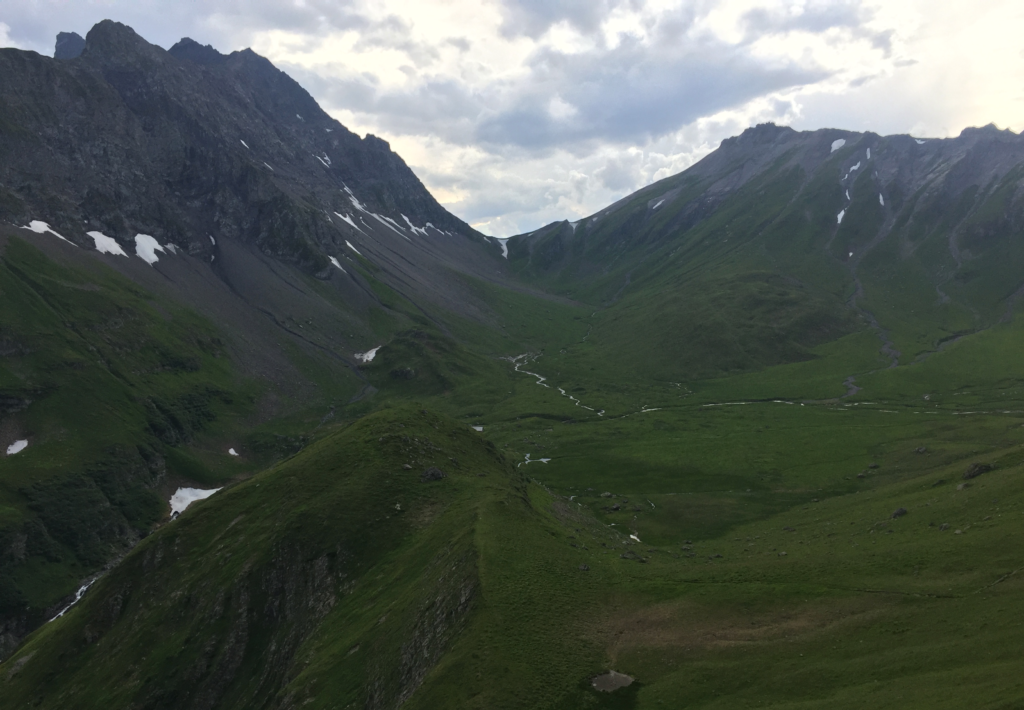 the last valley before the pass.

To test my patience, they have another valley just before the Richetlipass. I read a lot of reviews about this pass, most hikers prefer to take public transport through Elm. In the German language, there is an expression for this: Warmduscher. From the pass they claim, that it takes you 3 hours down to Linthal. Thank you, don’t have that time. It is 19:30 pm. I run down. It is extremely tricky because the path is overgrown and steep. I manage not to fall the entire day. 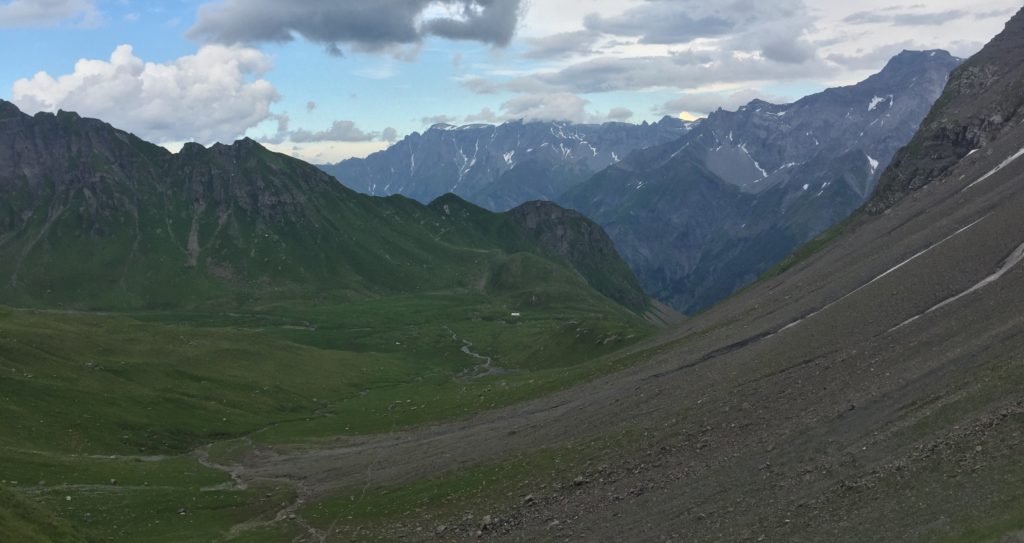 view from the pass backwards.

I wear lightweight shoes, which may cause some concerns by the friends of heavy boots. Hoka One One Challenger ATR 3. The outer sole is nothing to write home about. But it is something like a hybrid shoe. You can move with it on trails and on the road. I would prefer the Speedgoat 2 but it is not available, sold out in Zurich.

The salesperson at Och sport explains to me, that they don’t know why everybody buys Hoka. They had ordered just a small quantity and they have everything from Adidas, Nike and Salomon. And they have On. The percentage of their customers who does outings in the mountains according to him is under 1 %. Like everybody else, they have a lot of GoreTexed trail running shoes. With my Hokas I can enter small streams, knowing that my feet are dry within minutes. I do this several times on purpose to cool my feet. It even works fine.

Och sport was the only dealer that had the Leki Traveller carbon – the best poles on the market.

I reach Linthal in under 2 hours. My weight loos is a problem. Need to eat better next time.

Notable accomplishments: Didn’t fall from the mountains – didn’t fall in general – didn’t get a heatstroke.