Through the wild Entlebuch

After spending two weeks doing nothing, I finally could move again. I cured my shin splints pretty aggressive and I’m happy that my legs cooperate again.

Two weeks ago, I tried to walk again around the lake. This time I did the mountains tour, away from boring asphalt and boring houses. Unfortunately I went into the city the day before. Above average walking skills and small leather shoes do not match well. I love these shoes but they are too small for me now. So doing these 43 miles around the lake, my left shin did strange things and it hurt. My pace was much slower than it should be and I was forced to cut my journey short. The last seven miles back into the city would have been all downhill.

I was forced to sit out the long easter weekend with no movement. Something I did not like. Financial considerations have me to visit an office during the week so I’m a weekend warrior now. It does not hold me away from walking or running like serious on the weekends.

Careful planning makes for an interesting route. So I decided to walk through central Switzerland. The first train in the morning brought me to Langenthal. This town is special because it is the most average town in Switzerland. The size, the population, the income of the households – everything is average.

Not five minutes later I see their relatives in the forest. They must be used to humans because they do not run away. It’s a couple of road deer and they just look at me. Not even 50 yards away I see a fox. Another fox is coming in my direction. As I move silent, I clap my hands to disperse them. I pass a waterhole in the middle of a forest. In 1845 they wanted to build a railway line and had to test the underground – the hole was never filled since then. 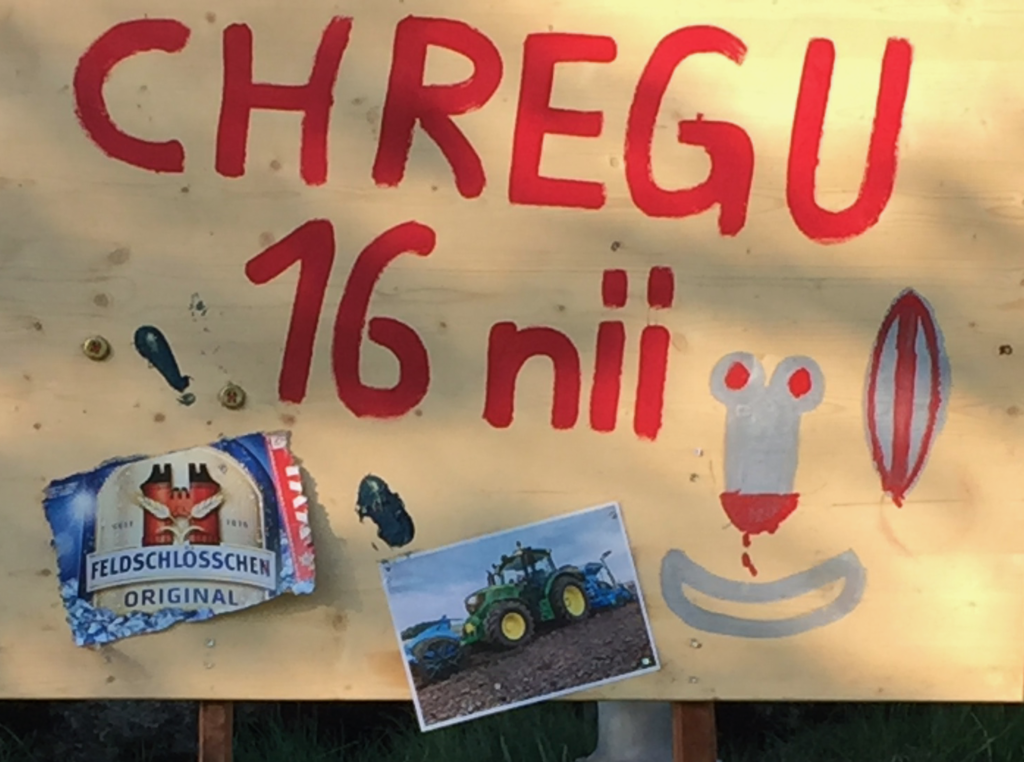 On the way towards St. Urban I came across this sign. Somebody became 16 years old. They drink beer at this age and the artwork shows his main interests as a young farmer…

Before 10 o’clock in the morning I got 10 miles in. It’s the first time I wear Altra Lone Peaks. This shoe is popular with serious hikers. Lint uses them and he did more than 30’000 miles. He is one of just a hand full three time triple crowners. This means he has done all three big hiking trails three times. So, he clearly had enough time to test a lot of shoes. Anish uses them. She is the fastest hiker in the world, currently holding three FKT‘s. Anish used them on the Barkley Marathons and this year she managed to stay out longer than any other female. A lot of hikers switch to this shoe during their thru-hikes and they are happy. The latest prominent convert is Dixie, her Youtube channel has more than 30’000 subs.

These shoes are special. First of all, they have zero drop. Theoretically this enables you to use the full lever of your ankle. Normal running shoes have a thicker sole under the heel, therefore they cut your movement short. I wasn’t concerned about my achilles tendon as I run a lot forefoot, especially when climbing and I wear zero drop shoes every day (the leather shoes mentioned above). If you are used to wear sneakers, be careful. Altras have a natural toe box. Most running shoes have a smaller toe box. If you walk longer than 10 hours a day this can become a problem as your feet spreads out. They are also incredibly flexible. They don’t feel like a plank under your feet. You feel the ground as they are just stiff enough to prevent pain when walking over sharp rocks. I am seriously impressed. So are my feet. During the first 10 mile they had to adjust but afterwards everything was fine. I like them more than everything I had on my feet so far.

Everybody I saw hiking yesterday was wearing heavy boots – designed to walk through gravel fields for weeks. As longer as I hike in this thru-hiker style, the less I get why this should be necessary. Yes, there was the last snow and mud but I didn’t have traction problems. I walked through grass and my feet were getting wet. And they stayed wet for the next five minutes but after this they were dry again. I seriously think about getting orienteering shoes for crossing snow and ice.

The weather was great. Warm enough to dress light and cold enough to not sweat. I wore shorts, all others I saw were wearing jackets. But they moved all much slower. An older lady asked me if it was not a little fresh. She was a little heavy on her legs and I bet her car stud just a little down the trail.

I read all the signs as this was a regional route suggested by Schweizmobil. The route went along the border between the cantons of Luzern and Bern. It was fascinating. Signs about the border. 500 years ago they had a conflict as both states grew. Luzern joined historical Switzerland in 1332, Bern in 1353 but they still had problems with each other. So they planted oak trees along the border. The tree line is still visible, the oldest trees are 400 hundred years old. The trees do further enhance the dramatic impression of the landscape. It is hilly. The first 10 miles are not especially interesting despite the fact that you feel like in medieval times. Small farm houses are scattered in the landscape.

Then I reached Huttwil. I was greeted by a car with the word “Eidgenoss” on the back window. There is a musician calling himself Eidgenoss, but it’s also a right-wing way to express your own Swissness. While you can eventually get a Swiss citizenship through legal procedures (although it is really hard, harder than in most other countries) the word Eidgenoss suggests that you are coming from a real Swiss family, something somebody who just has the papers will never reach. It is stupid and mean.

On the way to Huttwil

They also have a war memorial for those who died during the first world war. Switzerland was not attacked, therefore there was nobody killed in combat. They just list the people who died during active duty, most of them through illness or through accidents. 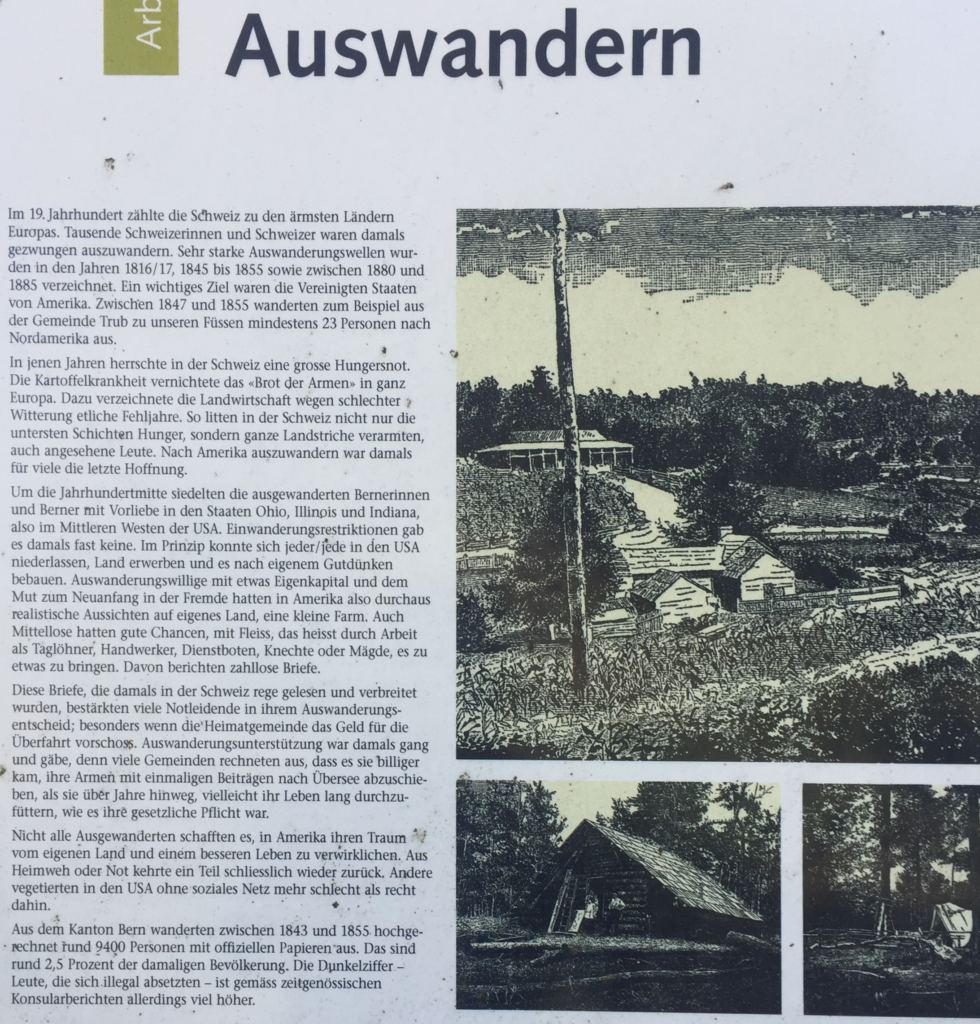 Another sign on the trail gives an insight of Switzerland in the 19th century. Switzerland was one of the poorest countries in the world. Farmers had bad luck with the weather, the people were hungry. So they left Switzerland and went to the US. The entire area had much less forest during this time. The mountain farmers were extending their alps by harvesting wood. And they needed a lot of wood because everything was steam powered. 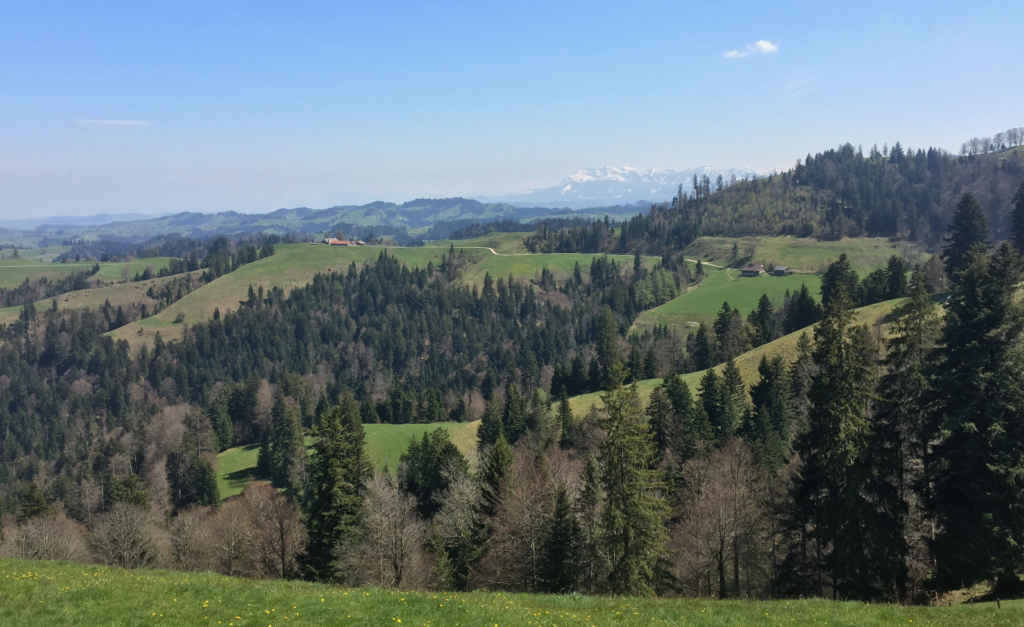 The way follows the ridge line and I can spot chamois below in the ravine. Not short after I come across a man in heavy outdoor gear, scanning the surroundings through binoculars. He is just over prepared. I would not be surprised if his backpack was from Martin Baker. But he doesn’t seem to be an official hunter or ranger as he seems ashamed when I pass. So I don’t tell him were the chamois are. 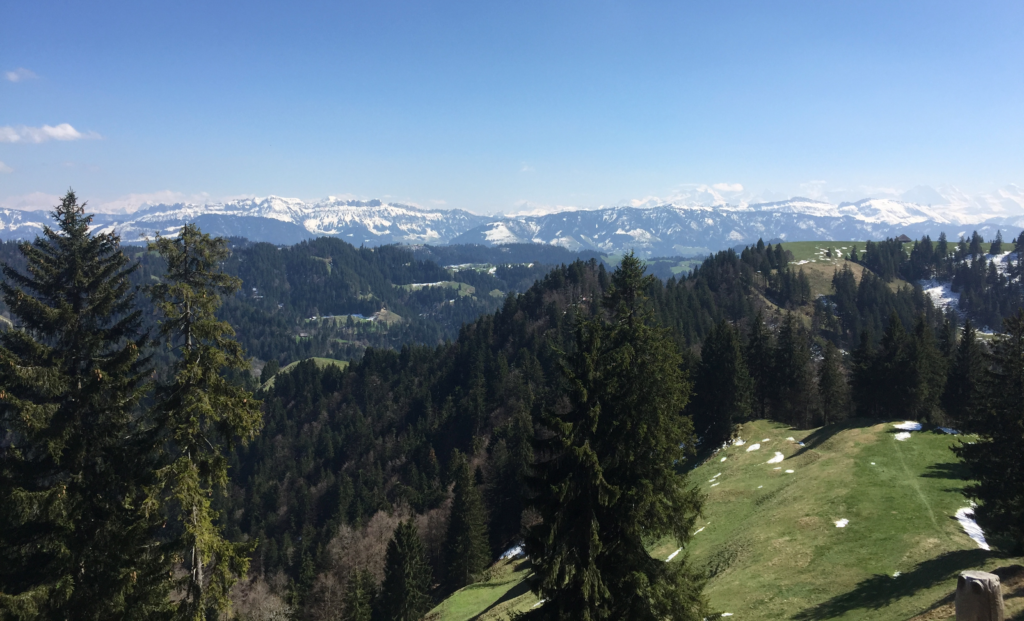 On top of the Napf there are many tourists. They have not done 27 miles so far. For me the question is where I want to go from here.

I decide to go to Rormoos and I try to be faster than the time indicated by the way signs in order to catch the shuttle. I fail. The sky got cloudy in the meantime. There is one hour of daylight left. I saw many deer on the way down.

A farmer tries to call his cows into the barn. They can’t hear him because they wear heavy bells. Poor farmer has to climb up his patch to get his cows.

I can now wait for another one and a half hour to the next shuttle or I can hike on. There is a hotel in the town but I don’t want to spend an evening with older motorcycle drivers. So I hike on. I know that I will likely beat the indicated time. Or I would pull out my personal daylight. I need to buy a lighter one as my headlamp just gives too much light (850 lumens). I feel sorry for all the animals I pass. You see more with this lamp than during the day. The dogs are much smarter here than in the Toggenburg. They bark, but they also stop to bark and they give you room to pass.

I finally make it to Entlebuch. A small town. On the railway station there is the town youth. They listen to Trance music or Eurodance I listen to twenty years ago. They are no treat to me as they are clearly antifascists. At least their jackets are. They smoke wead and they had already a beer or two. They go to Lucern to spend the evening and probably the night also, returning to their mountain town in the morning.

I’m happy with the 37 miles I did and I’m even more happy to report the absence of shin splints as I write this.

I did 7300 feet of elevation. It was up and down the entire time and I kept myself entertained with turning on my poles in the air during descents and lifting myself up by flying like a pole vaulter in climbs.

previousI should have done this earlier
nextGeting serious