The weather forecast was bad. So, I decided to get up at 3 am and try to do something before the bad weather moved in latter in the day.

There is a new Isostar endurance drink. This time with tropical fruit aroma, it tastes like passion fruit. My excitement about it, is limited. They gave me a little bag for free, containing the powder for half a liter of it. Why are these bags not available as a regular product? Well, I tried to open this bag in the field with sweaty hands. 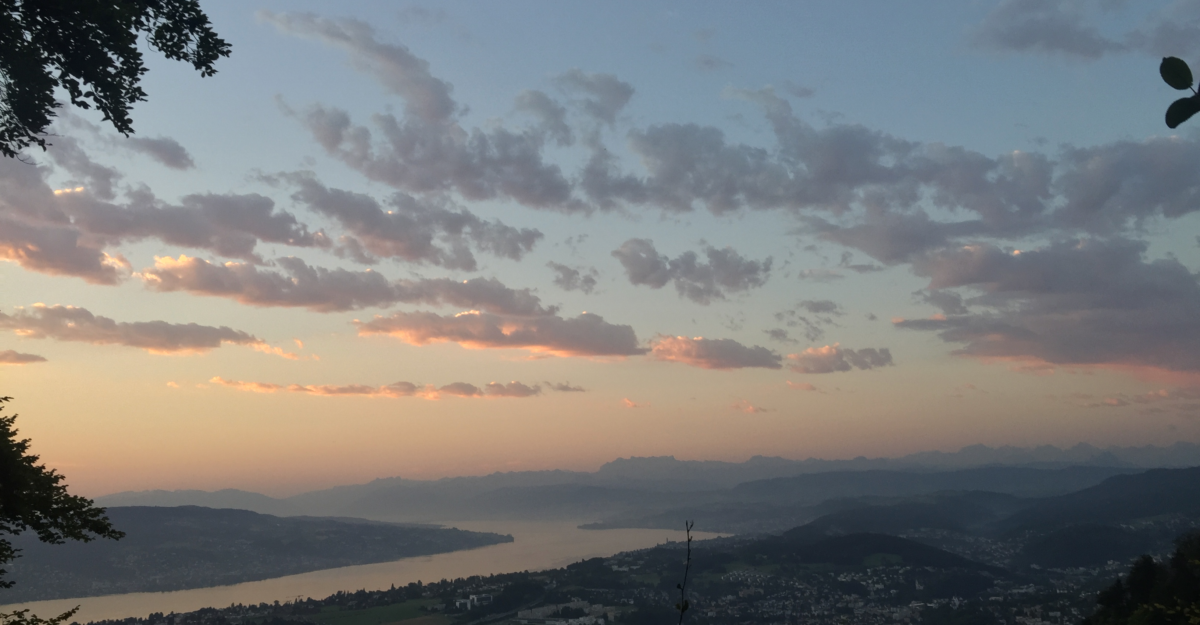 I have no goals today, I just want to get some miles done. The lake is not tempting. There are lots of places I do not look forward to cross. There is however a place where you can see the lake of Zug and the Lake of Zurich at the same time. And you can see the mountain Rigi. The Rigi is famous for two reasons. It has two rack railways to the top. Tourists can get up on one side and continue their journey back down on the other side. In winter, there is a nice sledge run down. The Rigi also stands somehow isolated at the beginning of the higher mountains. No wonder the first hotel on the peak was built in 1816. It’s a tourist wonderland, they have a partnership with the Chinese mountain Emei.

I spontaneously decide to do an attempt on the Rigi once I reach Schweighof, just before Sihlbrugg. I run down to Baar and then I follow the lake of Zug, kind off. 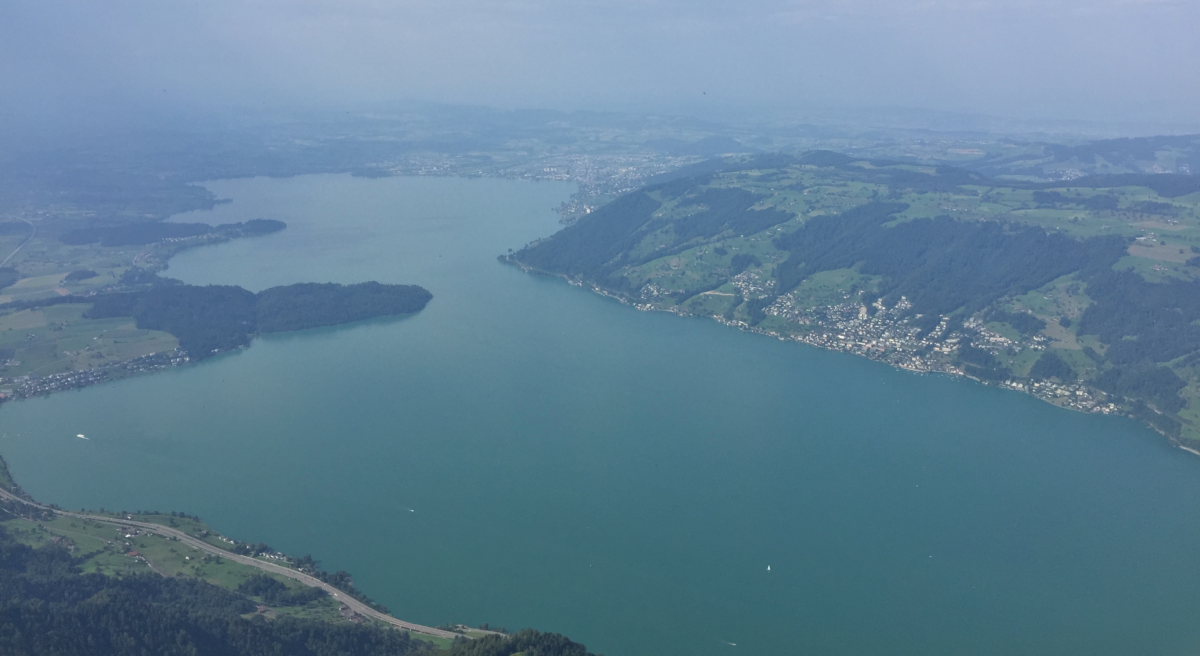 Followed this lake on the right side. View from the top of the Rigi

Apparently, the temperatures reached a record high. My watch says they reached 98 F or 37 Celsius – today the newspaper report 34 Celsius which is still more than enough. To Zug it is marathon distance and I take it slower through the city.

I can’t care about the temperatures, I am more concerned about the first of august being the national day. Sometimes it feels like moving through a war zone because of fireworks. Serious historians will agree, while the founding of Switzerland in 1291 is a nice story, it is more a myth than history.

Because it is a nice day, lots of people are on the streets. The harley drivers with their overpriced, stinking machines. All kinds of oldtimer drivers polluting the air. People have strange hobbies, I am no exception. There is a lot of road running along the lake and later the path moves away from the lake high up into the woods.

Normally I would just resupply with Gatorade or similar. Today, I am out of luck. No stores on the path or closed. So, I drink out of small streams. No filter, but I can hear the cowbells all the time. The lack of electrolytes is a problem, the lack of a proper marked way up to the Rigi too.

The way is just ugly. Cow swamps all over. I take a less popular way up and it remains filthy all the time.

A pro tip: If you don’t like cows, don’t even think about hiking in Switzerland. All cow patches are eroded thanks to overgrazing and too heavy cows. They are not adapted to the environment. And the patches are full of manure.

I am no expert but the way these alps are farmed can’t be sustainable over a longer period of time. The idea is of course not to give the mountain farmers a hard time or to take away their income they make with the milk. But why is it not possible to reduce the weight of the cows by using other breeds and to compensate it with more direct payments by the state? Using lighter cows would solve many problems.

Meanwhile I reach the top of the Rigi. Just in time: As I sit in the rack railway down, clouds move in and it starts to rain. 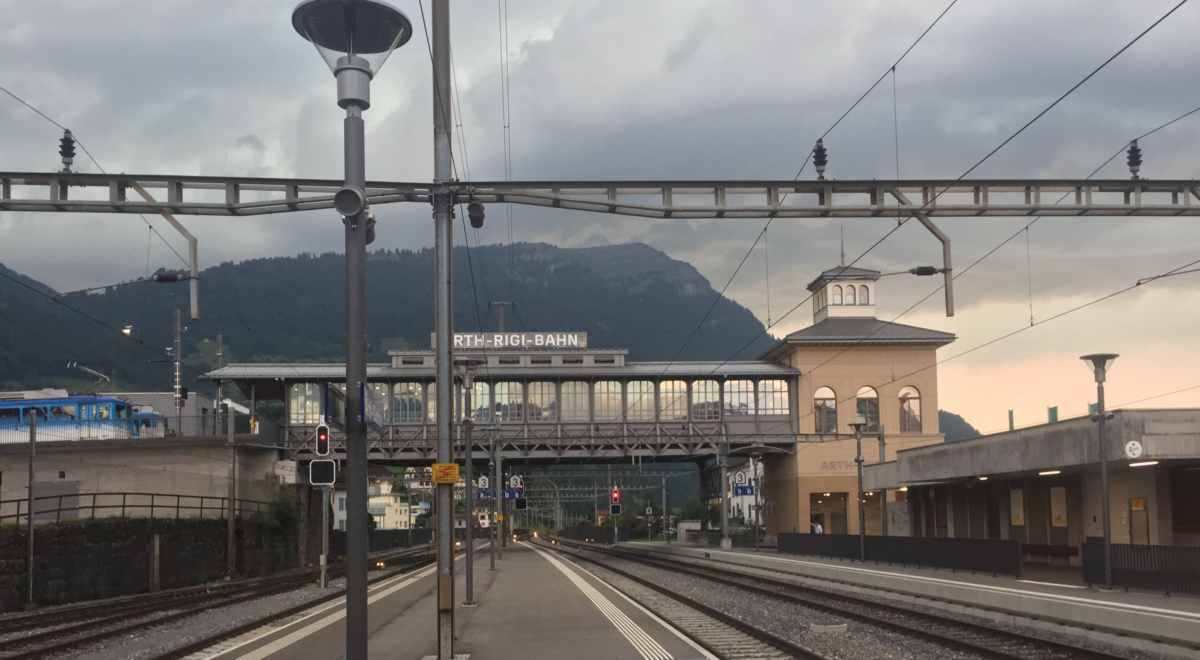 This was part of my ordinary training as I can’t sit at home waisting an entire day. I will attempt the next part of the Via Alpina ASAP.