It was a spontaneous idea on a Friday evening: go hiking. All kinds of considerations have me staying within two hours of train ride. Therefore, its heading out to lake constance again.

Dogs were the thing that bothered me the entire hike. I don’t want this to become a wailing wall or whining the entire time, therefore I use the first few sentences on dogs. I love dogs. At one point in my life, there was a dog called Lola. She was an old lady but incredibly good trained. She knew the traffic rules and stopped when the lights were red. Never she had to walk on a leash. She was just a happy dog and never barked at people.

My jogging route here in Zurich goes through the former common land. It is like a park where the professional dog walkers go with their dogs. Every dog in and around a big city gets it quickly – there are so many people, you can’t just run up to every jogger or you would have an exhausting day.

The route I took this weekend let me through the Appenzell and the Toggenburg. In this remote part of Switzerland, the landscape is dotted with small mountain farms. They have like 12 cows, some goats and pics. Just a little bit bigger than the farms in the Surselva but also they live from governmental subsidies and the farmers have a real hard life too.

And they have dogs. Every farm house has a dog. In Appenzell and Toggenburg, they have their own bread of dogs. The Appenzell cattle dog. They roam freely. Unfortunately, they are not exactly smart. It’s more the opposite: They just bark the entire day. They bark about everything. They come to you to bark at you. They bark because their neighbor barks. They bark because they like to bark and to do something until the next opportunity to bark on comes in their view.

If you are in the market for a dog that barks, look no further. This kind of dog is ideal for those who hate everybody and don’t like to be bothered by neighbors and so on. It was supper annoying. Getting by free roaming dogs who bark at you is good for your self-esteem and you realize that you can walk towards a barking dog without getting bitten. Some of these dogs were in shabby conditions. Overweight, dusty, coarse fur, the claws too long. When I took a break from walking I could hear them barking all over the valley.

Apparently, the Bernese Mountain Dog is much smarter although he looks like a bigger cousin of the Appenzeller dog. These hipsters for example, seem to have one. I wouldn’t think about, what would happen if they would have a dog from the Appenzell. He would survive for only 2 minutes in the US. Even in the city of Zurich, these dogs would be downed by the Police.

Earlier, on the outskirts of St. Gallen, a dog owner was on the phone. She didn’t see me coming nor did she realize, that behind me there was another lady with her dog. Her dog took off towards me. He tried to jump on me. The German pronunciation of the word “halt” did the trick again. This dog would have a hard time in Zurich as he would be sprayed with pepper spray every five minutes. His owner would be facing fines. I was never more facilitated to finally see the lake of Zurich than on this hike. It means civilization also for dogs.

In St. Gallenkappel I finally meet a dog who was afraid of me but tried to attack me from behind.

I packed serious medical tape and Compeed blister cushions because I expected my feet to hurt again. They didn’t. This is excellent news. I could walk for 14 hours with very little breaks in the snow. It just made me feel great. This means also that I could possibly fit in the Norvan VT’s. I know, my brand loyalty is like a neurotic disease. 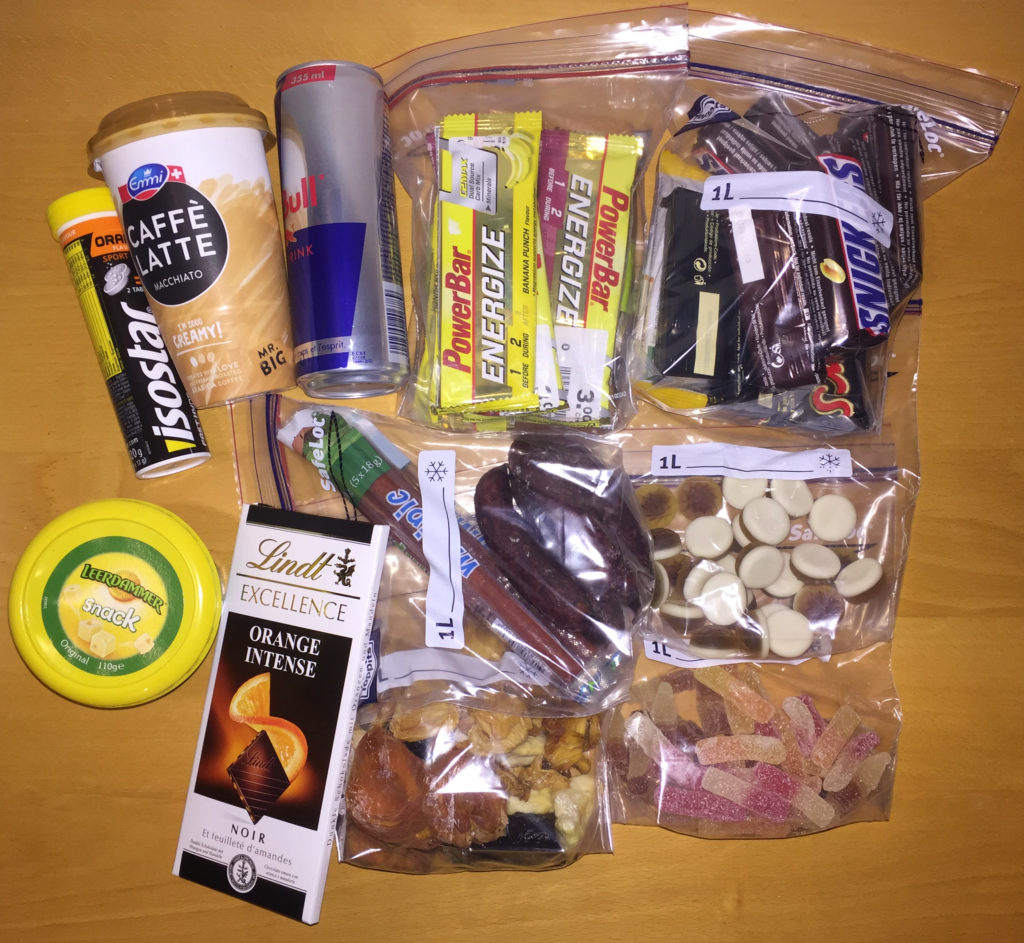 It’s could when I start to walk in Arbon. I follow my own route to St. Gallen the first hours. Shoots in the forest but no hunters can be spotted. Snow, just compact snow and icy streets. The Cascadias work well. I’m happy about wearing the Cascadias instead of the Hokas. The Cascadias have more grip and are less wobbly. From Arbon to St. Gallen wasn’t spectacular neither from St. Gallen to Herisau. 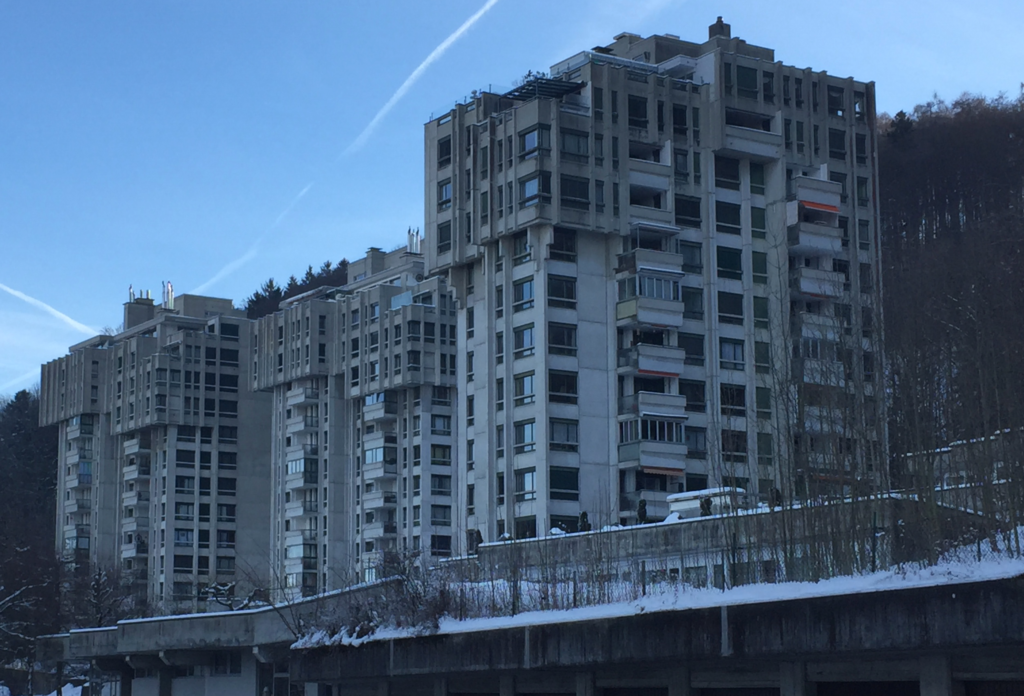 Residential building in St. Gallen – reminded me to Warsaw

Lots of people around, enjoying the sun. In January, we had less than 12 hours of sunshine in Zurich but I don’t know how it was in St. Gallen. It’s just a walk in the snow and my feet feel great.

I pass an old monastery. Last time I was here more than 25 years ago. The first buildings on this site are from the year 788, the monastery is from the year 1781. The nuns belong to the order of Saint Benedict. Mr Benedict of Nursia founded the monastery in Montecassino some when around the year 520. Montecassino was destroyed in the Second World War (by the allies) and rebuilt afterwards. It was a German who ordered all the treasures to be brought to the Vatican where they were safe during the war.

There are cows and they even have horns.

From the Monastery, you can see the city of St. Gallen. This city was founded some when around 612. I wrote a bit about the recent history of the place in previous entries.

I eat way too much powerbars and these power gums so I feel extremely awake the entire day. It will backfire during the night.

Herisau is spectacular. They have a huge army installation, but I feel insecure as they seem to have no tanks there. What would you do when the Germans attack? They have Duros. An army vehicle built in Switzerland. The parliament of Switzerland agreed to overhaul every one of them, regardless of the cost. There was only a small protest because the overhauling costs more per unit than they costed when brand-new. Some politicians claimed, there were no alternatives on the market and Switzerland still needed their own, tailor-made solution.  These cars were even dangerous in the past. At one point, soldiers feel out of them on the highway and died. And they are not extremely reliable. 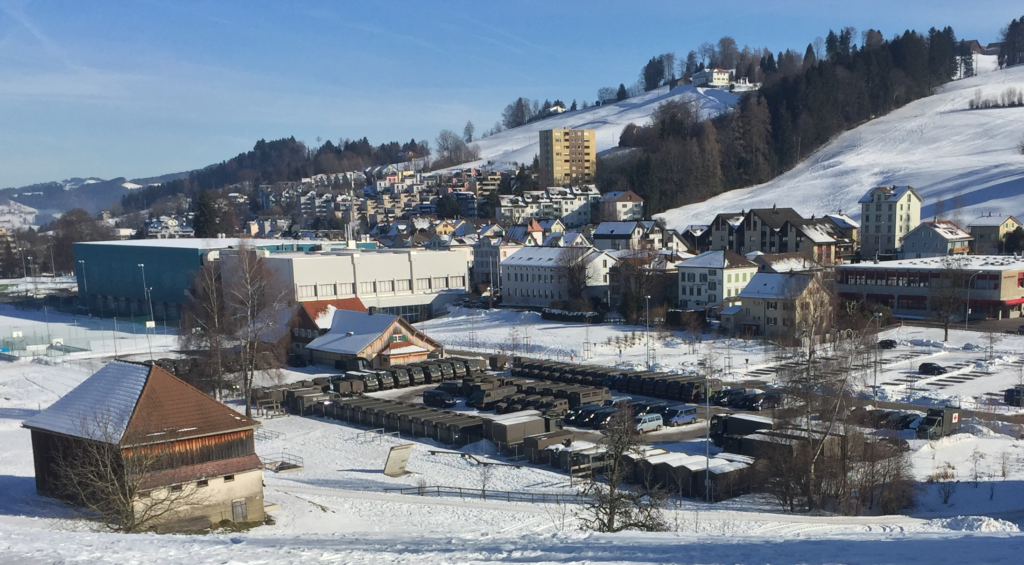 An army outpost in Herisau

In Herisau the old town looks like in medieval times. The streets are made of cobblestones. As a concession to modern times they have a china restaurant in a historic building, followed by an Australian one. A woman asks me to open her car door. I visit an outdoor shop, trying to find something to carry my phone. My super fancy day pack has no outside pockets and I can’t store away my phone easily. There is so much navigation to do, that I must carry my phone the entire day in my hands. My poles end up in the pack but they don’t do well in the snow anyways. You can feel the stress on them, so I use them only when going down ski slopes.

I need to go down and up again through the snow. It is 3 pm and I’m far from somewhere.

behind the smogy fog line on the horizon is Germany

Doesn’t matter, I have my NAO+. I turn it on in the forest. It is overkill. You see more than during the day when switched on level one but you have two more levels. I wrote to Petzl about to enable the red light only.

It is Wolf territory here and I hope to see one. Unfortunately, the Wolfs are not interested in greeting me and I can’t see anything wildlife anyways.

It’s just a wall going out of St. Peterzell. Doesn’t matter, I feel great after 8 hours of walking in the snow. The landscape is spectacular and it gets better by the minute. Unfortunately, on 8pm I decide to do road walking because of the dogs. The plan was to go to Wattwill and take the train back to Zurich. My phone dies in the cold and I loop. Once the street seems familiar but only for a short time.

I end up in Hemberg and I try to hike out again but this would mean, reaching Wattwill on 11pm. I don’t like to strand on railway stations so I ask for a room in the first hotel I see in Hemberg. From the outside, it looks again medieval but my room must have been redone recently. Everything is modern, LED lights and hypermodern windows (those 4 times glazed). The TV has a lot of stations from the middle east, but no traditional news channels like CNN or similar. The host of the hotel is a nice guy. Of course, I can’t sleep. The caffeine intake during the day was just insane. I reload my electronics and read about the newest follies of Senor Drumpf.